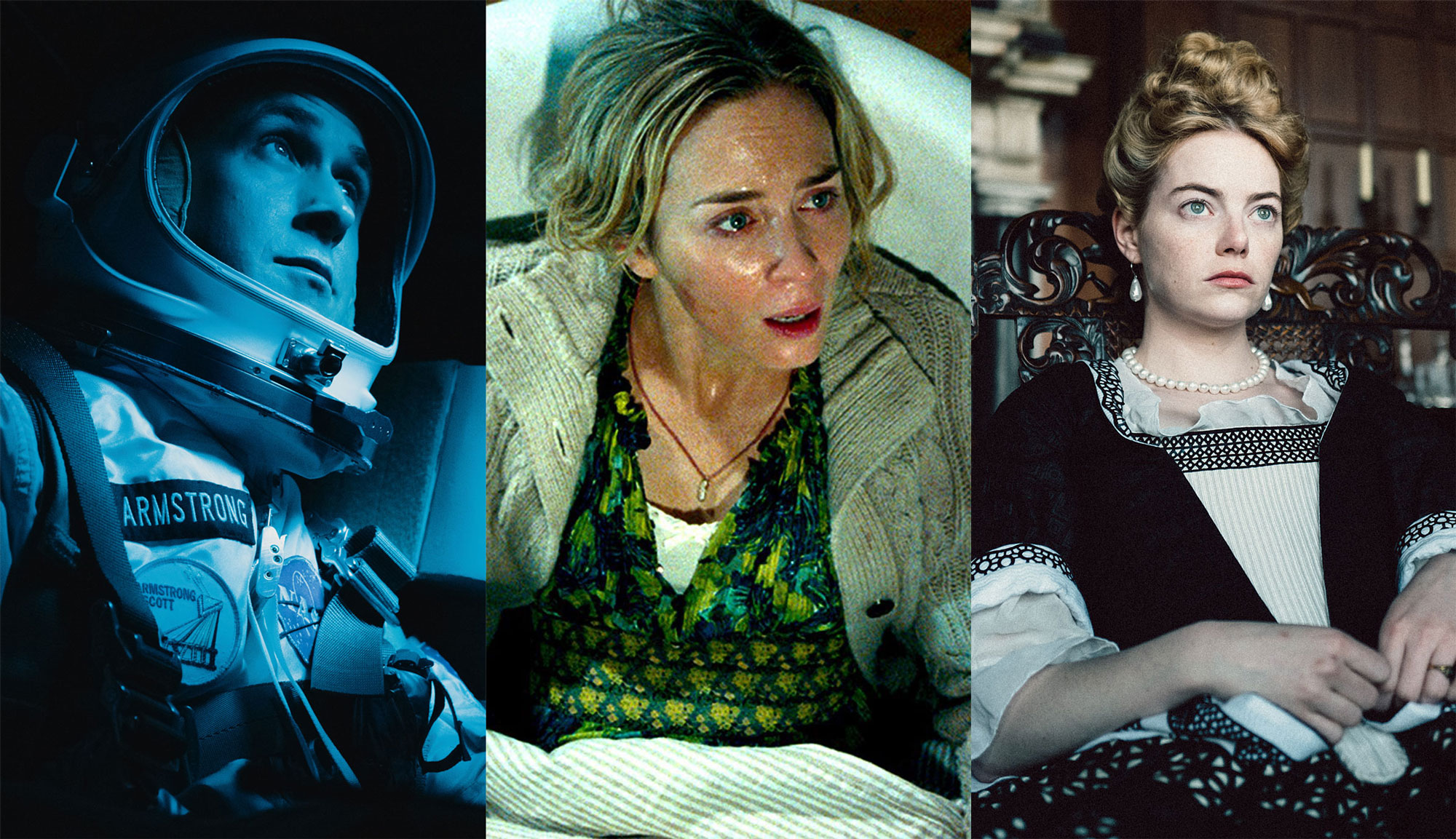 Another year has come and gone, and while the movies have mostly been good, this year’s crop differs from past years in that many of the major awards contenders (films like “Roma,” “If Beale Street Could Talk” and “Vice”) are so bang average that they didn’t even earn a spot among my top 25. Though my year-end lists have always diverged from the general critic consensus, the biggest takeaway from my 2018 review isn’t so much about what movies made the list but rather where they placed.

Bradley Cooper’s rendition of “A Star Is Born” may be Hollywood’s fourth version of the iconic love story (most closely resembling the 1976 film starring Barbara Streisand and Kris Kristofferson), but it’s arguably the best one yet. It was certainly an audacious choice for Cooper’s directorial debut, and though it’s not perfect by any means, the actor turned filmmaker proves that he’s just as talented behind the camera, especially during the exhilarating first act. The movie falters a bit in the back half due to some maudlin plotting, but it’s propped up by a pair of outstanding performances from Lady Gaga and Cooper, the latter of whom delivers career-best work as the troubled rocker. The rest of the cast (especially Sam Elliot) provide excellent support, while many of the songs are really good. For a movie that seemed destined to languish in development hell, “A Star Is Born” demonstrates that sometimes it just takes the right filmmaker at the right time.

In a year that marked Lady Gaga’s big screen debut playing what is essentially a fictionalized version of herself, who would have thought that Natalie Portman would out-Gaga the competition? Though Brady Corbet’s sophomore effort has divided opinion among critics, you have to hand it to Portman, because she really swings for the fences with her portrayal of a brash pop star at the height of her career, commanding the screen with one of the most captivating performances of the year. Jude Law and Raffey Cassidy are also good in supporting roles, but make no mistake: this is Portman’s movie the second she enters it at around the hour mark. The actress is an absolute force of nature, tearing through every scene with a reckless unpredictability that serves as the driving force of Corbet’s shocking, darkly comic fairy tale about the cost of fame and the power and influence that comes with it.

“Avengers: Infinity War” is the culmination of everything that the Marvel Cinematic Universe has been building toward for the past decade, and it sticks the landing in sensational fashion. As expected, the movie delivers big on spectacle, with several great action sequences that showcase the ridiculously deep roster of talent, but directors Joe and Anthony Russo make sure that there’s still room for brief moments of levity as well as heavier dramatic beats. Though the film is so jam-packed with characters that it was inevitable some heroes would get more screen time than others – and of that group, Iron Man, Doctor Strange and Spider-Man are the clear standouts – the real surprise is Josh Brolin’s nuanced performance as the genocidal Thanos, which gives the movie added emotional depth. The legacy of “Infinity War” rests on whether 2019’s “Avengers: Endgame” is a success, but if audiences have learned anything from Marvel’s first ten years as a studio, it’s that you should never bet against them.

Wes Anderson’s first foray into stop-motion animation, 2009’s “Fantastic Mr. Fox,” is an absolute gem that gets better with every viewing. It also happens to be one of my favorite films of the past decade, so imagine my delight when it was announced that Anderson would be making another movie in the same vein. Though “Isle of Dogs” is a more serious film, it’s just as good as its predecessor, kicking things up a notch both narratively and emotionally to deliver a richer experience. The voice cast (led by Bryan Cranston and several Anderson regulars) is also top-notch, while the animation is visually stunning and well-crafted. Granted, the movie isn’t as culturally sensitive as it could be – and that has proved a sticking point for some – but “Isle of Dogs” is an endlessly charming love letter to Japanese cinema and man’s best friend that’s bursting with the filmmaker’s unique personality.

“Black Panther” is a superhero movie done right. Though it services the larger Marvel Cinematic Universe, it’s a mostly standalone story that feels like it was made on director Ryan Coogler’s terms. Building on the character’s introduction in “Captain America: Civil War,” the film opens up a whole new corner of the MCU with captivating locales and personalities. Chadwick Boseman shines once again as the titular hero, and newcomer Letitia Wright delivers a breakout performance as his genius inventor sister, but it’s Michael B. Jordan and Andy Serkis who steal the show as two very different types of villains. While Jordan’s Killmonger is the more complex and memorable of the pair, that doesn’t stop Serkis from having great fun as the rambunctious Ulysses Klaue. “Black Panther” also boasts some decent action, a fantastic ensemble cast and the social awareness that you’d expect from a filmmaker like Coogler, all combining to produce one of Marvel’s strongest entries to date.

The “Mission: Impossible” series has had a long-standing custom of employing a different director for each new film, but “Fallout” breaks that tradition with the return of Christopher McQuarrie – which is fitting, since the movie operates as a continuation of “Rogue Nation” – and it pays off in a big way with one of the best installments yet. Though the movie is perhaps a little too long and complex, it’s also ridiculously entertaining, thanks in part to the excellent cast (including series newcomer Henry Cavill as the latest foil for the IMF team) but mainly Tom Cruise, who continues to push the limits of his daredevil stunt work with a series of jaw-dropping sequences – from a high-speed motorcycle chase through the streets of Paris to a bareknuckle bathroom brawl to a climactic helicopter duel. Simply put, “Mission: Impossible – Fallout” is the reason people still go to the movies, because it’s the kind of spectacular but smart blockbuster that warrants the full theatrical experience.

This wickedly funny costume drama from Greek satirist Yorgos Lanthimos wouldn’t normally be my cup of tea, but it boasts a trio of incredible, multilayered performances from Olivia Colman, Emma Stone and Rachel Weisz, who elevate the sharp, acid-tongued dialogue beyond just a few belly laughs. Colman has the juicier role as the emotionally needy Queen Anne, but for my money, it’s Stone who delivers the better performance; she has the stronger arc, with more shades to play, and many of the best lines. The male characters aren’t as well developed (though Nicholas Hoult’s hilarious turn as a pompous politician shouldn’t be overlooked), and that’s almost certainly on purpose, as this film is largely about female empowerment. It’s also one of the funniest movies of the year, and that’s to the credit of the performances as well as Deborah Davis and Tony McNamara’s clever script and Lanthimos’ wry direction.

Neil Armstrong isn’t the most engaging personality to get the biopic treatment, but director Damien Chazelle finds the humanity in his subject’s somewhat cold demeanor to produce a fascinating look at the early years of the NASA space program. Ryan Gosling delivers a deeply internal performance as the celebrated astronaut, while Claire Foy brilliantly balances out that quietude as his headstrong wife. Chazelle shoots most of the movie in intense closeups with a handheld camera, and it not only feels more personal and intimate as a result – like you’re standing in the room watching history unfold – but it makes the space mission sequences an incredibly harrowing and unnerving experience as the tension builds with every rattle and creak of the makeshift shuttles. “First Man” is at its best when highlighting the sheer terror of pioneering space travel, and if nothing else, it reminds you that these men weren’t just astronauts; they were daredevils who risked their lives in pursuit of knowledge and glory.

If the idea of a sequel to Denis Villeneuve’s 2015 thriller “Sicario” sounded like a bad idea when you first heard about it, you’re not alone. Though it was clear from the end of that film that there were still plenty of stories left to be explored, the risk of tarnishing its reputation didn’t seem worth the potential reward. Fortunately, “Sicario: Day of the Soldado” doesn’t disappoint, expanding its predecessor’s examination of the war on drugs to deliver a thematically similar but wholly unique experience. Writer Taylor Sheridan has created yet another compelling story, this time placing Josh Brolin’s CIA operative and Benicio del Toro’s steely hitman front and center. Both actors deliver excellent work reprising their roles, while director Stefano Sollima injects just enough of his own style without abandoning what made the first film so great. “Day of the Soldado” is pretty much everything you could want in a sequel, but the fact that it worked at all is the real triumph.

John Krasinski’s latest directorial effort is an incredibly well-crafted genre flick that remains the most enjoyable, surprising and poignant movie I’ve seen all year. Equal parts sci-fi horror and family drama, “A Quiet Place” cleverly uses the guise of an alien invasion story to explore heavy themes like loss and parenthood, particularly the lengths you will go to protect your kids from the dangers of the world – monsters or otherwise. The reason the movie works so well is because Krasinski makes you genuinely care about the central family and fear for their survival. Additionally, the acting is great across the board – not only from Krasinski and real-life spouse Emily Blunt, but also youngsters Millicent Simons and Noah Jupe – and the tension never lets up. “A Quiet Place” is a masterclass in genre filmmaking, and the fact that Krasinski pulls it off with minimal dialogue only makes it that much more impressive.