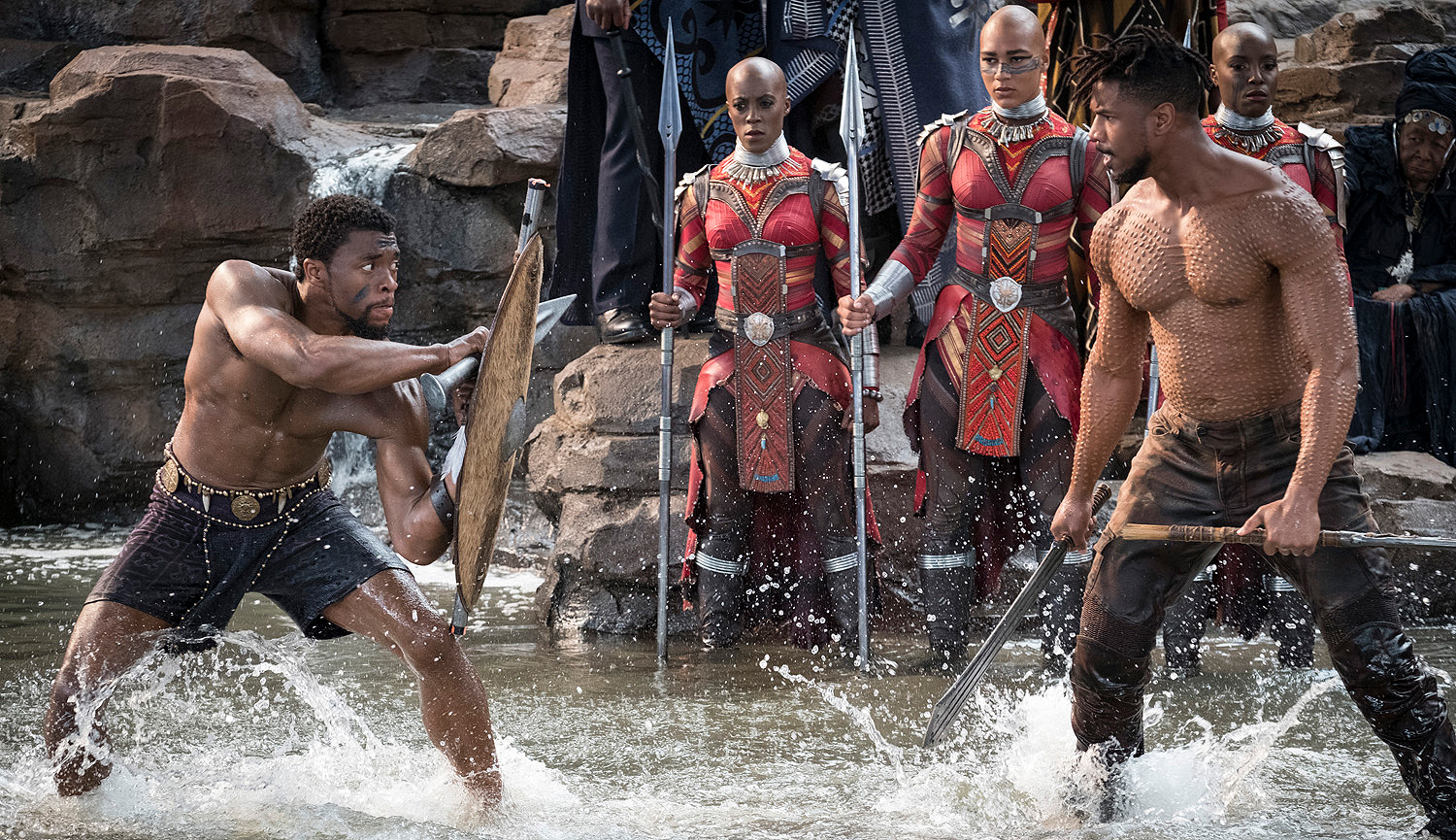 There is a lot to unpack in “Black Panther.” Solid arguments are made on both sides of the topic of isolationism versus open borders. An outsider armed with a dark heart and fiery rhetoric assumes power and literally burns sacred traditions to the ground. The governing body of the fictional country of Wakanda splinters, turning countrymen against each other. They’re not being subtle here: this is as Trumpian a movie as the Marvel Cinematic Universe will ever see (one hopes, anyway). On top of this, the movie is led by a group of strong women, who symbolically serve as the #MeToo component. “Black Panther” is so ridiculously of the moment that it’s tempting to believe that, between the perfect timing of “Zootopia” (race relations) and this film, Disney has “Minority Report”-style pre-cogs in its employ, scanning the future in order to read the room, as it were.

T’Challa (Chadwick Boseman) is still reeling from the death of his father T’Chaka (John Kani) from the events of “Captain America: Civil War,” but time waits for no king, and so T’Challa is thrust into duty as the new king of the filthy-rich, technologically advanced and completely hidden African country of Wakanda. (The rest of the world thinks they’re just farmers yet doesn’t ask why they never seek an ounce of financial aid.) T’Challa’s ex-girlfriend, Wakandan spy Nakia (Lupita Nyong’o), would like to see him use their resources to help those in need in other parts of the world, while Okoye (Danai Gurira), head of the Wakandan all-female elite guard, fearful of exploitation, would prefer that everyone else’s problems remain everyone else’s problems.

The three are united in purpose, though, when they discover that enemy of the state Ulysses Klaue (Andy Serkis) is planning to sell some of their precious vibranium (the metal that Captain America’s shield is made from and the source of all their wealth) to an anonymous buyer, and they travel to Korea to disrupt the transaction and capture Klaue. What Klaue doesn’t know is that he’s working with someone who has a much larger agenda than fencing vibranium.

The villain, Eric “Killmonger” Stevens (Michael B. Jordan), is a world-class, weaponized soldier. He cares little about Wakanda but lots about what Wakanda can do for him. His resentment for the Wakandan regime is understandable (he has motive, no question), but the country is more of a means to an (apocalyptic) end than anything else. This film is a giant middle finger to all things authoritarian.

Give director and co-writer Ryan Coogler credit, then, for one important distinction between Killmonger and, say, every Spider-Man villain ever: Killmonger has the courage of his convictions to the bitter end, without an ounce of reflection or second guessing. He is Terminator incarnate. No pity, remorse, fear, etc.

The cast may be loaded with giants (let’s not forget that Angela Bassett, Forest Whitaker, Sterling K. Brown, Martin Freeman and Daniel Kaluuya are also in this movie), but it’s Letitia Wright who steals the show as T’Challa’s younger sister Shuri. She is Wakanda’s resident tech wizard, the Q to T’Challa’s Bond. Gurira, taking a break from her day job as the katana-wielding Michonne on “The Walking Dead,” is not far behind, though.

However, when Q shows Bond a new toy, it’s because Bond will use it later in the film. Shuri shows T’Challa an awesome new item, after which it is never mentioned again. It’s a small thing, but at the same time, it’s the kind of thing that a director like Coogler should recognize as a flaw. (Perhaps the callback scene was cut because of the already long runtime of 134 minutes.) Another issue with “Black Panther” is that, as the eighteenth film in the Marvel Cinematic Universe, and the ninth origin story within the MCU, viewer fatigue is starting to set in. The shot locations may differ, but there is a sameness to the stories that is difficult to overlook. There is also a fancy, slo-mo overhead shot that Coogler uses one time too many.

“Black Panther” is a very good film, and it has a respect for foreign culture that no other MCU film has attempted. It’s both light and deathly serious, and it contains some intense man-to-man (and man-to-woman) combat. And yet, as we reach the end of Phase 3 in the MCU (there are four films left), it feels like it’s time to wrap this up. And to think, Marvel has six (!) films set for release over the next 16 months, starting with this one. That is ambitious. Possibly suicidal.