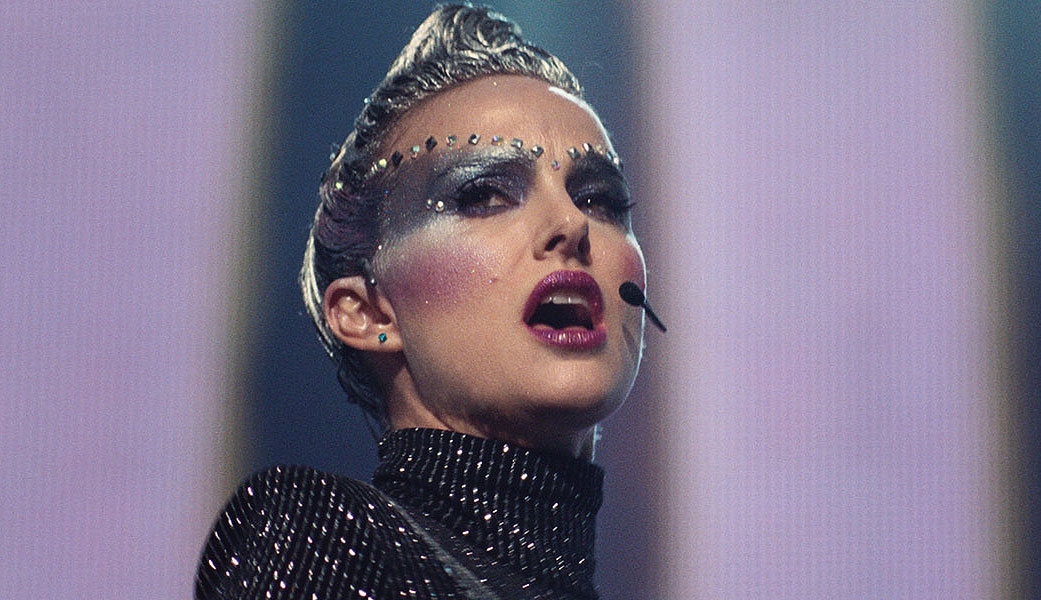 Some movies are designed to shock the system. “Vox Lux,” the new film from actor turned writer/director Brady Corbet, has just such plans and doesn’t hide it. Opening with a short narration rather inexplicably by Willem Dafoe, the film immediately throws its audience into a violent and harrowing school shooting. Nearly full credits run over footage of young Celeste Montgomery (Raffy Cassidy) as she clings to life in the back of an ambulance. Crippled by a spinal cord injury and struggling with her rehab, Celeste finds an outlet in music, writing and singing songs with her sister Eleanor (Stacy Martin) to perform at a memorial service. The performance goes viral and garners Celeste national attention, and she signs a contract to be a pop star under the tutelage of her new manager (Jude Law), despite only being 14 years old.

Violence tends to lead to violence, and 17 years later, Celeste (Natalie Portman) is informed of a terrorist attack that was carried out using masks modeled after her first music video just a few hours before beginning an ambitious stadium tour in her hometown of New Brighton, the site of the shooting that changed her life. Despite her success, the years have been less than kind to Celeste, including having a child (again played by Cassidy) in her teenage years and struggling to be a good parent and role model. She’s grown into a defiant woman, but she’s lived lifetimes in her 31 years and can only barely keep the ship afloat.

Best described as a brazenly and self-consciously artistic look at fame, innocence and innocence lost, Corbet fills the screen with all sorts of challenging visual and auditory techniques. It’s shot in the rarely used 1.66:1 aspect ratio, something not quite square but not exactly rectangular either; its credits run backwards, retreating from the bottom of the screen to the top; it relies on strobe lighting and disorienting editing; and it has title cards for each of its acts. Essentially, “Vox Lux” has all the trappings of the sort of movie that would be dismissed as pretentious or suffocatingly self-serious. It has the words “ART HOUSE” tattooed across its ostentatious face.

Comparisons to the higher profile “A Star is Born” are inevitable; you don’t get two movies about a rising pop star in the same year and expect them to live separate lives. But where Bradley Cooper reached for classical melodrama, Corbet sets up a funhouse mirror and watches as the industry twists Celeste into a grotesque reflection of her former self. Lady Gaga gets the plaudits because she still gets to be what we all hope being a pop star would be like. Portman’s job is so much more difficult, actively working both with and against what Cassidy does in the first half of the film and internalizing the nearly two decades of experiences we don’t see. And with Cassidy still there as her daughter, the contrast remains stark. Portman’s performance is ugly and jagged and confrontational. Her accent grates. Her voice is weak and reedy. She stumbles through scenes, barely keeping herself vertical, but not in that romantic way we’re used to seeing fading stars in movies like this. There’s no romance to be found in “Vox Lux,” only the harsh light of day.

“Vox Lux” seems to revel in its strange energy. Dafoe’s monologues are written with the sort of self-serious flourish you would expect to find in endless student films. The final performance (featuring songs written for the film by Sia) strives for some kind of catharsis that never materializes, but there’s a very good chance that is absolutely the point. So much of the film builds it up — the year spent planning everything out meticulously, the pressure on Celeste to somehow lift the pall over this town that has subsumed its trauma and her trauma. But any sense of artistry and sincerity has eroded away over the years. It’s all motions, no emotion.

Corbet has put together the sort of experience that defies classical interpretations and has no interest inhabiting a preconceived box. It’s the sort of movie, like “mother!” or “The Neon Demon” or “Suspiria” before it, that is guaranteed to repel just as many (if not more) as it draws in. It uses its art as a weapon. As a tale of two stories, its second half is a tougher watch than its first, but that is absolutely by design, painting a portrait of a barely functioning woman forced to relive her past traumas in the most direct of ways as a metaphor writ large for an America losing the last shreds of its innocence with every shattering act of violence. It’s a hard pill to swallow, made harder by Corbet’s uncompromising take, but the rewards are there, making “Vox Lux” a scintillating and confounding piece of artistic fury.