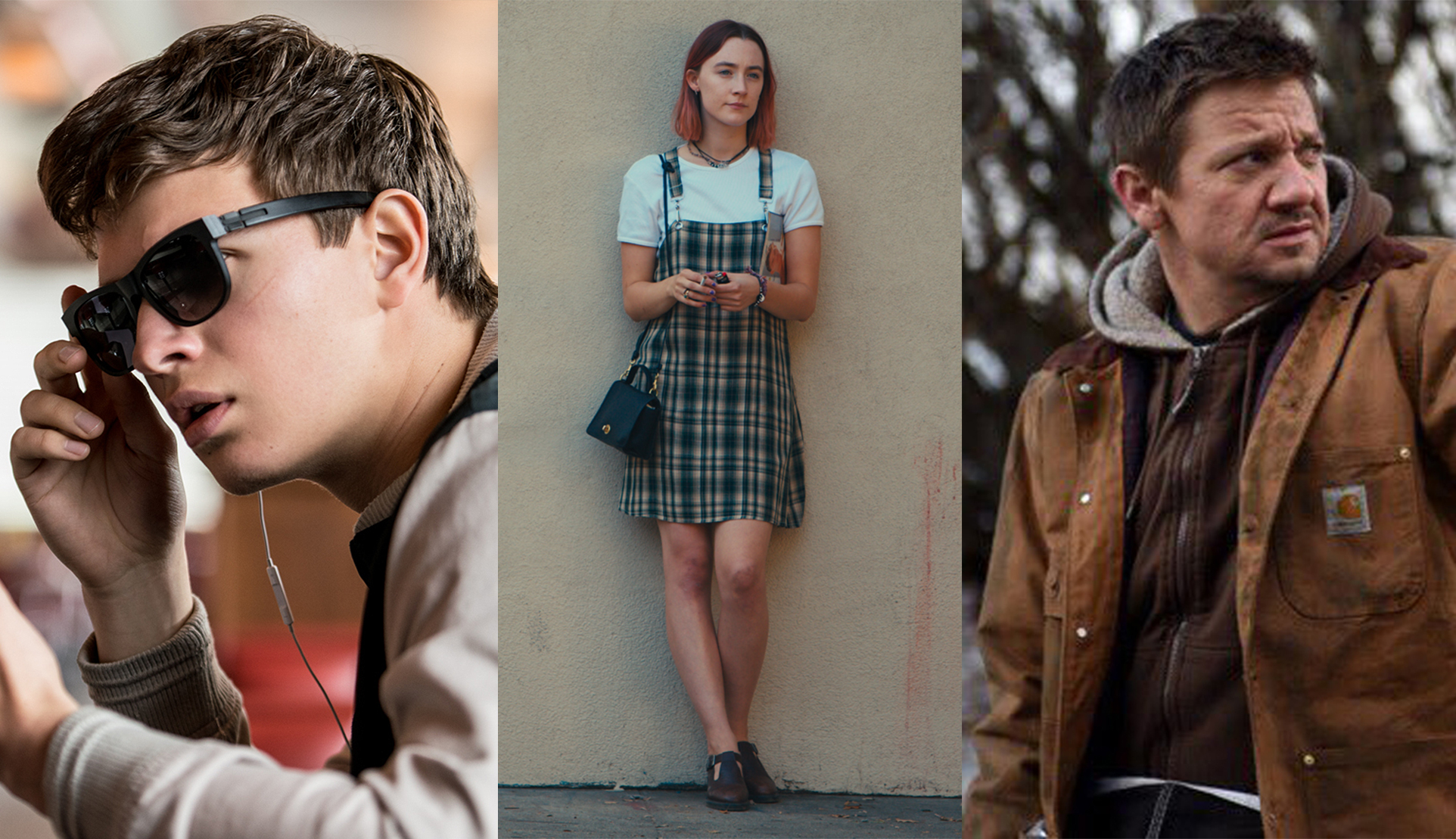 Anyone paying attention to the 2017 news cycle has plenty to be depressed about this year, but thankfully, there have been a lot of great movies to help distract from what’s happening in our nation’s capital, some of which even serve as much-needed commentary on the current political climate. As usual, my annual year-end list features a mix of recognized best-of candidates and a few outliers that hopefully express my unique taste in films, at least compared to my fellow critics. If you don’t see your favorite movie in my top 10 or the Honorable Mentions section below, chances are there either wasn’t enough time to watch it or it simply wasn’t my cup of tea.

Jordan Peele’s directorial debut may not be what fans were expecting from a comedian best known for his sketch comedy work, but it’s a clever and confident genre mashup that expertly blends suspense and humor with some biting (and incredibly timely) social commentary on race relations in America. Heavily influenced by sci-fi horror films like “The Stepford Wives” and “Invasion of the Body Snatchers,” “Get Out” keeps you on the edge of your seat throughout its intense, tightly paced runtime, utilizing extreme close-ups and Michael Abels’ eerie musical score to build tension and create an unsettling atmosphere of paranoia that effectively puts you in the protagonist’s shoes. Though Daniel Kaluuya and the rest of the cast all deliver fantastic work in their respective roles, the movie’s true star is Peele himself, whose singular vision makes “Get Out” one film that you won’t soon forget.

A film about the making of one of the worst movies of all time might not sound that compelling (after all, Tommy Wiseau’s “The Room” is bad for a reason), but director James Franco delivers a tragicomic look not only at the production of the film but the complicated friendship between its two stars. Based on Greg Sestero’s book of the same name, “The Disaster Artist” manages to spin an endearing tale about passion, dedication and chasing your dreams, even when the whole world seems against you. There are a number of fun performances in the film, but the movie belongs to Franco, whose hilarious yet heartbreaking turn as Wiseau is one of the year’s best; it openly indulges in Wiseau’s eccentric nature without ever feeling like parody. That’s a lot harder to pull off than it seems, and it’s ultimately what allows “The Disaster Artist” to walk such a fine line between comedy and drama.

“The Last Jedi” is the first “Star Wars” film that doesn’t entirely feel like a “Star Wars” movie. Though it has all the usual trappings of the franchise, writer/director Rian Johnson raises the bar with some gorgeous cinematography and a more character-driven narrative that leads to some fantastic work from Mark Hamill and Adam Driver, whose Kylo Ren is arguably the most interesting villain in the “Star Wars” universe. He may not be as dangerous as Darth Vader or as cool as Darth Maul, but he’s certainly the most complex, and “The Last Jedi” builds on his internal struggle in exciting new ways. Not every one of Johnson’s narrative choices pans out, but the stratospheric highs — including one of the best lightsaber battles in the history of the series — easily outnumber its disappointing lows, resulting in yet another great addition to the “Star Wars” saga that will likely get better with age.

For a movie about the dead (more specifically, the Mexican holiday Dia de los Muertos), “Coco” is bursting with colorful, vibrant life. Pixar’s latest film is a visually dazzling and incredibly heartfelt coming-of-age story about family, tradition and mortality — particularly what happens after you die — that is fueled by a genuine respect for Mexican culture. The Land of the Dead is one of the most magical worlds that Pixar has ever created; it’s wildly imaginative and impeccably designed down to every nook and cranny. Though the movie glides by on its simple charms for most of its runtime, the third act is what transforms “Coco” from a pretty good film to a great one with a powerfully emotional ending that’s completely earned. Pixar may have lost some of its glamour in recent years, but “Coco” proves why they’re still the king of animation.

Martin McDonagh’s latest film is exceptionally dark, but it’s one that shines nevertheless thanks to some sharp humor and several great performances from its talented ensemble cast. Chief among them is Frances McDormand as the crass, take-no-shit mama bear who embarks on a righteous quest for justice, or at the very least, the chance to stir up trouble and keep her mind off the tragedy that has shaken her household. It’s some of the finest work of her career, and the same goes for Sam Rockwell, whose delinquent cop gets a nice redemption arc despite the fact that it comes a little too easy. Though the movie’s ending won’t sit well with anyone expecting the story to be wrapped up nicely with a bow, there’s something so authentic and deeply human about the way McDonagh writes these characters — flawed and messy and not always deserving of our sympathy — that it’s actually quite fitting.

This somewhat unconventional underdog story about scrappy U.S. figure skater Tonya Harding offers a darkly humorous look at her rise from white-trash nobody to Olympic athlete and the stranger-than-fiction incident that ended her career. Playing with the concept of the unreliable narrator by using contradictory interviews with Harding and then-husband Jeff Gillooly, it’s never really certain who’s lying at which point in the story, but it feels like director Craig Gillespie arrives at something close to the truth by the end. What’s perhaps most surprising about the film, however, is the way that it manages to turn Tonya into a sympathetic character after years of being vilified by the media. Part of that is down to the brilliant performances of Margot Robbie (as the titular skater) and Allison Janney (as her monstrous stage mom), but it’s also because Gillespie is more interested in providing some context as to why Tonya may have been involved than whether or not she actually did it.

Greta Gerwig’s directorial debut is a low-key but incredibly affecting coming-of-age drama that is about a very particular time and place and yet is universally relatable to anyone who’s ever struggled to find their own voice, defied their parents or dreamed of leaving their hometown for something better. Though it features all the same beats that you normally find in the subgenre, the film is elevated by some smart writing and stellar performances by Laurie Metcalf and Saoirse Ronan. The two actresses are so good as the mother/daughter duo, bickering over the color of a dress one second and then bonding over that same dress the next, that the relationship feels completely authentic, which is paramount to the movie’s success. It’s perhaps a little too on-the-nose at times, but “Lady Bird” is a funny, sweet and unflinchingly honest portrait of growing up that signals Gerwig as a filmmaker to watch.

Aaron Sorkin is among the most revered screenwriters of the past 20 years, so anytime a new Sorkin-penned film comes along is cause for celebration, and his directorial debut is no different. Though the movie lacks the discipline that a more experienced director would have brought to the project, “Molly’s Game” succeeds nonetheless thanks to a hugely entertaining script and superb performances from its two stars. Jessica Chastain is especially good as poker princess Molly Bloom, solidifying her status as one of the best actors in the business, while Idris Elba handles Sorkin’s zippy dialogue like a pro. Michael Cera is also great as a smarmy movie star who may or may not be based on Tobey Maguire. “Molly’s Game” isn’t Sorkin’s finest work, but even lesser Sorkin is better than most films, and this one is a top-shelf drama that’s as smart, funny and engaging as just about anything on his resume.

Blending stylistic elements of “Heat,” “Drive” and “La La Land” into a cinematic milkshake that goes down smooth, “Baby Driver” is Edgar Wright’s most ambitious film yet — a music-driven, adrenaline-pumping ballet of sight and sound that needs to be seen on the biggest screen possible. In addition to an excellent soundtrack, the movie boasts great performances from Jon Hamm and Jamie Foxx as well as some of the most exhilarating car chases in recent memory. The opening sequence, in particular, is so good that it will have you grinning like a kid in a candy shop. Wright’s films have never been short on style, but it’s usually there for a purpose, enriching each scene in some way. Although there’s definitely more style to “Baby Driver” than substance, the movie rises above its shortcomings to deliver a truly unique moviegoing experience that proves yet again why Wright is one of the best filmmakers working today.

Taylor Sheridan is one of the best storytellers working today, so it was only a matter of time before the Oscar-nominated screenwriter behind “Sicario” and “Hell or High Water” would try his hand at directing. Though “Wind River” is technically Sheridan’s second feature (following his little-seen 2011 debut, “Vile”), it’s no less impressive. Boasting great performances from Jeremy Renner, Elizabeth Olsen and Gil Birmingham, “Wind River” is a compelling murder mystery filled with naturalistic dialogue, beautiful scenery and well-rounded characters. It’s also an expertly-paced slow burn that ratchets up the tension in the final 20 minutes with a sequence that rivals the border crossing scene in “Sicario,” all while handling its distressing plotline with the cultural sensitivity and emotion that it deserves. That’s not to say that “Wind River” is totally flawless, but like Sheridan’s last two movies, it comes pretty darn close.