This beautiful redhead has become one of the most sought-after actresses in Hollywood. Jessica Chastain’s career took off in 2011 when she starred in “Tree of Life” and “Take Shelter” and made the trip to Cannes that changed her life. Her quote in an interview with The Hollywood Reporter says it all:

I knew at that moment it was life-changing. Because I was there with “Tree of Life” and with the film “Take Shelter.” Walking down that red carpet with Sean Penn holding one hand and Brad Pitt holding the other, and everyone’s like, “Who is this girl in the yellow dress? Who is this person?” I knew that that red carpet, after having that premiere, it would just be a turning point in my life.

She’s now a force in Hollywood, as an amazingly talented actress with the stunning beauty of a fiery redhead. We can’t take our eyes off of her. She’s also very clear about what she wants and the importance of female roles, as you can see from the quotes below.

Jessica was born in 1977, and she didn’t become a big name in Hollywood until well into her thirties. That may be a good thing, as she wasn’t pigeon-holed into the young hottie roles many actresses get in their 20s.

Jessica is one of the busiest actresses in Hollywood, and you can follow our latest Jessica Chastain content along with our archived Jessica posts on our blog.

Jessica jumps off the screen in practically every role she plays. She has the rare combination of beauty, talent and charisma, and she’ll be sought after by directors and producers for years to come. We’ve included some of her performances over the years:

“The Help” (2011)
Our movie critic Jason Zingale put it best when he wrote that “Jessica Chastain nearly steals the whole movie as a ditzy trophy wife who’s banished from the social clubs simply because Hilly doesn’t like her.” That’s quite a feat given all of the memorable performances in that classic film. After this performance, everyone knew that Jessica was headed for stardom.

Zero Dark Thirty (2012)
Jessica stars as Maya in this film about the hunt for 9/11 mastermind and financier Osama bin Laden.

“Interstellar” (2014)
Jessica had a supporting role in this Christopher Nolan film alongside a stellar cast including Matthew McConaughey, Anne Hathaway, Casey Affleck, David Gyasi, Wes Bentley, Michael Caine and John Lithgow. This was another cast worthy of her talents. 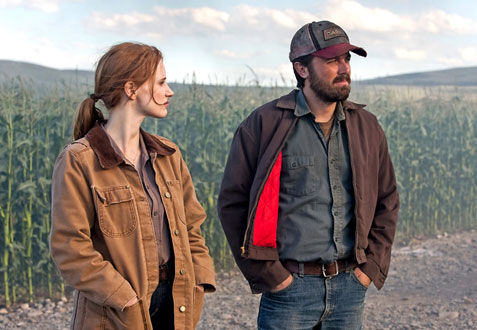 “A Most Violent Year” (2014)
Jessica turns in another excellent performance in this J.C. Chandor film. Jason Zingale notes that “Jessica Chastain doesn’t get nearly as much screen time, but she creates a fierce counterpart to Abel – equal parts Elvira Hancock and Lady Macbeth – that suggests she’s not to be messed with.” 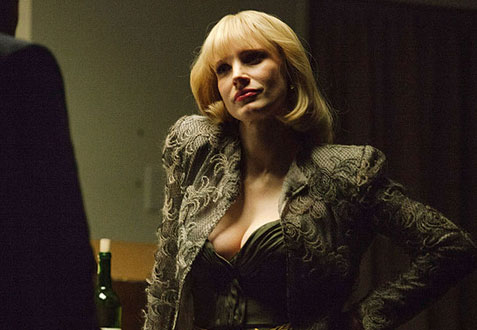 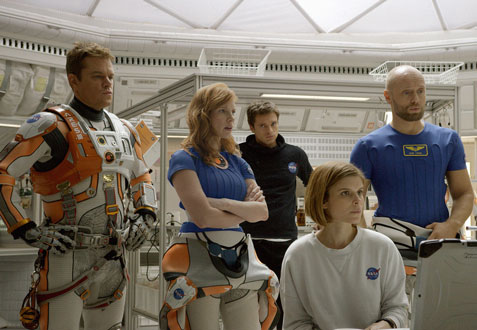 “Crimson Peak” 2015
The memorable performances keep coming as Jessica takes advantage of every opportunity to shine. Jason Zingale notes that Jessica is the real standout in this film. “The actress digs into her juicy role with a quiet intensity, delivering a masterfully restrained performance that could have easily devolved into camp. Instead, Chastain takes the less obvious route, and it’s bone-chillingly effective, like in a scene where she scrapes a spoon across a bowl of porridge while detailing her father’s abusive tendencies that’s more disturbing than any other moment in the film.” 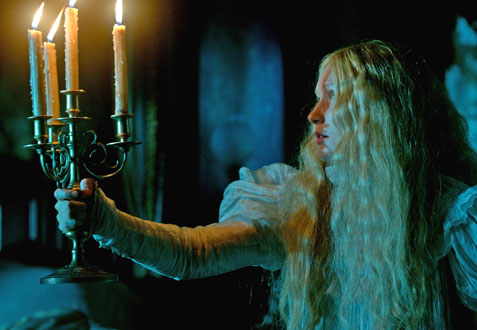 “The Huntsman: Winter’s War” (2016)
This film offered Jessica the opportunity to play a badass character, and Jason Zingale notes that she “clearly relishes” the opportunity. While she struggles with her Scottish accent in this film that mostly wastes top talent, this role must have struck a chord with casting directors who would later give her more badass characters to play.

“Molly’s Game” (2017)
Jessica gets the lead role in one of our best films of 2017 and nails it. She’s a leading lady and can carry film. Jason Zingale notes that “Jessica Chastain is especially good as poker princess Molly Bloom, solidifying her status as one of the best actors in the business.” This role stands out as one of her best, and she looks amazing in every scene, even when she’s down and out. The endless cleavage shots help of course! Check out this film if you haven’t seen it and you’ll also learn about the world of high-stakes private poker games. 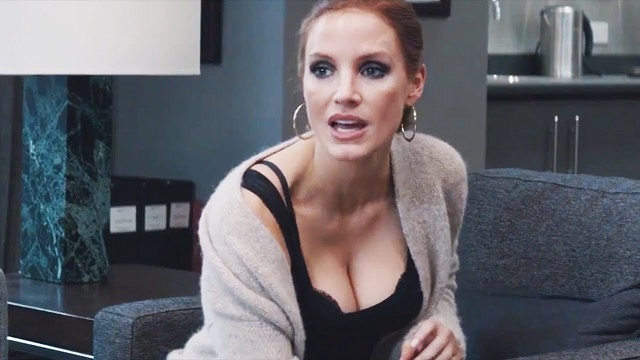 “X-Men: Dark Phoenix” (2019)
This isn’t a great film, and Jessica doesn’t have a huge role, but we can’t blame the Marvel team for wanting to get Jessica into their camp. She plays a character named Vuk who leads a mysterious race of aliens. Movie critic Rob Dean notes that Jessica and the other actors “all seem very committed to their morally ambiguous characters and are equal parts sympathetic and menacing,” even if the movie doesn’t live up to the hype. 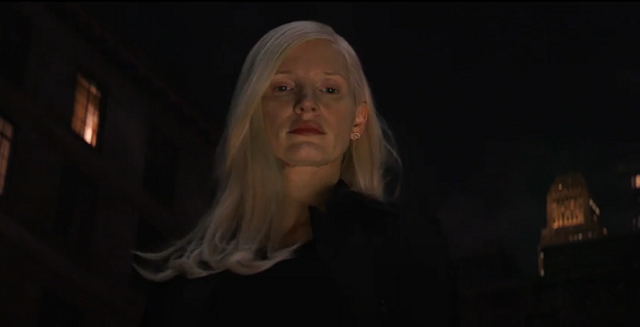 “It: Chapter Two” (2019)
Jessica stars in an ensemble cast in this solid thriller.

Ava (2020)
This is probably our favorite badass character in Jessica’s resume. Ava is a deadly assassin who works for a black ops organization, traveling the globe specializing in high profile hits. Things spin out of control when a job goes bad. Jessica establishes herself as an action star with this performance.

“The Eyes of Tammy Faye” (2021)
Jessica wanted to play this character for years, and she nails it in the leading role:

Chastain is mostly great as Tammy Faye, with a portrayal that is at its most cartoonish before all of the fame and layers of make-up. When Tammy Faye is still in bible college and then on the road with Jim, a lot of her personality is conveyed through vocal tics and exaggerated behavior. It’s not until the Bakkers start gaining prominence with Robertson and PTL that the performance becomes more layered and varied. This suggests that the “true” Tammy Faye was the one under the spotlights and living in decadence, performing song-and-dance routines while possibly fleecing the underprivileged. Before all that, she was simply trying to play a part in life. It’s either a bit of bad editing, shrewd directing or masterful acting (or maybe a combination of all three), but it makes for a much more engaging character study that allows Chastain to reveal hidden depths of pain and humor in the most surreal circumstances. 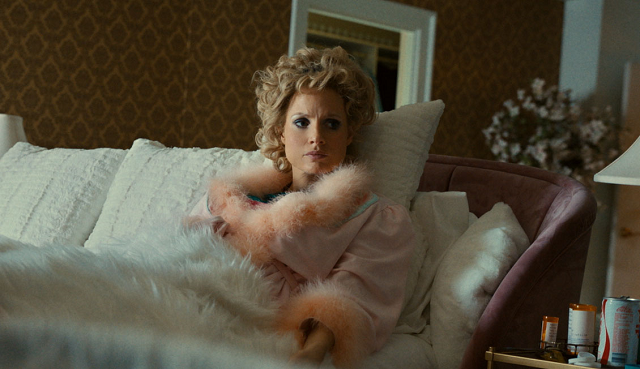 “The 355” (2022)
Jessica gets a badass role as a CIA operative, but sadly the script and poor directing sink this film. 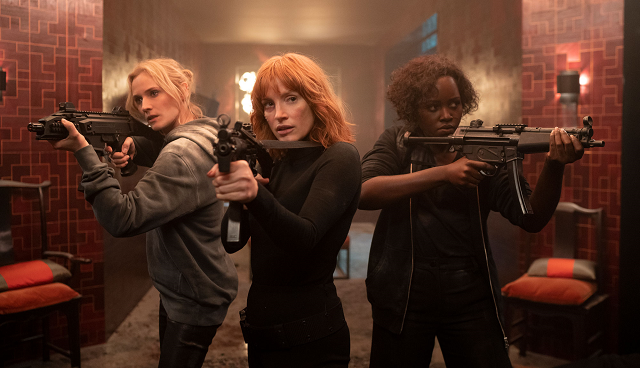 We admire Jessica’s honesty and her commitment to her craft and larger social issues. She doesn’t pull any punches in this Vanity Fair interview, as you can see from some of her quotes:

“I get this a lot—when people say that the characters I play aren’t feminine. And it makes me so mad. So, masculine, to you, means a character who is interested in their career and is not interested in a love life?”

“Everything I do, I’m like, How am I pushing a conversation forward?”

“I look at filmmaking as a political act…in terms of how am I creating a conversation about gender and about women. I know what it is to grow up as a woman and to live in this world as a woman and what the media says.… And if we keep feeding little girls this fairy tale of happily ever after, and someday your prince is going to come and save you from the world and take care of you for the rest of your life, that’s a load of bull. The reality is, yes, someday you could meet someone wonderful, but be your own prince. Go save yourself.”