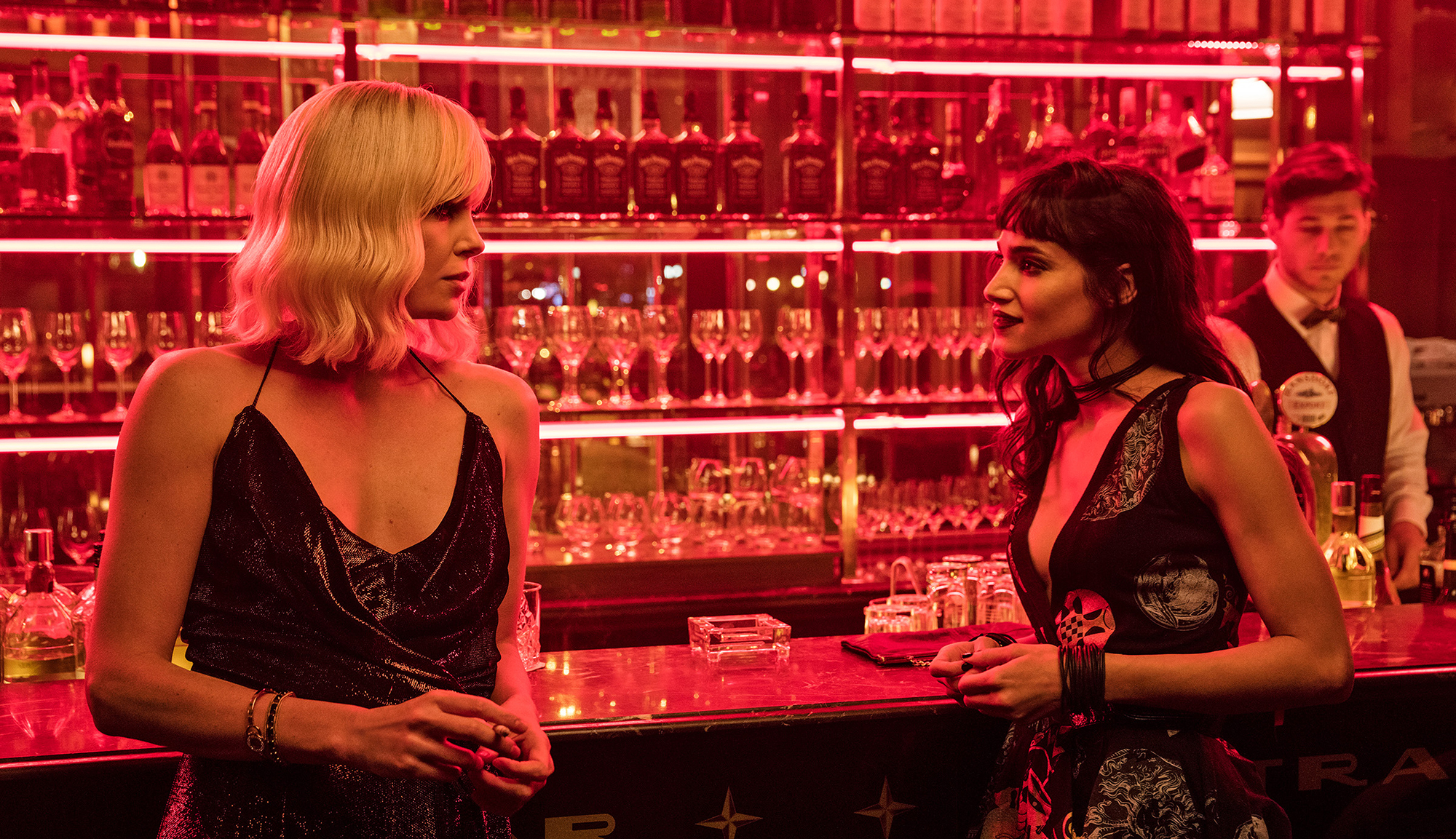 If style was all that a film needed to succeed, “Atomic Blonde” would be one of the best movies of the year. Production design, lighting and cinematography are all on point to deliver some of the best looking moments in recent memory. Unfortunately, the film’s insistent, convoluted plot constantly gets in the way of its aesthetically pleasing scenes and excellent action sequences so that it becomes a bit of a chore to get through. What should’ve been a straightforward spy thriller with badass set pieces instead becomes a slog towards a conclusion that is pretty obvious no matter how much the script attempts to throw up smoke screens.

Based on the graphic novel “The Coldest City” by Antony Johnston and Sam Hart, “Atomic Blonde” is set in East and West Berlin during the waning days of the Cold War. MI6 agent Lorraine Broughton (Charlize Theron) is dispatched to stop a list of secret agents’ identities from falling into the wrong hands. While navigating the geographically divided space, she must also contend with a coterie of foreign agents and various thugs who are all intent on finding and exploiting the list. Enlisting (or exploiting) the help of fellow British agent David Percival (James McAvoy) and seducing the secretive Delphine (Sofia Boutella), Broughton hopes to find the list, expose the various double agents at work, and escape with her life back to Western civilization.

Director David Leitch (“John Wick,” “Deadpool 2) delivers a beautiful movie with impressive stunts that unfortunately makes far too many missteps in its narrative to be recommended without an asterisk. Theron, McAvoy, Boutella and John Goodman all turn in fun performances, but they’re forced to do so much heavy narrative lifting that not even dazzling sequences like a hotel room shootout register with viewers as exciting. Despite a wobbly British accent, Theron does a great job as the badass spy navigating shark-infested waters of a civilization on the brink of war. In the grand tradition of cinema’s best secret agents, she exudes strength, grit and cool even at her most vulnerable moments. McAvoy also has a ball as Percival, a rebellious spy who seems most at home amidst the chaos of the Cold War tension along the Berlin Wall.

There are plenty of great fight scenes, culminating in an astounding skirmish through a derelict building shot to appear as one long take that is truly impressive and could make a lot of highlight reels for years to come. Add to that a steamy set of scenes showing the raw sexuality and power plays between Broughton and Delphine (which seems less salacious and more like a needed element to add to the former’s enigmatic character), and put it all under brilliant neon lights and set to a bumping ’80s soundtrack, and the ingredients were certainly present for this to be an instant espionage classic.

But the film is consistently undercut by its flub of a script (written by Kurt Johnstad) that begins its laundry list of sins with an unnecessary framing device that (inadvertently, but directly) sucks a lot of tension out of the story. Furthermore, the audience is always a couple steps ahead of the movie — never a good position for a plot to be in — no matter how many twists the screenplay offers up to try to distract from its rather pedestrian tale. In a stylish action film, plot doesn’t necessarily matter; “John Wick” has easily one of the dumbest and most rudimentary storylines, but skates by with ease on its style and propulsive action. However, “Atomic Blonde” is a slave to its plot machinations, so Broughton has to meet Person A to get Object X before bringing Object X to Person B, where she learns about Object Y, which actually belongs to Person A… and so on. It’s also worth mentioning how clichéd the “list of secret agents falls into the wrong hands” MacGuffin has become in the spy thriller. A large amount of emphasis is placed on the so-called subtlety of the turns that the plot takes, so it’s hard to ignore and just get caught up in how cool everything looks.

For a movie about espionage, “Atomic Blonde” mistakes secret intelligence for actual intelligence and works very hard to undercut all of the great work on screen. Forgettable dialogue and unnecessary plot mechanics are constantly sabotaging a perfectly fine delivery system of impressive action shot in a very cool manner. Theron’s character is an intriguing one, and it’s a real treat to see how fierce she becomes when faced with adversity. It’s just a shame that so much effort goes into trying to make a tale of double and triple agents even more complex rather than relying on a simple story executed with panache. “Atomic Blonde” will be a movie that plays great in clips or heard playing in the background at a party. It has a lot of interesting parts at which audiences can marvel, but paying close attention breeds contempt.