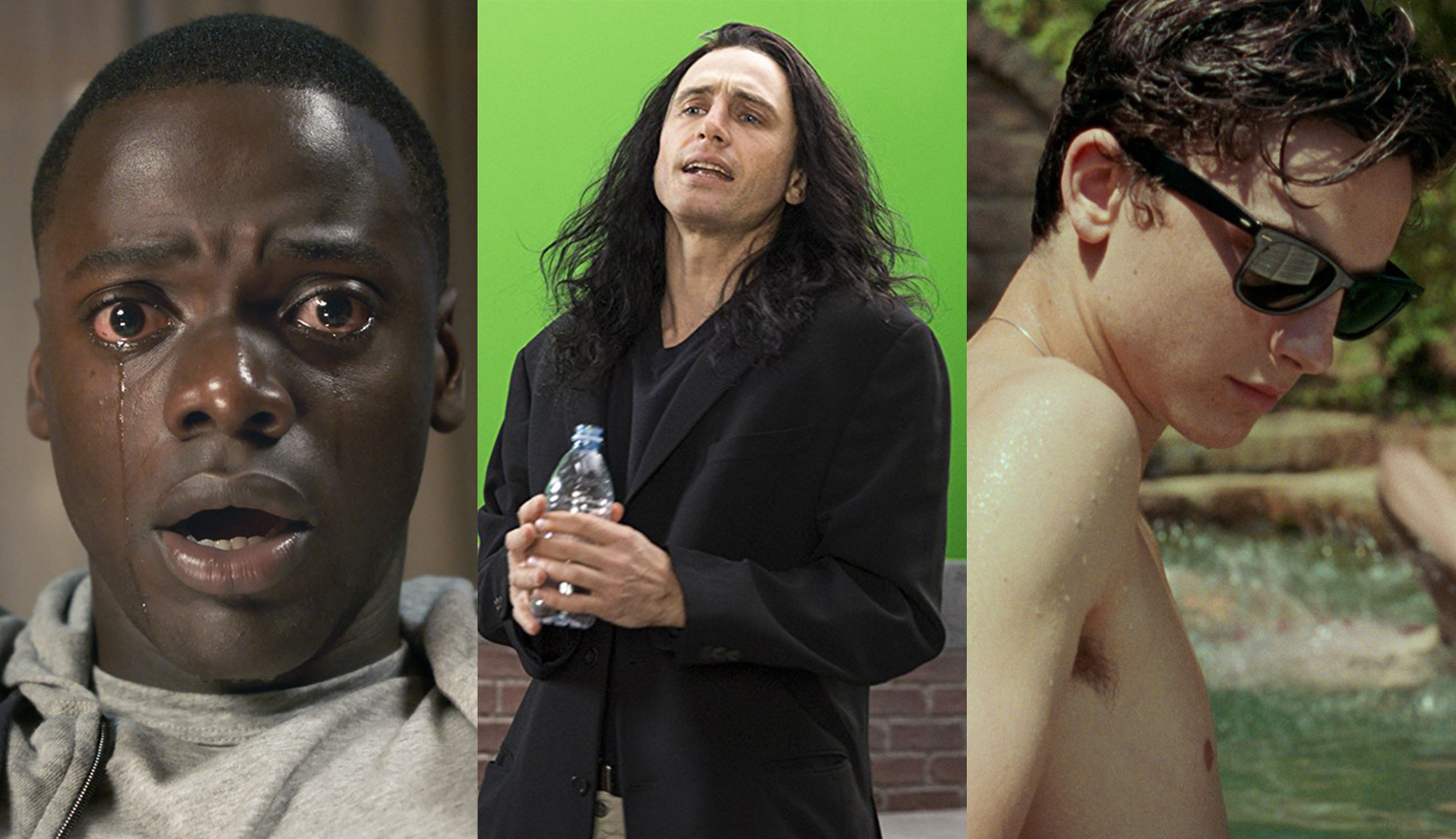 While 2017 was something of a garbage fire on the national and international levels, there was a lot to praise in cinemas this year. Pretty much every genre had at least one great movie that showed off the best of that category. Musicals excelled with “The Lure;” superheroes shined in “Wonder Woman” and “Guardians of the Galaxy Volume 2;” romantic comedies were never better than “The Big Sick;” and horror was at its peak with “It” and “Tragedy Girls.” It was a year of very good movies for independent films and big studio titles alike, with a new piece of cinematic gold to discover and treasure almost every week. However, there are only so many to choose from, so here are my top ten films of 2017.

It’s rare for action sequels to meet their predecessors in quality, let alone surpass them with insane set pieces and gorgeous cinematography. And yet that’s what happened with this universe-expanding entry that took a closer look at the bizarre world of international assassins and the folks who work with them. “John Wick: Chapter 2” is a rollicking action thriller that travels through the murky tunnels of this mythological otherworld in spectacularly beautiful fashion, becoming a mesmerizing journey that is utterly enthralling and totally unique.

Christopher Nolan’s labyrinthine ode to the power of survival is an intricate clockwork of multilayered narratives and time shifting that makes every moment either a tense climax or a powerful meditation on the ravages of war. Showcasing the alternating desperation and heroism of people in an untenable situation, “Dunkirk” immerses audiences into a hopeless setting where any decision can mean the difference between life and death. It’s powerful filmmaking with some of the best editing and images captured in film. Nolan’s ingenuity in the script and brilliant compositions with the camera propel this movie into becoming a classic that will be revisited by film students and cinephiles for decades to come.

Darren Aronofsky has always been a bold visionary in his filmmaking, daring to audaciously examine giant topics while also delivering scintillating plots, powerful characters and bold imagery. “Mother!” is the apotheosis of Aronofsky’s work; it’s the culmination of years of pondering questions of spiritual, environmental and biological natures that all come together in this allegorical film. At once about universal issues and deeply personal viewpoints, the film is a hard-hitting look at Judeo-Christian roots while also contemplating how that relates to interpersonal relationships with artists. It has some arresting moments that people are still ruminating over many months after its release, especially in its anarchic third act when everything goes off the rails. Aronofsky swings for the fences with this one and connects with an incredibly stirring movie that will unsettle as much as it provokes further questions (and additional viewings).

After years of collaborating with Noah Baumbach, Greta Gerwig stepped out on her own as writer/director of this excellent coming-of-age story that is able to capitalize on both the specificity of a time and place and also the universality of the growing pains felt between a mother and daughter. Saoirse Ronan gives a career-defining performance (in a filmography littered with them) as the titular character who tries to navigate the minefield of defining one’s own identity in high school. The hilarious moments are offset by the quietly devastating ones, which coalesces into a totally human portrait of a person in flux, unsure of what’s next or what any of it all means. It’s instantly relatable, no matter the viewer, because so many elements are experiences that everyone has as they grow up and attempt to find their voice. Gerwig has found her voice with “Lady Bird” and crafted a touchstone film that resonates through multiple generations.

In a year of politically-charged acts of art and defiant stances against the status quo, who would have guessed it would be the film about a lady that wants to shag a fishman that struck the most triumphant tone of the resistance facing down the powers that be? Guillermo del Toro’s “The Shape of Water” is a sumptuous and sensuous modern fairy tale about the freaks inheriting the earth. Those deemed as outsiders find strength in each other through the purity of their love for one another. Sally Hawkins, Richard Jenkins and Octavia Spencer don’t stoop to the level of the monstrous vanguard that Michael Shannon represents but instead dare to imagine a better future free from the judgments of small-minded creatures. It’s a beautiful tale that inspires as much as it entertains, basking in the light of the shadows where the “monsters” dwell and finding a safe space for all who seek it.

Writer/director David Lowery has made a truly ingenious movie about the passage of time, the power of love and the permanence of all things thought ephemeral. “A Ghost Story” is a stirring film that leads viewers to reflect on their own past loves, what they have left behind as they march forward into the future, and what will be left of them long after they are gone. With the silliest of conceits and goofiest of imagery, Lowery is able to deliver a touching look at legacy and love, examining all the facets of the human experience throughout his white-sheeted ghost who never utters a noise. Joy, loss, love, loneliness, humor, sadness and anger — all of it is present in this epic film that traverses time and (some) space while existing within the claustrophobic frame setting. It’s the type of film that leads audience members to pore over their memories, seek out those they are closest to and hold people just a little bit tighter for a little bit longer.

James Franco shows an uncanny understanding of a much-maligned artist in the winning “The Disaster Artist.” Based on the book by Greg Sestero and Tom Bissell (with a screenplay by Scott Neustadter and Michael H. Weber), the movie is a tremendous ode to friendship and art affecting people, no matter the intention behind it. Director Franco, who also plays auteur Tommy Wiseau, shows a light touch in creating a world where viewers feel sympathy for this self-obsessed, callous, secretive man. His ambition far exceeded his talent, but in pursuing his dream, he was able to deliver joy to millions around the world. Wiseau is pure in his vision, which is ultimately to his detriment, but he is still able to get the connection and approval he desperately seeks from people worldwide by committing to seeing his story through. It’s a hilarious movie that could easily devolve into caricature and lazy references but transcends that to become an uplifting journey of redemption and friendship in the face of a cold world.

In a supposedly post-racial world, with Nazis brazenly walking down streets holding their tiki torches aloft, Jordan Peele’s “Get Out” is the perfect commentary on the insidious nature of appropriation, the widespread effects of systemic racism and the chilling true face of racial manipulation. The film is hilarious in parts, creepy in others, but it always retains a bold honesty about situations that made it immediately connect with audiences in a way few other films have in recent years. Peele has created a deeply layered story and clever take on the “Stepford Wives” trope that is much more complicated in its observations than simply black or white. In a year where audiences lost brave horror auteur (and outspoken social critic) George Romero, it’s comforting that a talent has arrived to pick up the baton and carry it forward with a fresh vision that rewards viewers with an honest take on topics that is rarely heard in mainstream filmmaking.

When the trailer first hit, I thought I would enjoy Dave McCary’s weird lo-fi ode to fandom, but I never thought I would completely fall in love with “Brigsby Bear” and its powerful message of how art helps us communicate with the world. Based on a script by Kevin Costello and Kyle Mooney, this indie film is a remarkable piece about lovable losers who find a way to connect with each other through their shared passions; the awkward become infectious in their devotion to something they thought they alone loved. The movie is charming and clever, with twists and turns that are hard to see coming but nevertheless effective. As opposed to other films about outsiders, the filmmakers never look down on their subjects but instead revel in their uniqueness and make their singular approaches to the world something that will inspire all audiences to create art of their own. It’s hilarious and quotable, touching and honest, creative and wondrous, and it does it all without seeming contrived or clichéd. Much like the film within the film, “Brigsby Bear” is the sleeper that people will be discovering randomly for a long time and will likely form its own cult of appreciation.

Once again in this list, a filmmaker has managed to create a very specific story tied to a specific time and place with unique characters that frees it up to dwell in the universal themes of love, identity and loss. Infatuation is such a compelling force that it makes people question everything about themselves; suddenly, the formation of identity becomes dependent on that other person. Luca Guadagnino’s “Call Me by Your Name” is a testament to that bittersweet feeling of first-time love — how it shapes our identities, how it stings unlike anything we’ve felt before, and how we get lost in its undertow and drunk off its charms. Timothée Chalamet, Armie Hammer and (especially) Michael Stuhlbarg all deliver incredibly written performances that are lived-in, real and relatable. What could have been a salacious story of lust, or what could have simply ridden the coattails of other queer coming-of-age films, transforms into a strongly evocative movie that reaches inside you and touches all those memories of falling in love and growing up. In a world that so often seeks to stamp out that which is beautiful and unique, “Call Me by Your Name” offers gorgeous testimony as to why it all must be preserved and how powerful love can be in the formation of our worldview.