Trending
You are at:Home»Vices»Drink of the Week: The English Rose 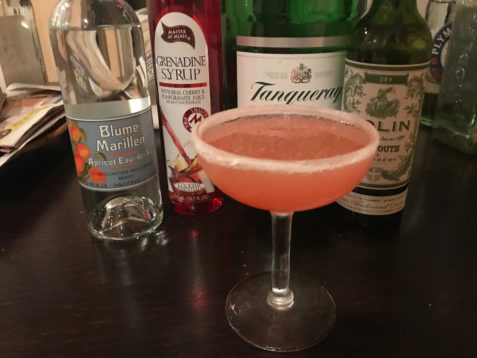 This will be the fourth and final entry in a series of related mixed drinks, all good to great, that come to us from Harry Craddock’s The Savoy Cocktail Book, the 1930 tome where so many booze classics were finally committed to print. Back in April, I brought you the Rose, a minimalist but delicious beverage comprised of kirsch, dry vermouth, and grenadine. More recently, we had the Rose Cocktail (French Style No. 1) and the Rose Cocktail (French Style No. 2). Today, we’re wrapping up with what might be least obscure of these drinks, most often called the English Rose but which barman Craddock called “the Rose Cocktail (English Style),” which lacks romance. (The Jack Rose might sound like a more masculine variation, but it’s really a completely unrelated drink.)

In terms of ingredients, the only element that unites all of these beverages is dry vermouth (called “French vermouth” back in the day), but the English Rose actually brings us full circle. That’s because kirsch (or kirschwasser) is a cherry eau de vie, an unaged clear brandy. Today’s drink either involves an apricot eau de vie brandy, or alternatively the more commonly found apricot brandy. That brandy is not really brandy at all, but a very sweet apricot liqueur made with brandy. It actually works both ways, though not equally well.

Put all of the ingredients in a cocktail shaker. Next, take a well chilled cocktail glass and use your lemon to wet the rim of the glass (water will also work). Place the top of the glass in a small bowl or plate filled with sugar. I think superfine — sometimes called baker’s sugar or castor sugar — will work out the best, but feel free to use which ever kind of sugar you’ve got handy.

Next, add lots of ice to the shaker and shake quite vigorously, Strain into your glass and contemplate, a la Mr. Shakespeare: would a Rose cocktail by any other name taste just as sweet? (Answer: it depends on your choice of ingredients.)

Now, not only is the English Rose part of a series of cocktails with differing recipes and similar names, it’s also actually two cocktails in one, depending on which brandy you select. For that I have to credit Erik Ellestad writing in his old Savoy Stomp blog. Since the recipe simply calls for apricot brandy, he reasoned that it could have meant the sweet liqueur often featured in classic cocktails, or it also could have meant the straight up brandy that is apricot eau de vie. He preferred the latter and loved the results. I kind of have to agree with Ellestad, even if I do kind of resent dropping over $35 for a half-size bottle of the stuff.

For my first attempt I stayed as close as I could manage to Ellestad’s choice of brands. My gin was Plymouth; my eau de vie was Blume Marillen; my dry vermouth was Noilly Pratt Extra Dry, the only kind now available in the U.S (Ellestad used NP Original Dry, tragically off the U.S. market). To top it all off, my grenadine was Master of Mixes, made with pomegranate and cherry juice; Ellestad makes his own grenadine, while I buy mine at BevMo for $3.99. It works fine.

The result, which definitely requires the sugar rim, is a delight for cocktail sophisticates; you can taste the hints of apricot in the eau de vie and the floral notes from your gin. It’s cold and very lightly sweet, with a very nice rosey pink hue. I also had good luck using Tanqueray and Boodles for gin, as weel as Dolin for the dry vermouth. 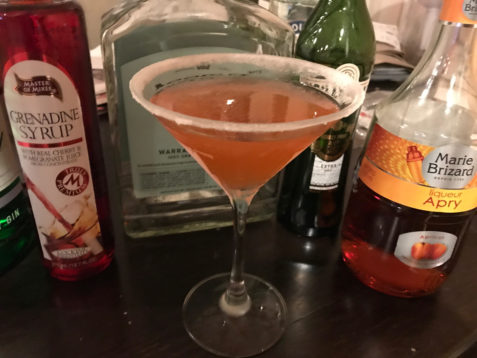 Sweet tooths and newbies, however, might well prefer the versions I made using Marie Brizard Apry for my apricot brandy, Boodles and Tanqueray, and the same brands of vermouth. Ellestad seemed to feel that using the sugar rim would be hard to justify while using the sweet liqueur. I say embrace the cloy and rim it.

Here’s the thing, though. What kind of brandy did Harry Craddock have in mind back in 1930? Because he didn’t specifically call for eau de vie, and sweet apricot liqueur is a vastly more frequent ingredient in classic cocktails, I figured it was probably what  Craddock was calling for, Ellestad’s great idea notwithstanding. However, when I actually made both drinks, I wasn’t so sure. I mean, which drink looks more like an English rose to you?