Trending
You are at:Home»Vices»Drink of the Week: The Rose Cocktail (French Style #2) 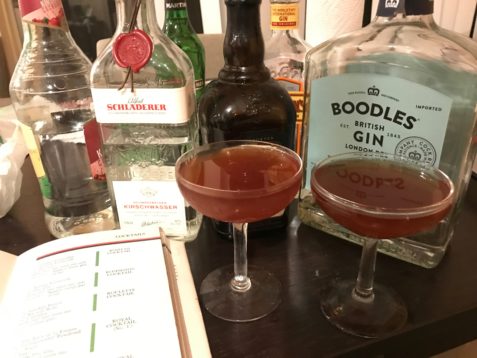 We continue our exploration of obscure drinks that sound the same but taste different with yet another recipe from 1930’s The Savoy Cocktail Book. As with last week’s selection, this one is alleged to be in some way French, even if it is most people would make this using Danish Cherry Heering, German kirschwasser, and English dry gin. Not much is known by me about this Rose-by-any-other-name but, as a fan of the unsweetened, unaged black cherry brandy called Kirsch, I was definitely more eager than usual to give this one a try.

Combine ingredients in a mixing glass or cocktail shaker with a lot of ice and stir as vigorously as you can manage. Strain into a good size cocktail glass and contemplate why we think calling something French makes it classier.

This is a drink that’s relatively sweet but which packs a martini-level alcoholic punch. Not a surprise, as two of its three ingredients are hard liquor. That’s one reason it’s important to stir this one a good long time; you need lots of icy water in there to counteract the boozy heat.

As for brands, though the original recipe calls for cherry brandy – really a sweet liqueur which, I’m guessing, is brandy based – the smart cocktail-snob money says to stick with Cherry Heering,, a straight up liqueur. It’s the default ingredient for a great many classic drinks for a reason. However, if you have some kind of artisanal sweet cherry brandy or liqueur you feel good about, there’s no reason not to give it a whirl.

I tried this Rose with two very traditional London dry gins: Boodles and Gordon’s, the slightly less dry Plymouth Gin (both a brand and a style of gin), and one genuine outlier, Scottish made Hendrick’s. The only one that was noticeably less copacetic with my taste buds was the Plymouth. The very, very slight sweet/fruity edge of that gin variation just didn’t seem to work as well with the other ingredients. Hendrick’s dry cucumber infusion wasn’t a problem, but nor was it a major plus. In any case, as both a personal favorite and relatively pricey gin, I prefer that one for G & T’s and martinis, etc.

Finally, we get to our choice of Kirsch. In this case, using an expensive product made in a fairly traditional manner with real black cherries appears to pay off. At around $50.00 a pop for a fifth, Schladerer Kirschwasser worked like a charm. Hiram Walker KIrschwasser, often less than half that price and an “imitation cherry brandy,” rendered a drink with a bitter aftertaste and, yes, my household guinea pig did bring up the dreaded cough syrup comparison. So, stick with Schladerer. This classic cocktail thing can be a rather pricey hobby.