Trending
You are at:Home»Vices»Drink of the Week: The Rose Cocktail (French Style #1) 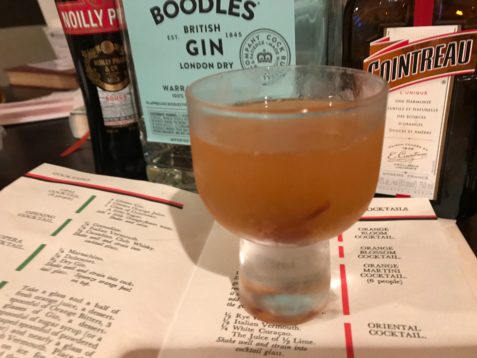 It”s Labor Day Weekend, but today we look back to April, when I gave you one version of the Rose, which I loved quite a bit. Turns out, however, that owners of Harry Craddock’s famed post-prohibitionary The Savoy Cocktail Book can find four, count ’em, four separate drinks calling themselves the Rose Cocktail — and none of them are exactly the same as mine. Don’t worry, I won’t be giving you all four, but I couldn’t resist trying a couple of them.

The first of the drinks with an allegedly French provenance lacks kirsch — a dry, unaged cherry brandy — which I found to be a key ingredient on the previous Rose. This one substitutes gin and throws in cherry brandy. Since the default cherry brandy for practically everyone, as far as I can tell, is the delicious Cherry Herring — really a very sweet, very tasty cherry liqueur using brandy as a base — I was attracted to this drink right away. Let’s give my slightly altered, boozier version a try.

The Rose Cocktail (French Style No.1)

Combine your boozes in a cocktail shaker or mixing glass with plenty of ice. Stir very vigorously for at least, say, 10 or 15 seconds — especially due to the dominance of gin in my version, I see no reason to even consider shaking this one — and strain into a well-chilled cocktail glass. T Regard the gently rose-pinkish hue and sip away.

This is a nice, simple drink for those of us who enjoy drinks that are sweet, but not too sweet. It’s not a “OMG why is this not a standard?’ masterpiece like our April Rose, but it’s very nice. Also, because of all that gin, your choice of it does make a noteworthy difference.

My preference for this one was to use a standard London-style dry gin. Boodles worked extremely well and I’m sure Beefeater, Bombay Dry, Tanqueray, Gordon’s, etc. would all be pretty delightful. On the other hand, it’s not that more off the beaten track gins aren’t any good, they’re just more tangy in a way that you might or might not appreciate. American-made Prairie Organic Gin is only a slight variation from the norm, but the result was notably even more gin forward and probably my least favorite of my attempts — but really, still pretty okay. Using Scottish made, cucumber infused Hendrick’s was the tangiest version and, really, almost as good as using Boodles but with an edge some may like more than others.

My vermouths were Dolin’s, Martini, and Noilly Pratt. All were fine but I might give a slight edge to Martini for this particular drink. It lets the Cherry Herring take the lead in a way I enjoyed.