Trending
You are at:Home»Vices»Drink of the Week: Remember the Maine 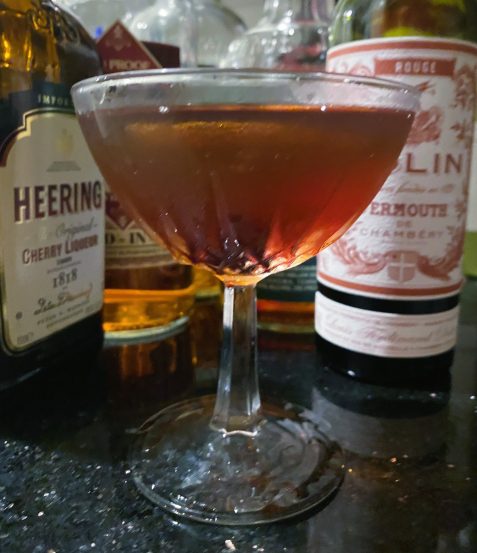 It wasn’t the last time Americans were fooled into backing a needless and immoral war but this time the outcome was seductive. The war was short, and the body count of a few hundred people was absurdly low compared to most other wars. Best of all, from an American jingoist’s point of view, the waning Spanish empire surrendered control of Cuba, Guam, the Philippines, and Puerto Rico. The US was taking its first big step to superpower status.

What was arguably good for the US was not necessarily so great for Cuba. By 1933, the island nation was in the throes of a messy revolution-cum-military coup led by brutal-autocrat-to-be Fulgencio Batista that came to be called “The Revolt of the Sergeants.” Since famed globetrotting food and cocktail writer Charles H. Baker Jr. happened to be visiting Cuba at the time, it was manifest destiny that he would add to the beautiful and tragic island’s rich cocktail history with a spin on a Manhattan. Cultural imperialism never tasted so good.

Combine the liquid ingredients in a mixing container with lots of ice. Stir very vigorously and strain into a chilled cocktail glass. Add the cocktail cherry. Remember, just because something is a garnish doesn’t mean it’s unnecessary.

I haven’t read any of Charles Baker Jr.’s writing – his acclaimed two-volume The Gentleman’s Companion is scheduled for arrival shortly – but I do know he was right about at least two things. First, he strongly advised against using partially spoiled eggs for cocktails. Check! Second, Remember the Maine is a very good drink.

Baker’s drink is, however, a tricky one that demands quality ingredients. For starters, it seems to favor robust and harder-edged ryes like 100-proof Rittenhouse. Conversely, Remember the Maine can turn foul and medicinally both over sweet and over bitter using Canadian Club’s unusually sweet 100 Percent Rye expression. Switching over to a CC’s far superior 9-year-old reserve Canadian whisky – all CC is marketed as rye in Canada – was no disaster, but less than memorable

I used two absinthes at fairly opposite ends of the spectrums of taste, cost, and color. La Clandestine gets its name because it started out as a bootleg product designed to get around anti-absinthe laws by being clear instead of having the more typical green coloring. It’s well-regarded among absinthe fanciers and proved to be an excellent choice in this liquid tribute to yellow journalism and bloody red jingoism. Like most absinthes, it’s expensive at $26.00 for a small 200 ml bottle here in California — a fifth will set you back by roughly $75 to $80. Parnesse, on the other hand, has to be the cheapest absinthe on the market, selling for a ridiculous $17.00 for a standard 750 ml bottle. One writer found it to be acceptable but The Absinthe Fiend compared it to both Mad Dog 20/20 and – I’ve never actually seen this – gas station sushi. All I can say is the Parnesse is insanely sweet and, with only half a teaspoon, can easily ruin this drink and probably most others. Absinthe’s sharpness plays a huge role in this drink even at only ½ a teaspoon. If you can’t spring for a decent bottle of absinthe, more affordable standard substitutes like Herbsaint or Pernod should be fine. By the way, some recipes suggest simply rinsing the glass with absinthe Sazarac-syle but I found the results of that insipid.

I won’t stop you from trying other sweet cherry liqueurs but Cherry Herring is a standard go-to because it’s delicious and I’m not sure there’s any other product that matches it. Since it’s specified in the original recipe, I’m not messing with it.

On to sweet vermouths. Martini worked fabulously but those who want their drink less sweet may enjoy somewhat higher-priced Dolin sweet vermouth. Note, however, that your vermouth choice may impact the most interesting of the options available in a Remember the Maine — bitters or no bitters?

Most recipes don’t mention bitters but some do and, in many cases, I found them to be a make-or-break addition, especially when using milder or sweeter ingredients. For example, I thought bitters were perhaps unnecessary in versions of the drink employing harder-edged Rittenhouse Rye and less sweet Dolin. However, those made with the more sippable George Dickel Rye and sweeter Martini demanded the punctuation provided by Angostura. Start without the bitters and, if you think it needs them, you can add a drop directly to the glass as I did one time.