Trending
You are at:Home»Vices»Drink of the Week: The Sazerac (revisited) 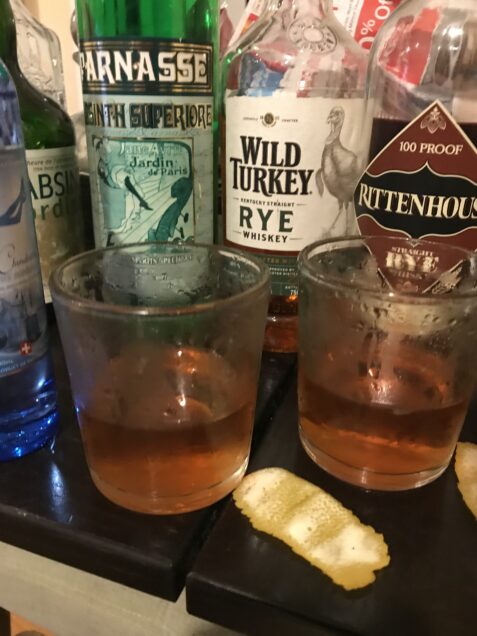 Before these blog posts were first suggested to me, I had a repertoire of just a few classic cocktails. The Sazerac was a favorite but also the most complicated to make according to the instructions I was using back. I was a newbie then myself and now it seems pretty easy and very simple. An Old Fahioned with a twist or two, and no drink without fresh juice is ever much of a hassle.

I had learned of the Sazerac listening to Rachel Maddow’s seemingly forgotten “Cocktail Moments” on her almost as forgotten Air America radio show and it made sense for it to be one of the first cocktails I explored here. Now, an enjoyable, myth-shattering episode of the “Life Behind Bars” podcast from 2018 has inspired me to revisit the drink that the city of New Orleans has named its official cocktail. (I, unfortunately, didn’t even know Sazerac’s existed the last time I was there, pre-Katrina.)

As hosts David Wondrich and Noah Rothbaum pointed out, while the prior mythology behind it has been debunked, the Sazerac itself has it no way been diminished. It is a simple, strong, and endlessly variable drink. It clearly deserves to take a place right alongside the Martini as the most efficient and enjoyable way to have some serious and speedy relaxation or to get seriously buzzed, if that’s your agenda.

Chill an old fashioned/rocks glass by filling it with ice and water or, better, leaving it in a freezer for a few minutes. Next, put your rye or cognac in a cocktail shaker or mixing glass along with a dash or three of Peychaud’s bitters and a teaspoon of superfine sugar (strict traditionalists thoroughly muddle a sugar cube). Next, take your chilled glass and pour a very small splash of your choice of anise liqueur into the glass. Carefully tip and then spin the glass sideways so as to coat it with liqueur as completely as you can. Dump out any remaining absinthe/Herbaint/pastis. Next, fill the glass/shaker with ice. Nex, you can do the orthodox thing and stir vigorously or be a crazy cocktail heretic, as I sometimes am, and shake the thing. You may well prefer it that way. Next, strain it into your prepared glass.

Finally, take a very thin slice of lemon peel, run the outer lemon peel around the rim of the glass and then twist it over the drink to express the citrus oils over it. This is actualy the technique you should use for any cocktail calling for twist of lemon, by the way. However, in this case traditionalists and I tend to agree that you should then discard the peel rather than leave it in as a garnish but it’s definitely fine if you prefer to leave the peel as you would ordinarily. Sip slowly but you might speed up against your better judgment because it’s great.

While the instructions might be a bit longer than for most cocktails, at heart the Sazerac is an easy drink to make. Sweetened whiskey or brandy with bitters, stirred with ice and poured into a glass coated with anise liqueur and a lemon twist. Its simplicity allows for nearly infinite experimentation as there are as many variations as there are brands of rye, French brandy, and liqueurs made with the licorice-like anise herb.

Some people like to use a combination of Peychaud’s and Angostura aromatic bitters but I prefer to keep things classic and I stuck with the more candy-like, pink Peychaud’s — a legendary New Orleans brand now made by the Sazerac Company. (The company originally sprang from the Sazerac Coffee House in NOLA but is now based in Kentucky; it’s not clear what was named after what.) My ryes were Wild Turkey and Rittenhouse. The brandies were Hennessy Cognac, Reynal, and my new favorite bargain product, Sacred Bond 100 proof brandy from Christian Brothers. I mostly used La Clandestine Absinthe which is high-quality stuff that’s only affordable because it’s sold in small bottles for us cheapskates. I also messed around with my dwindling supply of Absinthe Ordinaire, my plentiful Herbsaint, and Parnasse Absinthe Superiore, which is considered undrinkably inférieur by absinthe aficionados but isn’t bad in tiny doses, perhaps.

Sazeracs are, generally speaking, strong but delightful. Even if you go with three ounces to a single teaspoon of sugar, the sweetness remains and the lightness and confectionary flavor of Peychaud’s really helps. Wild Turkey and Rittenhouse Rye were both near perfect and I actually like the way the hated Parnasse absinthe gave a little extra sweetness to the thing. Since Rittenhouse is bottled in bond and therefore 100 proof, it’s makes for an undeniably classic concoction, but maybe not ideal for all cocktail for newbies.

One of David Wondrich’s discoveries was that the idea that the original Sazeracs were made with cognac appears to be fake history. That doesn’t make brandy Sazeracs any less delicious, however, with a notably more mellow flavor my in-house guinea pig preferred. Hennessy was sweetly understated, Reynal a bit less so. Sacred Bond, a rare bottled-in-bond 100 proof brandy with the spirit of a rye, was anything but understated but also awesome. Not so awesome was my experiment with a brand of calvados (French apple brandy). The apples just messed the whole thing up.