Trending
You are at:Home»Vices»Drink of the Week: The Vesper (Reconsidered) 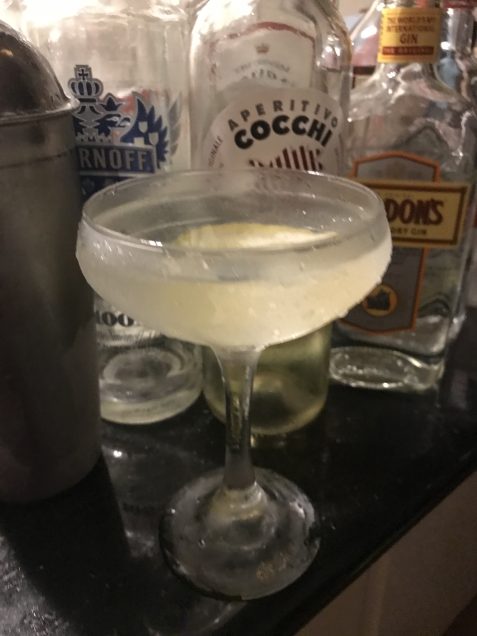 The absurdly alcoholic Vesper is one of the most celebrated cocktails that not many people like.

Once known only to hardcore 007 fans and cocktail geeks, the Vesper appeared in the very first James Bond novel and was either created by author Ian Fleming himself or, if you believe Wikipedia, his bartender friend, Ivar Bryce. The drink finally hit the big time 53 years later when Daniel Craig ordered it onscreen in the wildly successful film version of the original Bond adventure, “Casino Royale.”

But there was a problem. As cocktail super-historian David Wondrich explained in 2006, the ingredients in the drink had changed so much over the years that recreating it required a few brand adjustments and, oh yeah, getting ahold of some quinine powder. Still, there was a quasi-acceptable version that was easy to make and it was something I absolutely had to try. I did so back in 2012.

So why come back to the Vesper right now? Isn’t Bond, well, you know? The answer is Cocchi Americano – a delicious white aromatized wine with a quinine kick that I discovered while working on the Corpse Reviver #2 late last year.

Lillet Blanc is the modern-day version of the originally specified Kina Lillet but — because it lanks the punch of quinine — it’s always been an uninspiring substitute on its own. Adding bitters helped, but not a whole lot. It turns out there was a vastly superior option.

Cocchi Americano, its misleading name notwithstanding, was just starting to be introduced to the US market in 2012 and it took me this long to catch up with it. After using it in the Corpse Reviver in December and loving it on the rocks with an orange slice and some soda water, I wasn’t about to wait for the next Bond reboot to give the Vesper a second test drive. (And yes, I know it’s Vesper and not Vespa! Better metaphors will be gladly accepted.)

Combine all of the liquid ingredients into a cocktail shaker. Shake vigorously – do not stir lest you be visited by the finicky racist ghost of Ian Fleming! Most cocktailians will tell you to stir this despite Fleming’s famed preference, but I think they’re wrong with this particular drink. This thing demands to be diluted. Strain into a fairly large well-chilled cocktail glass. (Cocktail glasses were smaller in 1953 so Ian Fleming called for a champagne goblet.)

Just one last step. Take your lemon peel, run the shiny side along the rim of the glass, twist it over the drink to express the citrus oils over the beverage, sip and consider how lucky you are not to be 007. Sure, he got the dames and the fancy hotels and what not…but, man, all of that stress! No wonder he needed a gargantuan cocktail to take the edge off.

There’s a good case to be made for making a full bore Vesper your only drink of the night. Bond’s excuse was that he wanted one cocktail and just one before dinner when he was on a big job. I personally love how consuming a Vesper fairly quickly on an empty stomach feels but, of course, this drink is a buttload of booze and not for the faint of liver.

That being said, when you get the Vesper right it’s a solid alternative – I would even say an improvement – over a dry martini. (I prefer super wet 50/50s.) The herbal gin flavors are slightly diluted by the vodka. A lot more much-needed dilution comes from all that controversial shaking. The half-ounce of Cocchi adds the right kind of extra-subtle bitter-sweet flavor to this cocktail monsterpiece.

On the other hand, there’s more to making the best modern-day Vesper than using Cocchi – though I do think that’s at least 50 percent of the job.

The original literary recipe specified Gordon’s Gin – still an outstanding bargain of a bottom-shelf gin. It’s very decent stuff but, at 80 proof instead of 94 proof, it’s probably been reformulated multiple times since ’53. I still think it works just extremely well – I might even prefer its lighter/less alcoholic flavor in a drink this absurdly strong. Nevertheless, Tanqueray Rangpur, Bombay Dry, and Aviation Gin were all fine; Bombay might be the closest to what Gordon’s was like back in the day.

Somewhat contradictory to my preference for 80 proof Gordon’s, I found that David Wondrich was definitely on to something when he specified 100 proof vodka in his article. Using the last of my old bottle of 50 ABV Smirnoff was in better harmony with the gin and Cocchi than theoretically superior/smoother 80 proof Stolichnaya. I admit to being too lazy/cheap to track down the 100 proof Stoli David Wondrich used but this is vodka we’re talking about. One decent brand is not so different from another.