Trending
You are at:Home»Vices»Drink of the Week: The Margarita (Revisited) 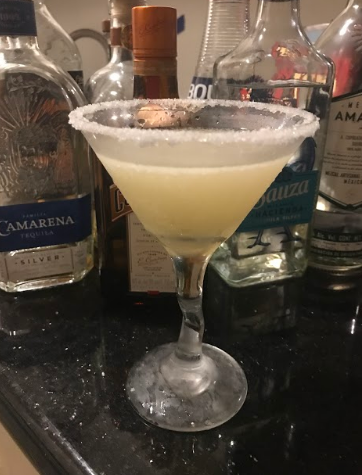 After a couple of months of messing around with mezcal and finding its arguable equivalent to the Margarita, I realized I had a cocktail-sized hole to fill. It’s been about 10 years and 6 months since I looked at the standard version of the world’s most popular mixed drink.

The Margarita is a relatively recent invention and was all but unknown before the 1970s. That’s not surprising since tequila itself was exotic to most Norte Americanos until about the time a surf-tune named for the spirit hit the Top 40. David Embury – author of the opinionated booze-lit classic, The Fine Art of Mixing Drinks – dismissed it, detecting an aroma “faintly resembling a combination of overripe eggs and Limburger cheese.” He did admit, however, that a new brand called Jose Cuervo was cheese and egg-free, odor-wise. While people do sometimes smell eggs in bad tequila, I have to imagine that Embury’s depressing overt racism may have played a small role, but that was 1948.

Today you can spend $6,670.00 for a bottle of tequila, and slamming shots at Acapulco’s is not (yet) considered woke virtue signaling. Tequila has emerged as every bit the equal of whiskey in terms of quality and range and a well-made Margarita can take on a whiskey sour, a Tom Collins, or a Manhattan any day of the week.

Combine all of the ingredients in a cocktail shaker. Next, take a chilled glass, wet the rim with a lime, and then slowly spin it around on a plate with plenty of salt on it so that it coats the entire edge of the glass. Next, put ice in the shaker and shake as vigorously as you can stand. Strain it carefully into the rimmed glass. For an extra-refreshing drink ideal for the warm weather we’re not having, you can use an old–fashion glass and pour your margarita over fresh ice.

While it’s a sour and contains an entire ounce of lime juice, the Margarita can be a very sweet drink thanks to that whole ounce of orange liqueur and the inherent sweetness of tequila. The salt rim is a much-needed counterpoint. As for the type of tequila, reposados and anejos tend to be sweeter, and you can make a great margarita using one of those, but a decent, drier blanco is a more reliable foil for the liqueur.

Speaking of liqueurs, most margarita recipes call for triple sec – and cocktailians agree that Cointreau is the king of triple secs and the best choice. I used to be a borderline Cointreau –contrarian but doing this job can change a guy’s taste buds. If you want a truly great drink, it may be a must. Margaritas I made with Bols, a sort of baseline choice among triple secs, had a slightly insipid edge; my non-cocktail-snob guinea pig agreed it wasn’t as good. For true cheapskates, however, the very cheapest triple sec I own, $7.00 Doc Wells, is slightly alcoholic liquid orange candy. What I like about it is that it lacks that slightly medicinal fruit liqueur taste. The guinea pig and I agreed it made for an excellent second-tier margarita.

As for base spirit brands, I had good results with blancos from cheap-but-decent Sauza, mid-range Camarena, and the last of my outstanding (and free) bottle of Prospero. I also had decent luck with reposados from Hornitos, Corazon, and Arriete. Espolon’s anejo was a little too complex and didn’t quite gel.

My very favorite iterations, however, were non-canonical as they were made with mezcal. For these, I had truly outstanding outcomes when I switched from salt to mezcal’s bestie, sal de gusano – and that was just using Trader Joe’s house brand. When I went high-end with some of my remaining Mezcal Amarás Cupreata, the slight bitter notes of Cointreau and the acidic and earthy flavors of the cupreata created an exciting harmony. It was less “California Girls” Beach Boys and more “Gimme Shelter” Mick Jagger and Merry Clayton.