Trending
You are at:Home»Vices»Drink of the Week: The Mayahuel 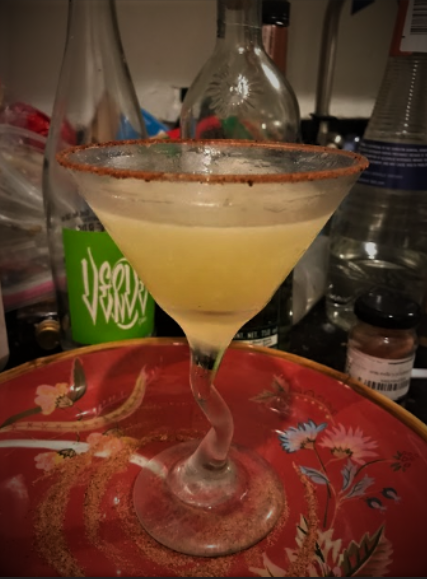 You can make a margarita with mezcal in place of tequila but it’s very much its own spirit and deserves its own flagship cocktail. I nominate the Mayahuel.

Likely invented at a shuttered New York cocktail bar of the same name by bartender Phil Ward, and still on the menu at a mezcal-centric tavern in D.C., the Mayahuel has the right balance of sour, sweet, boozy, and floral/earthy flavors to bring out the best in mezcal. It adds two transformational ingredients to the margarita template: agave and a special type of salt that’s kind of buggy.

You see, mezcal is traditionally consumed straight, in a small and wide clay cup called a cupita. Like a brandy snifter, the wide opening allows the drinker to enjoy the aroma of the spirit while taking tiny sips. The mezcal ritual also includes paring the booze with small bites of food, including orange slices that have been sprinkled with a seasoned salt you’ll never find from Lawry’s.

Sal de gusano means worm salt in English but that’s a misnomer in any language. The ingredients include salt, chili peppers, and the ground-up barbecued remains of a species of moth larvae that typically live in the agave plants used to make mezcal. These larvae are the same “worms” you might have seen at the bottom of a cheap mezcal.*

I understand people’s misgivings but there’s nothing wormy or insectile in the taste of sal de gusano. It’s pleasantly smokey and reminds me of a gourmet version of whatever it is that they put on barbecue flavor potato chips. Moreover, when the flavor of the worm salt meets mezcal, something magical happens on the tongue. It’s the most expensive salt I’ve ever bought but it’s an investment that offers major flavor ROI.

2 ounces mezcal (or maybe 1½ if you like your drinks sweeter )
¾ ounce Cointreau or another orange liqueur, maybe.
¾ ounce fresh lime juice
¼ ounce agave
Sal de gusano – extremely desirable but not quite mandatory garnish

Combine all of the ingredients except the salt in a cocktail shaker. Next, take a chilled cocktail glass and wet the rim, preferably with a left-over lime shell. As you would for a margarita, run the rim in a pile of worm salt (or some other kind of salt if you want). Next, add ice to the cocktail shaker and shake very vigorously. Strain into the glass, sip and see what you think of the interplay between the mezcal, the sweeter flavors, and, I hope, your priceyish but easy-to-find online sal de gusano. ( I got a few ounces of the stuff for about $15.00.)

The more times I made the Mayahuel, the more I liked it but I made one change after my first go-round. Almost all the recipes I’ve seen call for 1½ ounces of mezcal. I found that too sweet, though my in-house guinea pig didn’t have a problem with it. For me, however, adding that extra half-ounce of the base spirit was a serious improvement.

And now here’s where I talk about the various brands of mezcal I tried with the Mayahuel. Cynics might second guess me, but my free $50-$60 bottle of Mezcal Amarás Cupreata made for a borderline cosmic cocktail experience. Consumed in the traditional way, it’s an extraordinary product. In a Mayahuel, it’s more accessibly extraordinary. The earthy floral notes are accentuated and the sal de gusano delivers a burst of complementary salt and smoke.*

Mezcal Verde Amarás, their mid-shelf cocktail-friendly expression, was a strong second. I also tried two bottles I bought at the Studio City Trader Joe’s — Ojo del Tigres and Espada Pequeña Mezcal Artesanal – which I now realize is another surprisingly strong TJ’s private label bottle! All of the drinks were good but, of the more affordable brands, I’d still give the Verde version a very slight edge for an extra level of tangy brightness, and, I hope, not just because the $0 price was so right.

Finally, let’s talk about the orange liqueurs. Many recipes called for triple sec and others called for Cointreau – the most gourmet of triple secs. In this case, there’s a good case to be made for going high-end. When I tried the Mayahuel with Bols’ low-priced but reliable triple sec, the drink was relatively flat in flavor, almost insipid. The slightly bitter complexity of Cointreau, it turns out, was more important than usual. I had better luck with the mid-priced and flavorful Mathilde Orange Liqueur. It doesn’t call itself triple sec on the bottle but, at this point, I have no idea what triple sec even is.

* My underage drinking buddies used to call this “the tequila worm” — a double misnomer. In our defense, we were young, stupid, and almost 20 years pre-Internet.

**Some Mayahuel recipes insist on mezcal made from the espadin strain of agave, which appears to be far more common in mezcal than the cupreata strain. Based on the luck I had with Mezcal Amarás Cupreata, I have no idea why this is.