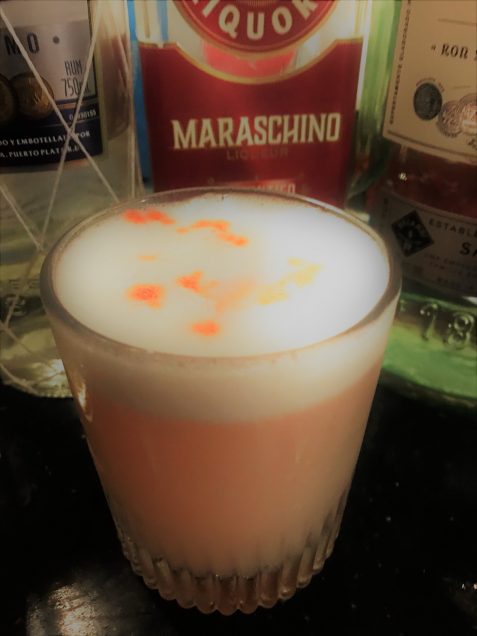 It’s been a rough week/month/year/decade/century/eon. Labor Day Weekend, however, is here and while many realities suck big weenie, we can focus on things that are fun.  And, for me, fizzes using egg white are easily the funnest kind of mixed drink. They are the bomb, the cat’s PJs, and all that, plus a bag of kettle-cooked chips, the ne plus ultra of boozy refreshment if you will. Disagree? I will fight you.

Today’s drink is my transformation of the already delightful Hemingway Daiquiri into a delightfuler, more sugary, milk-shake headache inducer. I’d like to think it could have lightened the heavy heart of Papa H, even as it taxed his liver and kidneys.

Combine all of the liquid ingredients in a cocktail shaker without ice. “Dry shake” to fully emulsify the egg white and get a froth going – this is especially important if you’re using egg white straight out of the egg. Add ice and shake as vigorously as you can. Strain into a small, well-chilled rocks glass or something roughly the same size. Top off with carbonated water. A nice white cap should form over the drink. Add the bitters of your choice, and maybe a cherry, as a garnish. Sip away.

It’s the same selection of rums and maraschinos as with the legit Hemingway Daiquiri last week. Brugal Extra Dry, Flor de Cana, and good ol’ Bacardi for the rums; pricey-silky Luxardo and brightly-sweet, sweetly priced Lazzaroni. For the bitters garnish, I primarily used Angostura and Peychaud’s.

My favorite version used the more basic ingredients, Barcardi and Lazzaroni. I spiced it up, however by adding grapefruit bitters, which add flavor but no visuals, alongside the lightly floral Peychaud’s. Using Flor de Cana and Luxardo with the same bitters combo made for a tangier drink. I enjoyed it but it was less pleasing to the DOTW house guinea pig.

One last note, I originally tried this drink with superfine sugar, my frequent preference since it’s simpler and dissolves even in very cold drinks. Alas, the sweetness just carried better using simple syrup. In truth, there’s no reason not to have simple syrup on hand if you’re making cocktails at all frequently. It’s super easy to make if you’re too cheap to buy some and pretty cheap to buy if you’re too lazy to make some.