Trending
You are at:Home»Vices»Drink of the Week: The Hemingway Daiquiri 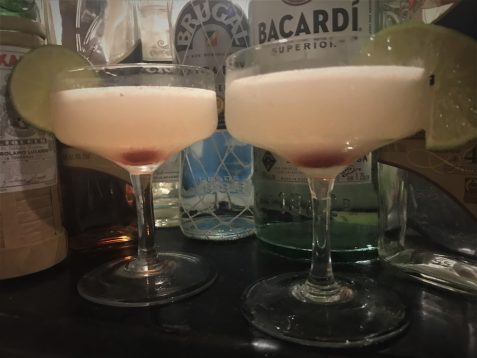 As promised last time, this week we have the single most famous daiquiri variation which is named for the single most iconic alcoholic author. Jeffrey Morgenthaler relates one legend behind the drink: Nobel Prize-winning super-author Ernest Hemingway wanted a low-sugar beverage since his array of health problems included diabetes — not to mention depression, a  long history of concussions, and anything else you can think of that excessive drinking might worsen over the long-term while relieving in the short-term. Many believe, however, that it was the even lower sugar Floridita from the last post that Hemingway drank in double-doses (hence the references to these drinks as “Papa Dobles”).

Not the most fun cocktail origin story, but there’s nothing depressing about the actual Hemingway Daiquiri as long as you don’t go Hemingcrazy. It’s a nicely balanced refresher that adds grapefruit juice to the Floridita for a kind of simple perfection.

Combine the non-garnish ingredients in a cocktail shaker with lots of ice. Shake vigorously and strain into a chilled cocktail shaker. Forget any bad Hemingway writing impressions – I did that last week – but enjoy the heck out of this one.

For starters, while I think both of the above recipes are good, the first version is the most common one you’ll find online for a reason. It goes down nice and easy and will make few drinkers pucker. The second one, which I swiped from Jeffrey Morganthaler’s video, is for those who like their sours sour – but not to the point of insanity.

With the right combination of ingredients, the sweeter Hemingway Daiquiri can be darn near spectacular.  Both drinks are more interesting and full-bodied than the Floridita, which is still a very nice drink.

My rums were Bacardi Superior (a superior deal at $15-$19  for a double-size 1.75-liter bottle), Brugal Extra Dry, as well as white and aged Flor de Cana. As with the Floridita, my maraschinos were Luxardo, the silkier standard, and Lazzaroni, an excellent but simpler liqueur.

I loved using the Brugal – just a couple of bucks more expensive than the other very inexpensive brands. I’m not sure why sometimes the drier rum makes the product taste sweeter and sometimes it makes it taste drier, as you’d expect. This time around, the drinks I made with it were well above average but they were somewhat drier and more bracing. On the other hand, the best overall Hemingway was made with white Flor de Cana, only a couple of bucks pricier than Bacardi, with the silkier sweetness of the Luxardo.

Wanting to see if I could balance out the more sour version of the Hemingway Daiquiri by using the sweeter Flor de Cana 5 Anejo, both I and my in-house guinea pig agreed that the combination produced a drink that tasted completely like grapefruit. Seriously, just grapefruit. It’s a roundabout path to a fancier Greyhound but there you go.