Trending
You are at:Home»Vices»Drink of the Week: The Caneflower Cocktail 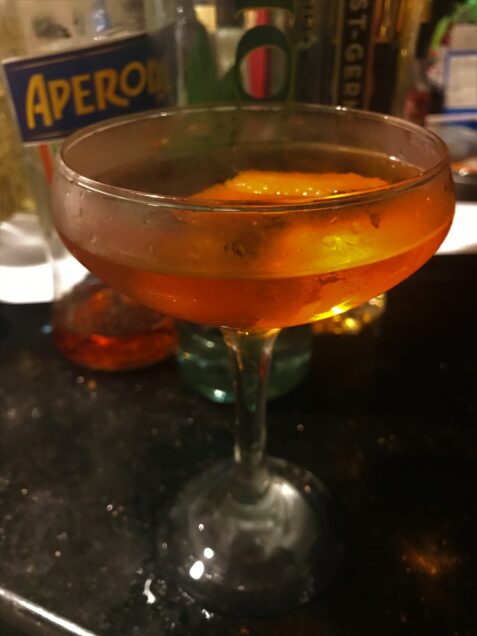 My DOTW today is a simple beverage that I initially had mixed feelings about, but I’m happy to say I found a simple cure for what ailed it. More booze!

Attributed to celebrity bartender Jeffrey Morganthaler, for me, the Caneflower started as a partial answer to the question: “Golly, I have an enormous bottle of St. Germain Elderflower liqueur and I’ve barely touched it! What now?”

The initial versions of the recipe I tried were a little too sweet for my taste, though my in-house guinea pig was okay with a flavor he likened to fruit punch. Since it wasn’t a particularly refreshing drink – and wasn’t likely to be with only alcoholic liquids involved – a punch was not what I had in mind. I decided to go full-adult-beverage and simply boost the base spirit. It worked! Still sweet but balanced by the relative dryness of the base spirit.

The booze I boosted for the Caneflower Cocktail was cachaça. It’s a sort of Brazilian rum made directly from sugar cane, as opposed to molasses extracted from the cane. The bottle I had on hand was Leblon, probably the best-known brand in the U.S. It got that way at least partly due to a vigorous marketing push about ten years back.

That’s no doubt why they gave me three – count ‘em – three 750ml bottles of Leblon. It was the very early days of this blog, I was underemployed, and I was quite pleased with the haul. One bottle was used promptly for my explorations with the best-known cachaça cocktail. One bottle was used as a last-minute party entry offering. Cut to about seven years later when I opened up the last bottle for Bitter in Brazil, which gave me a chance to go over some distressing developments in the Americas. (That’s DOTW with me at the helm: come for the booze; tolerate the political musings!) I think it also tasted good. And now we have this…

Combine the liquid ingredients in a mixing glass or cocktail shaker with lots of ice. Stir very vigorously and strain into a well-chilled cocktail glass. Take your citrus peel and run the shiny side around the rim of the glass and then twist it over the drink to express all-but-invisible but very important oils into the drink.

I’m pretty confidently recommending my version of the Caneflower to anyone who might have some cachaça on hand. It’s bright, fruity, and sweet but nothing like the punch they gave you in K-12. A very nice pre-dinner or post-dinner drink if you ask me.

I’m trying to scale back my liquor spending – alas, no expense account for me – so I didn’t look into how many other brands of cachaça are available here in sunny SoCal. Happily, Leblon’s old bottle (opened circa 2018) tastes as good as ever – liquor lasts indefinitely until you open the bottle, and it lasts for quite a while after that. Adding an extra half ounce was just what the Caneflower Cocktail needed.

Moving on to ingredients, the Difford’s Guide recipe calls for Aperol “or other Italian red aperitivo.” Since the drink the Caneflower was presumably inspired by used Campari – Aperol’s more bitterly divisive big brother – I tried that. The added bitterness and sweetness clashed miserably with the Leblon and there was no balance. You could try some milder Amaros but it might be an awful lot of trial-and-error.