Trending
You are at:Home»Vices»Drink of the Week: Bitter in Brazil 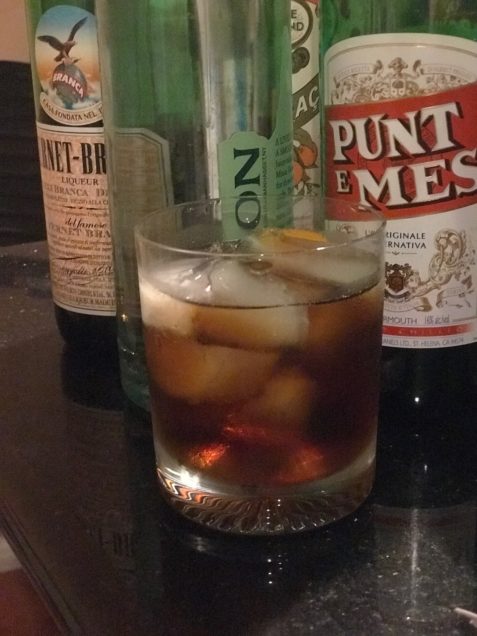 My habit of relating cocktails to current events has really gotten the bitter of me this week. Yuk-Yuk.

I stumbled over Bitter in Brazil quite innocently via Difford’s Guide when I was looking for another cocktail featuring wondrously bittersweet vermouth Punt e Mes. The name  put me in mind of the ongoing political disaster in Brazil and the recent, bleakly hilarious, infuriating John Oliver segment about it. The idea that some people on the United States right think that the Christo-fascist is a better choice than ordinary corrupt pols, leftwing though they may be, makes me think that they should stop implying that everyone a hair to their left is pro-terrorist and consider the log in their own eyes.

Okay, okay — I know, this isn’t Op-Ed of the Week or annoying biblical allusion of the week, but, geez, people can be awfully indifferent to evil. That’s kind of a long-running problem that began long before any of us were born and will no continue long after I’ve been tortured to death by Proud Boys juiced up on Rock Star and saltpeter. So, what I’m trying to say, is that’s its time for a drink.

Combined the liquid ingredients in a mixing glass or cocktail shaker. Stir (or shake if you’re possessed by the spirit of Ian Fleming) and strain into a large rocks glass over fresh ice. Add the orange twist, sip, and think of why it’s much better to taste bitter than to be bitter, even in an often embittering world.

This is a nice, actually much more sweet than bitter drink which is probably a pretty good way of introducing cocktail newbies to the distinctive flavor combination that is Punt e Mes. It is however, pretty brand specific if you don’t have multiple brands of cachaça around, and I don’t. So I just went with the best known brand here in the USA because I’m a big, poor, cheapskate and because I still had a free bottle of Leblon, which I’ve been hanging onto since 2011. I can’t say anything about other brands, but it worked very nicely. In any case it looks like the Capucana specified by Difford’s Guide is not available on this side of the Atlantic.

I did, however, try switching from Pierre Ferrand Dry Curacao to the usual Hiram Walker curacao. It was sweet. Very, very, sweet. Stick with the PF.