Trending
You are at:Home»Vices»Drink of the Week: The Sloe Gin and Gin Fizz 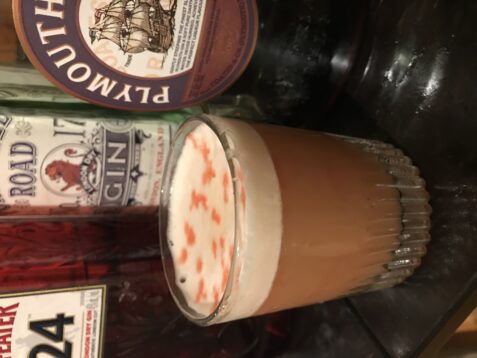 Despite the cocktail revolution, most people still don’t know what sIoe gin is. The first thing you should know is that it’s only gin in the same way some super-sweet liqueurs like apricot brandy or cherry brandy are brandy — they may be made with brandy but they are very definitely not the distilled spirit we call brandy. This is a fruit-based liqueur made with gin.

So, what is a sloe? Sloe berries are found on blackthorn bushes and are apparently similar to cranberries in that, on their own, they are too tart for most of us. Add a buttload of sugar, however, and you’ve got something suitable for preserves and for infusing with gin.

I finally had my first Sloe Gin Fizz back in 2015. With a decent sloe gin, it’s a wonderful drink.  Even so, it’s always seemed to me that the only problem with the Sloe Gin Fizz was alcohol — there isn’t enough of it!

Mixologist Colin Carroll of Portland;s defunct Trifecta Tavern had the right idea by adding actual gin to the Sloe Gin Fizz. Still, when I tried the recipe featured at Imbibe, it didn’t quite come off. It might have been that I don’t have the makings for the kind of single giant ice cube the recipe calls for — those giant ball cubes aren’t really my jam — and maybe that just threw off the entire blend of flavors. So, I tweaked the recipe to make it more like the Silver Fizz and a traditional Sloe Gin Fizz. I’m calling my slight variation of the late Oregon tavern’s drink by what it actually is.

The Sloe Gin and Gin Fizz

Combine all of the ingredients except the soda water and bitters in a cocktail shaker. Shake without ice to emulsify the egg white. Add lots of ice and shake vigorously for at least 15 seconds or as long as you can stand it. Strain into small rocks glass that has been well-chilled. Top with ice-cold soda water and wait a second for the head to form, then sprinkle the Peychaud’s bitters on the foamy head as you would in a Pisco Sour. The result will look something like a mid-20th-century cartoon character with measles. Sip and embrace the boozey chill.

While I can’t argue that this sloe gin fizz is equally refreshing and good tasting as it’s lower-proof ancestor, it is a fine drink in its own right. Sour flavors prevail but with a richly sweet undercurrent. Moreover, it will also mess you up, if messing up is what you want.

As I found five years back, it’s pretty essential to use a good sloe gin in the traditional Sloe Gin Fizz and, though I have some inferior stuff in my overstocked cabinet, I just couldn’t work up the energy to even give it a spin with the Sloe Gin and Gin Fizz. So, I stuck with Plymouth Sloe Gin; it’s not the only quality sloe gin out there but, given what I’m seeing here in my corner of Los Angeles, you might have a hard time finding any other brands. In fact, you may be lucky to find Plymouth’s but worth the trouble.

Of course, it’s not hard to find alternative brands of dry gin, so there’s where I played around. I honestly think regular Beefeater may have produced the cleanest-tasting sloe-gin gin concoction. The versions I made using new favorites like Beefeater 24 and Portobello Road offered slightly more complex flavors but I can’t say that they were any better, though they weren’t appreciably less good, either.

The one ingredient choice that really did make a difference was using demerara syrup in comparison to regular simple syrup.  I try to make these drinks as easy to make at home as possible and, once upon a time, I would have simply shunned the idea of insisting that a drink required a product that is either ridiculously expensive, if you can find it, or which had to be made at home. However, demerara sugar from C&H has been appearing on grocery store shelves lately here in the San Fernando Valley and perhaps in your neck of the woods, too, especially if you’re near a Smart & Final. Once you’ve got that, it’s not so hard to put equal parts of sugar and water together with the help of a low flame on your stove and some stirring. If you have some left over, and you very likely will, you can definitely use it to make a very easy going old-fashioned. It’s not very much trouble, not expensive, and the added flavors of an unbleached sugar adds a bottom to the flavor that I think makes all the difference here.