Trending
You are at:Home»Vices»Drink of the Week: The Silver Fizz 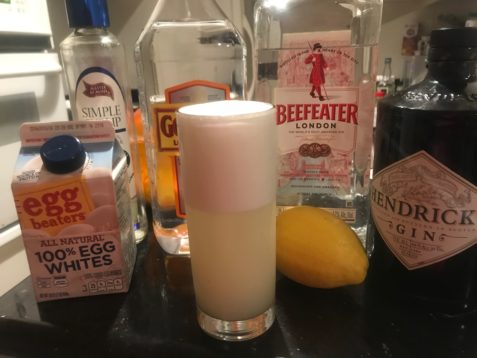 In most places, summer is supposed to start right after Memorial Day, but here in SoCal, weather wise, it usually doesn’t really kick in until mid-July or later. However, our traditional June gloom has taken a powder for now, and it’s starting to feel a little like summer. In Las Vegas, where I’ll be by the time you read this, they are having temps around 107 right now, but it should be cooling down to an Arctic 100 or so before my arrival.

So, yes, it’s the perfect time to start messing around with the chilliest, most refreshing of cocktail genres — the Fizz, one of the New Orlean’s greatest exports this side of Louis Armstrong and Alan Toussaint. I’ve already covered a couple of renowned entries in the field: the Ramos Gin Fizz and the Sloe Gin Fizz. However, I’ve neglected the simplest and most basic fizz, which I’d say is at least as good as the others. We’ve all been missing out!

Combine the gin, lemon juice, sweetener, and egg white in a cocktail shaker. If you’re using egg white straight out of the egg, dry shake (shake without ice). You can skip this step if you’re using a packaged egg white, because it’s already mostly emulsified. Next, add ice, and shake for about as long as you can stand it. Strain into a Tom Collins/highball glass. Top off carefully with soda water. The drink will rapidly develop a beautiful head — somewhere between beer and the top of a cappuccino or Irish Coffee — so add the water gradually. Wait a moment for the head to fully develop and sip. Contemplate what it must have felt like this to be drinking this icy cool delight on a stultifying hot and ultra-humid New Orleans summer day when air-conditioning was but a dream.

The Silver Fizz is simple but, man oh man, it can really hit the icy spot. If you’re soda water is well chilled and  you drink it immediately,, be prepared for a delightful brain freeze. I should note that this drink is one of the many great cocktails that was once considered a morning beverage/hangover cure. While the “hair of the dog that bit you” is a debatable strategy, the lemon, ice cold soda water, and egg white must have helped revive countless over-imbibers. Even today, I’d say this is a very strong alternative to a Mimosa or Bloody Mary.

Now, I should add that my recipe here — which I saw somewhere on the Interwebs and can’t seem to re-find — is very much on the sweet side of the very wide spectrum of Silver Fizzes. Dave Wondrich’s super-severe take has an entire ounce of lemon and but one teaspoon of sugar, others have less sweetener but also less lemon juice. Most recipes have two ounces of gin, which is just fine. Others use Old Tom Gin, which is sweetened.

As for the brands of gin, even at this small amount, your choice will make a big difference. But with Beefeater, Ford’s, Hendrick’s, and Gordons, the Silver Fizz was equally tasty, though in slightly different ways. Ford’s seemed to tone down the sweetness, while Beefeater and Gordon’s toned it up.Hendrick’s was somewhere in the middle, with its cucumber infusion doing and interesting number among the usual juniper and what not. Use whatever pleases you. This may be the ultimate easygoing summer drink.