Trending
You are at:Home»Vices»Drink of the Week: 11 Mothers 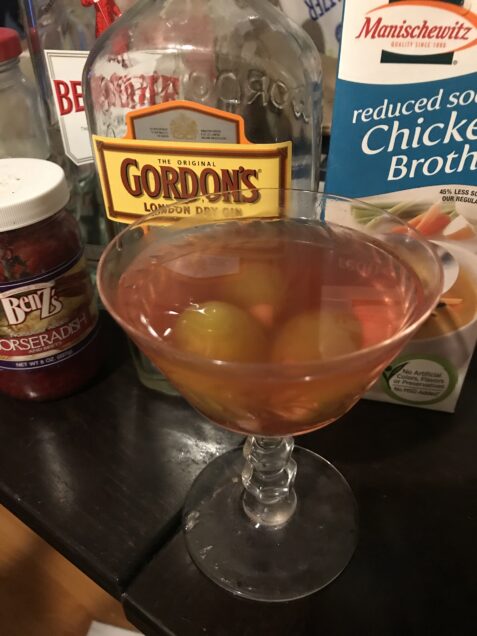 If we’re doing any drinking these days, far more of us than ever before are doing it alone. Sure, some of us have permanent company but I’m guessing many of us don’t have it in drinking — giving alcohol to pets is very ill-advised — not to mention all the people with nondrinking significant others or housemates.

I started working on 11 Mothers several weeks ago — an allegedly immune-boosting spin on a dirty martini or Gibson and a Bullshot — back when it seemed less clear to a lot of us, myself included, just how huge this COVID-19 was going to be. I was a dummy.

I planned a series of drinks inspired by various movies and what not but my usual slightly dark sense of humor didn’t seem appropriate. It’s one thing to make a drink inspired by a movie about a dinner party that turns into a debacle because, for some reason, nobody can bring themselves to leave and nobody from outside can bring themselves to enter. On the other hand, I’m pretty sure the title of the 1962 film, Luis Bunuel’s The Exterminating Angel, would be in poor taste as a cocktail name right at this moment…even during Passover time.

11 Mothers, on the other hand, is inspired by the title of “Garlic is as Good as Ten Mothers,” a 1980 featurette all about everyone’s favorite pungent plant from legendary documentarian Les Blanc. The eleventh mother in my attempt at a health-boosting and generally protective mixed beverage is, what else, chicken soup, which my own mother termed “Jewish penicillin.” Like penicillin, I definitely wouldn’t recommend this drink for defeating viruses but since it’s just a mutated dirty martini, it can certainly help you to relax and worry a bit less about the bugs. So, enjoy this responsibly — and right now that means at home.

Combine all of the ingredients except for the olives in a cocktail shaker and or mixing glass with lots of ice and stir vigorously. Strain into a chilled cocktail glass and add the garlic-stuffed olives. Take a moment to thank the universe for the fact that we mammals have the capacity to nurture each other even when we’re separated.

11 Mothers started as a vodka-based drink. Ethnically speaking, it just made more sense to go Russian or Polish than with London dry gin and I’ve had a bad history with gin-based dirty martinis. Still, everything with my huge bottle of Stolichnaya came out unbalanced and unpleasant. Not savory but just a cacophony of surprisingly bitter flavors with the chicken broth and garlic olive brine simply refusing to cooperate. Switching to Bombay Sapphire Gin gave it a far better base that started feeling legitimate. It wasn’t until I ran out of Bombay, though, that I came up with the idea that makes the thing come together: the very mild Benz’s horseradish with beets that was keep the gefilte fish company in my fridge. The small amount of heat from the horseradish and sweetness of the beets brought the whole meshugas together.

Now, I have to caution here that — as always seems to be the case with these kinds of savory cocktails — this is not a drink that everybody is going to love. On the other hand, if you’re not shuddering as you read this, you might want to give it a try.

As for booze brands I stuck with Martini vermouth and I mainly used Beefeater as my base spirit. That was good to my taste buds but the best version by far used value-priced Gordon’s gin. I’m thinking that using somewhat fewer botanicals than the fancier brands made for a better-balanced drink. As my mother taught me, more expensive is not always better.