Trending
You are at:Home»Vices»Drink of the Week: The Dirty Gibson 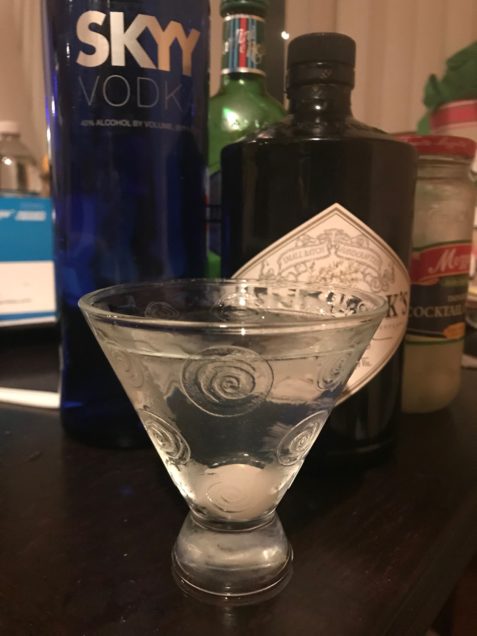 Before sitting down to work on this post, I had wrongly assumed that I’d already covered the Gibson here at DOTW. It really is a legit cocktail classic with it’s share of cultural heft and several creation myths. I guess I’ve only mentioned it in passing because, for all intents and purposes, it’s really just a martini. The only difference is that the Gibson comes with a pickled onion, instead of an olive or a lemon twist.

As for this week’s variation, the better known Dirty Martini has always been, as you’d expect, a relatively disreputable though often tasty blacksheep brother of the original, using olive brine alongside or instead of dry vermouth. The Dirty Gibson, which uses onion brine instead of the usual olive marinade, is not only unsung, it has a Google problem. The only relevant entry that comes up is from the notorious Urban Dictionary where it was briefly described by someone going by the classy moniker of DrinkDrankStank.

I don’t care. If you do it right, the Dirty Gibson can be refreshingly savory route to a pretty quick buzz or a surprisingly elegant aperitif that  just may impress a randomly selected cocktail snob — or me, anyway.

Combine the liquids in a mixing glass or cocktail shaker with lots of ice. Shake or stir as you like — I shake with vodka and stir with gin. Strain into a chilled cocktail glass and consider all things Gibson: Debbie, Henry, Don, and the guitar.

*****
I’ve never had any luck using gin in a Dirty Martini. Say what you will about Russia’s second most dangerous export, sometimes you just want a nice clean spirit, and I’ve found the herbal flavors in gin clash pretty badly with olive brine. I figured the same would be true with a Dirty Gibson, and so I started with vodka. It took me some time to find the perfect proportion. When I finally did, I was really liking what I had and I was tempted to leave things there with Smirnoff and Skyy, an old favorite, both producing equally good results. (Conforming to the cocktailian dogma that one decent vodka isn’t much different from another.) I should add that you really want to use a better than average cocktail onion brand for this one. Mozetta worked beautifully for me.

While I was happy with my vodka Dirty Gibson, I felt that I kind of owed it to you guys to gin a chance. I was actually out of the standard London dry gins I usually lead with, so I went with the cucumber infused Hendrick’s I had on hand. With the popular Scottish gin it was a less briny, more harmonious drink where a dozen herbal, vegetal, and savory flavors peacefully coexisted. The slightly less dry flavor of Plymouth was less of a home run, but it was definitely better than I would have expected. I then felt like I needed to try it with a legit London dry, and I ran out and bought a bottle of Ford’s Gin. Just slightly less amazing than the Hendrick’s iteration.