Trending
You are at:Home»Vices»Drink of the Week: The Genever Manhattan 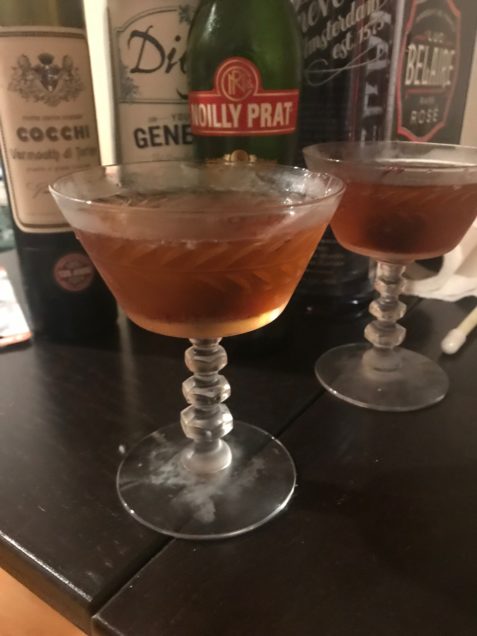 Following on my experiments with genever on two separate Million Dollar Cocktails, and after doing a genever Old Fashioned some time back, I have now stumbled over/stolen the idea  of doing a genever Manhattan. Since the whiskey-based Manhattan and the sweet ancestors of the modern day gin-based Martini are already very close relatives, the idea seemed like a natural. Genever is kind of halfway between modern-day dry gins and whiskey as it is.

There’s not much more to say about this. It’s a drink I found in a number of places and which all had pretty much the same recipe. I’m not feeling like rocking the boat this week, so mine will be the same.

Combine the liquid ingredients in a cocktail shaker or mixing glass. Stir vigorously or shake, based on your preference, and strain into a chilled cocktail glass. Consider the fact that genever comes from the Netherlands and part of modern day Manhattan was once called New Amsterdam by Dutch settlers. Figure out what to do with that fact.

I tried this with both Bols and Diep 9 young genevers. While both are aged for about the same length of time, Bols has considerably maltier, more mellow flavor despite being considerably higher in alcohol content compared to the underproof Diep. As for sweet vermouth, I went with Noilly Pratt, Cocchi di Torino, and Punt e Mes, which is almost as much bitter as sweet.

I like this drink. It’s sweet and punchy, but I have to admit that, at least the way I made it, the flavor of the vermouth definitely called the shots. Perhaps my weakest cocktail was the Punt e Mes, which might be bitter enough to justify leaving out any additional bitters. The Cocchi was fine but bordered on being excessively syrupy. (My in-house guinea pig issued the two words most dreaded by any home cocktail maker…”cough medicine.”) The prize went to good old Noilly Pratt. It’s lighter flavor just made the whole thing less serious, which is good for this drink. Not bad considering NP sells for about half the price of the other brands.