Trending
You are at:Home»Vices»Drink of the Week: The Million Dollar Cocktail (redux) 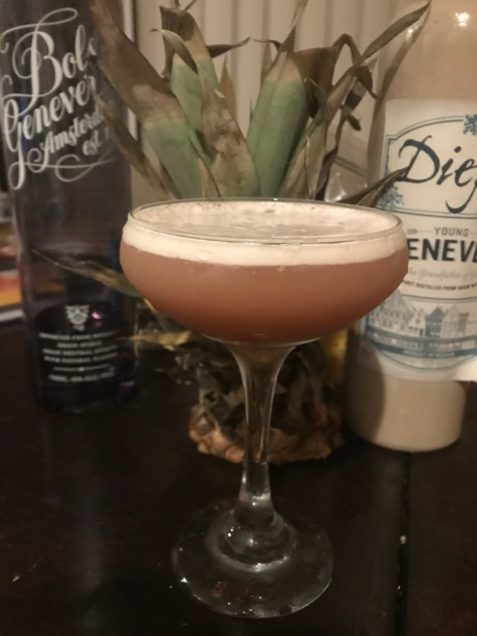 Last week, I provided you with the version of the Million Dollar Cocktail that appears in The Savoy Cocktail Book from 1930, though the drink itself is much older. As I said last week, it’s a fine drink if you stick with Plymouth Gin, not just a brand but a once common style of gin which disappeared until near the end of the last century. Today, we go back to a very recent variation on the cocktail which nevertheless calls for a style of gin that goes back to the Renaissance.

Plymouth gin legally must be made in Plymouth, England; genever, which has sometimes gone by the handle of jenever or Holland gin, can only be made in the Netherlands, Belgium, and certain select regions of Germany and France, by order of the EU. As discussed here on two occasions in 2016, it’s impossible to confuse genever with its now ubiquitous descendant, London dry gin. The flavor is sweeter and more complex — almost halfway between gin and whiskey, and it’s something you can actually drink neat, if that’s your thing. The main difference is that London dry is made from neutral spirits (vodka, practically) which are then re-distilled with juniper and other botanicals. Genever starts with a presumably much more flavorful malt spirit and then the juniper, etc. enter the picture.

Our redux Million Dollar Cocktail was featured in a December 2016 post in Imbibe, crediting Dallas bartender George Kaiho. It brings a sweeter taste that’s just a hair tiki, but also unusually refreshing. This is a really pleasurable, mass appeal drink that you don’t have to be a cocktailian to love.

Combine the ingredients in a cocktail shaker without ice and shake with relative gentleness. (This isn’t mandatory if you’re using packaged egg white, but it may still be advisable.) Add ice and shake again, this time very vigorously. Strain into a chilled, large cocktail class. Sip and contemplate humanity’s endless ingenuity in figuring new and more interesting ways to get a pleasant buzz.

****
Bols Genever, a brand that goes back to the Elizabethan era, remains the primary genever expression that you can find in big box liquor stores here in Los Angeles and probably in most other major cities with similarly liberal liquor laws. Fortunately, the excellent some of the better chains also offers what appears to be Bols primary competitor in terms of quality and acclaim, Diep 9. Being a cheapskate, I went with the somewhat less expensive young genever. Both products are very good, but I have to lean towards the Bols which has richer, maltier flavor at a fairly smooth 84 proof, a little less alcoholic than most of your better London drys, but potent enough. Diep 9 has slightly more burn to it, presumably because of its youth. The interesting thing is that it’s only 70 proof, which is rare in American spirits, but I understand fairly common in Western Europe.

Honestly, both genevers worked great in the Million Dollar Cocktail, but the Diep 9 resided into the background slightly more than Bols, despite the youthful burn. But, since Cherry Herring has no real competitor, it’s really your choice of pineapple juice that makes the biggest difference. This was the week that I finally got over my lifelong trepidation about removing the skin off of pineapples, so I mostly used fresh juice. It’s definitely better that way, but I’m also happy to say that you can use Dole’s canned juice and the Kaiho Million Dollar Cocktail will still be worth a good $10.00.