Trending
You are at:Home»Vices»Drink of the Week: The Coolidge Cooler 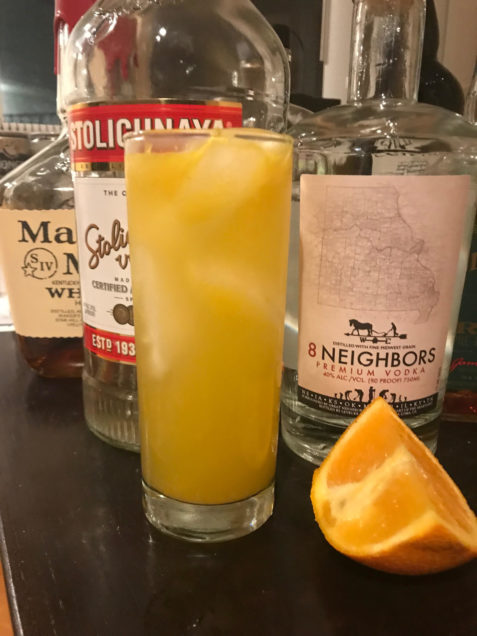 Staying with my historical theme from last week, I found the Coolidge Cooler in a seemingly exhaustive 2014 New York Post article claiming to cover the favorite beverages of every US president up to that point. I have no idea what the writer’s sources were, but the article offered some decent observations. It also reminded me that it looks as if we’ve only had two teetotaling commander in chiefs: Honest Abe Lincoln and — as the Post writer was blissfully unaware four years back — our current orange-hued POTUS.

For some reason, it took me until just now to realize that the drink wasn’t created during the first half of the last century to honor Coolidge, but much more recently. The artisanal distiller behind it probably didn’t exist at any point during President Coolidge’s administration when, as I very well know, vodka was all but unknown in North America. Indeed, this drink was likely written sometime in the last decade or so for probably the strangest vodka I’ve heard of yet. Vermont Spirits White Vodka is not made using wheat, potatoes, or even rice, but dairy whey. The sweet stuff in milk. I gather that the milk sugar may impart a lingering sweetness to the most flavorless of all hard liquors, but I’d like to think Vermont Spirits created it mostly to annoy vegans. In any case, you can’t find the stuff down here in the land of LA, so I had to make due with conventional plant-based vodka.

Anyhow, my drink for this week might be named for one of our lesser presidents, but is really kind of ideal for this notably hot week in much of America. Give it a try.

Build in a Collins/highball glass, starting with the juice, spirits, and falernum — a very sweet vanilla-Christmas-tasting liqueur often featured in tiki drinks. Next, add plenty of ice and chilled, carbonated water of some sort. Stir, sip, and think about not very much, because no one has a whole lot to say about Calvin Coolidge, except that he didn’t talk much, and maybe he could helped to prevent the Great Depression but didn’t.

I tried the Coolidge Cooler with Stolichnaya and, wanting to keep up the U.S. of A in the mix while we’re still a separate nation, 8 Neighbors Vodka. It’s a Midwestern-made brand that I’m guessing is new to Southern California stores because I don’t remember ever seeing it, and because they’re selling it for the absurdly low price of $11 or so at my neighborhood Ralph’s (Kroger). Anyhow, it’s an excellent buy, especially since I don’t see the point of spending too much money on vodka, which tends to taste better the less it tastes like anything.

My bourbon whiskies were Maker’s Mark , Evan Williams White in Bond, and my ryes were Bulleit and Jim Beam. They all added something but I sort of leaned towards the more pricey Maker’s and Bulleit. I have a suspicion almost any whiskey would work and I partially confirmed that by making one with Cutty Sark Prohibition Scotch, which was pretty good.

In any case, as you might suspect given that it’s the largest ingredient with any flavor to speak of, the orange juice was really the key, I started by juicing a relatively tart Valencia orange, but moving on to some of the delicious navel oranges we’re lucky to have right now in Cali, the drink became even more fun and refreshing. Also, sorry, you really do have to use fresh squeezed OJ if you want this one to be half-way drinkable. I bought a “not from concentrate” product that actually tastes just fine on its own. However, in the drink, it was bitterly astringent and, to use a technical term of the mixological trade, nasty.