Trending
You are at:Home»Vices»Drink of the Week: The Hamilton 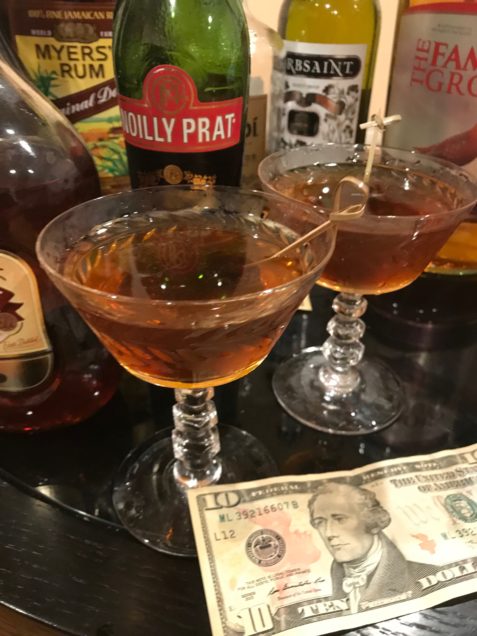 It’s going to be July 4th, 2018 next Wednesday. It’s clearly time for us to ask not what our holiday can do for us, but to ask how we can make that holiday a bit more meaningful.  As I write this, I think it’s clear to people across the spectrum that things are happening — very bad things in this drinker’s opinion — that kind of go to the core of what this country is all about. A drink named for treasury secretary Alexander Hamilton, whom musical theater super-whiz Lin-Manuel Miranda and author Ron Chernow have turned into founding father with the highest Q score, seems just right.

You see, along with the events of this crazy and crazy-making week, I have “Hamilton” on the brain. It’s still ringing in my ears weeks after seeing the show in Las Vegas at the Smith Center for the Performing Arts downtown.  Yes, its a great show in every conceivable way – so good that I really didn’t begrudge spending more for a single ticket than it cost me to stay three nights at one of the nicer hotels near Fremont Street. Aside from its jaw-dropping libretto and score — the first Broadway score I’ve loved since maybe the 1990s — it’s a show about sticking up for your beliefs, taking chances, winning, and then losing everything after choosing principle over political faction. Seems relevant to me.

So, before or after we watch fireworks, eat too much, and maybe watch a patriotic movie on the idiot box, how about a highly diverse cocktail to build up your strength for the coming drama?

Combine the Scotch, rum, vermouth, bitters, and allspice dram — a heady, clove-heavy West Indian “tastes like Christmas” liqueur — in a cocktail shaker or mixing glass with lots of ice. Next, take a chilled cocktail glass and toss in a very small amount of your anise liqueur. Make sure the glass is coated with it, then dump the remains. Next, add plenty of ice to your vessel, shake or stir vigorously, and strain into your chilled and coated cocktail glass. Sip and contemplate the many peoples and beliefs that makes up the United States — or just drink. It’s possible I’m laying too big a trip on you.

This version of the Hamilton is adapted from a recipe I found on Kindred Cocktails and should not be confused with the Founder’s Fizz that was reportedly being served during intermission on Broadway last year and was endorsed by Mr. Miranda. As you might guess, this drink covers Hamilton’s European/Scottish ancestry and his West Indian beginnings. There are some additional Hamilton-inspired cocktails floating around, and at least one sounds tasty enough to try later, but this is one I went with. I have no idea who created it, but clearly the person spent some time on it. The many ingredients all add up to something.

It’s a solid recipe. While the original was extremely specific about brands, I found this drink was a winner with most of what I tried. I only had one kind of allspice dram, but my Scotches were the Famous Grouse and Cutty Sark Prohibition — a rich tasting spirit that is the first 100 proof Scotch I’ve encountered. My rums were Bacardi 8, Flor de Cana, Appleton Estate and, taking a risk with a stronger molasses flavor, Meyer’s Dark. The sweet vermouths were my usual Noilly Pratt and Carpano Antica. I used both my generic Absinthe Ordinaire and Herbsaint to coat the glass, with some subtle differences in the final drink resulting. I was lucky to find any brand at all of allspice dram, and mine was St. Elizabeth. Considering the number of ingredients, you could make a Hamilton every night for months and always get something a little bit different and they’d mostly be okay.

One note, though. Please don’t do what I did a couple of times and forget the bitters. The cardamon-forward flavor of both Peychaud’s and, the somewhat more exotic tasting Scrappy’s New Orleans bitters I used knitted the whole crazy patchwork together and covered all the rough edges. Sad that no single ingredient is going to do that for our country.

My advice is to have a good time on the 4th and stay hopeful. Some might make fun of you, but know, that doing almost anything worthwhile risks looking ridiculous.