Trending
You are at:Home»Vices»Drink of the Week: The Apple Jack Cocktail 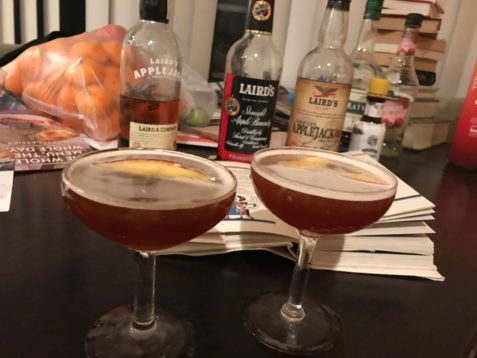 Back in mid-December, I explored a recipe I  found online named the Applejack Cocktail. It was sort of a mixed bag, but good enough to reconsider. I said I’d return the following week with another cocktail of (almost) the same name. However, I suddenly remembered it was the holidays and so I did something different for the next few weeks. Now, with Santa gone back to Palm Springs and playing golf with the Easter Bunny, the Tooth Fairy, and the Republican Party’s integrity, it’s time to return to this column’s regular business — making really old cocktails no one’s heard of!

The drink calling itself the Apple Jack Cocktail can be found in 1930’s “The Savoy Cocktail Book” — and not many other places! It’s a sweeter turn on an apple brandy Manhattan, and it’s something I think a lot of you would enjoy. I also just realized as I was writing that this is not exactly a case of two somewhat different cocktails having exactly the same name. Not quite. Note that all important space between the words “apple” and “jack.” Nomenclature aside, I thought it was nifty, and it’s definitely not hard to make, as long as you’ve got the ingredients.

Combine the apple brandy, vermouth, and bitters in a cocktail shaker or, if you must, a mixing glass. Add plenty of ice and vigorously shake or stir — I think shaking is better for this drink — and strain into a chilled cocktail glass.

With two ingredients in equal parts, it probably shouldn’t be a surprise that your selection of those two ingredients is going to be important to the quality of the drink. Finding the right combination is, I think, the key to making the Apple Jack Cocktail work as it should.

My apple brandiess were Calvados Coquerel and three products brought us by Laird’s, a company just a few years younger than our nation that famously shared its original applejack recipe with just one individual, George Washington. These are the 100 proof Laird’ Straight Apple Brandy, their Straight Applejack 86 (a new/old product which presumably is closer to that original recipe), and their 80 proof Applejack. Apart from the percentage of alcohol, the main difference between these liquors is that the first two are all apple brandy and nothing but, while the Applejack — the product you’re most likely to have seen at your local bar — is actually a blend of apple brandy and neutral spirits. My sweet vermouths were Noilly Pratt and Carpano Antica.

The trick to getting the right combination is to sort of balance out the flavors. For example, the mild flavor of the AppleJack blended near perfectly with the stronger, bolder, more bitter flavor of the Carpano. On the other hand, by far the worst of my attempts was Applejack and the sweeter, lighter Noilly Pratt, which was insipid and kind of medicinal in flavor. The more flavorful , but still fairly light and relatively dry, calvados (i.e., French apple brandy) blended well with both vermouths. However, as much as I love Carpano and don’t mind paying a lot extra for it, the good but much cheaper NP went better with both the Straight Applejack 86 and it’s 100 proof bonded younger/older brother.  While there is definitely more sweetness in the straight Laird’s products, they are also a great deal fiercer and seem to require the extra smoothness and sweetness provided by my second favorite sweet vermouth.

Finally, a couple of quick words about the very minor changes I made to Harry Craddock’s original recipe. For whatever reason — perhaps because the Savoy was a lot closer to France than Pennsylvania — Craddock specifically calls for calvados. Nothing wrong with that, but the Apple Jack Cocktail just seems like it should have actual applejack in it. Also, the garnishes are my idea. Adding a bit of additional fruitiness to this drink just makes sense.