Trending
You are at:Home»Vices»Drink of the Week: The Applejack Cocktail (The Internet Version) 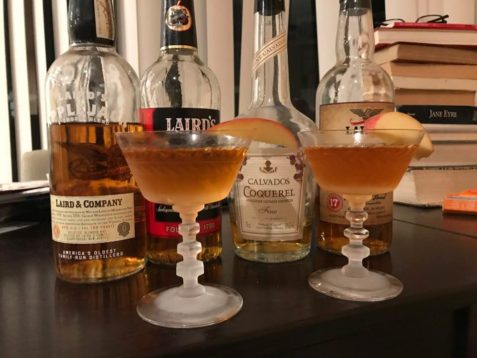 There’s a sort of subgenre of cocktail that names itself for a widely used base spirit or predominant ingredient. Offhand, I can think of the Bacardi Cocktail, and the Champagne Cocktail. I’m sure there must be others.

The Applejack Cocktail, which I stumbled over online, is definitely one of them. I’m kind of obsessed with apple brandy these days, and this drink was seductively simple to make but, I have to say, most versions of it simply didn’t come together…though I got close enough for rock and roll a few times. However, take heart, for there is another. We’ll look into that one next  week. And then, I think, I’ll be revisiting something else with apple brandy a lot more tried and true. After that, I might be plumb out of bottles of the stuff, and you can see how many I have.

Combine the liquid ingredients in a cocktail shaker or mixing glass, and then shake or stir as you prefer. I suggest shaking. Strain into chilled cocktail glass, and toast Adam, Eve, and Johnny Appleseed for helping to popularize this most basic and tasty of all fruits.

I spent a great deal of time trying to perfect the Applejack Cocktail but, while some versions were more than tolerable, I never quite hit the mark. Still, if this sounds good to you, and you’ve apple brandy or Applejack around your place, I would encourage you to give this one a try. Maybe you’ll figure out the perfect combo.

By far the best Applejack Cocktails I made were using Pierre Ferrand Dry Curacao in combination with 100 proof Laird’s Straight Apple Brandy, 80 proof Calvados Coquerel, or Laird’s Straight Applejack 86 — a new product I’m pretty much in love with. It’s not as mannered and more approachable than it’s 100 proof cousin or calvados. On the other hand, it’s got significantly more flavor and character than Laird’s Applejack, a decent approximation that’s can’t be called an apple brandy because it’s been blended with neutral spirits. At it’s best this was a hard edged, sophisticated cocktail, and that was the version, ironically, with calvados, so maybe this should really the Calvados Cocktail.

I had much less luck substituting the high end Pierre Ferrand with the more standard Hiram Walker orange curacao. It’s much sweeter but fairly tasty on its own. However, when combined with the apple brandies, it was sickly sweet. A cut-rate iteration, with Laird’s non-brandy Applejack, was declared by my in-house guinea pig to be in the cough syrup family of flavors, and I really couldn’t argue. I had slightly better luck when I cut the serving to 1/4 of an ounce.

P.S. This isn’t “Fruit of the Week” but I have to give a shout out to my choice of garnish this week. Pacific Rose is a new variety of apple that combines Gala and Splendor (don’t think I’ve had one). If it’s available in your local grocery, I’d definitely give it a try if a sweet, crispy/juicy apple is your thing. This is one week where the garnish kind of outshone the drink.