Trending
You are at:Home»Vices»Drink of the Week: The Byrrh Cocktail 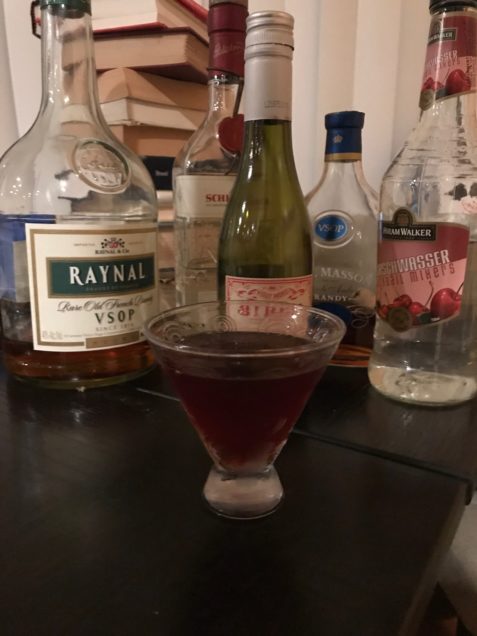 Byrrh was discussed a little in my final post of 2017, but it’s also going to figure in my first post of 2018. So, to answer your first question, byrrh is pronounced “beer.” Yeah, I know. “Who’s beer/byyrh is on first?” In Europe, products like Byrrh Grand Quinquina — the only  brand widely available in the States — are typically consumed on the rocks and maybe with soda, but we Americans like to mess with things.

Today’s drink might be American in style, but it’s pedigree is mostly European. The Byrrh Cocktail, which I found via The Washington Post  and elsewhere, was featured in a 1936 book, “The Artistry of Mixing Drinks” written by legendary barman Frank Meier of the Bar Hemingway in Paris. A mysterious Austrian of partially Jewish ancestry, Meier is also notable for some World War II skulduggery on behalf of the Allies, although he apparently wasn’t above a little embezzlement on the side.

Whatever his sins or acts of bravery, Meier’s clearly knew his way around a mixed drink. This one’s pretty great and about as easy to make as you could hope for.

Combine the ingredients in a cocktail shaker or mixing glass with plenty of ice. Shake or stir as your prefer — either way is good — and strain into a chilled cocktail glass.

I really think the Byrrh Cocktail might just be the best way to enjoy the eponymous aromatized wine, which I personally find a bit cloying on its own. Adding the boozy but elegant brandy and the oh-so-spiky unaged cherry brandy that is kirsh or kirschwasser is a pretty good example of the magic of cocktails. Sweet but complex, with a tantalizing sharp edge.

As for brands, I found that using the slightly downmarket Paul Masson VSOP brandy was practically just a good as using the drier and classier Reynal, still my default mixing brandy. (I think it’s better than a lot of Cognacs out there.) In fact, in some ways the flavor was richer and more full bodies with the cheap Masson, though I still prefer the Reynal in this.

On the other hand, even at only a quarter ounce, your choice of Kirsch may be crucial. My pretty darn expensive (and worth it) bottle of Schladerer Kirschwasser added just the right kind of sharp edge to the beverage. On the other hand, my relatively very cheap bottle of Hiram Walker Kirsch (“imitation cherry brandy” but just fine in certain cocktails) offered a bit of spike, but also a touch of turpentine.

Finally, there’s another classic drink also called the Byrrh Cocktail. My bottle of byrrh has run out, so you’ve been spared another one of my trilogies.