Trending
You are at:Home»Vices»Drink of the Week: Right to the Bitter End 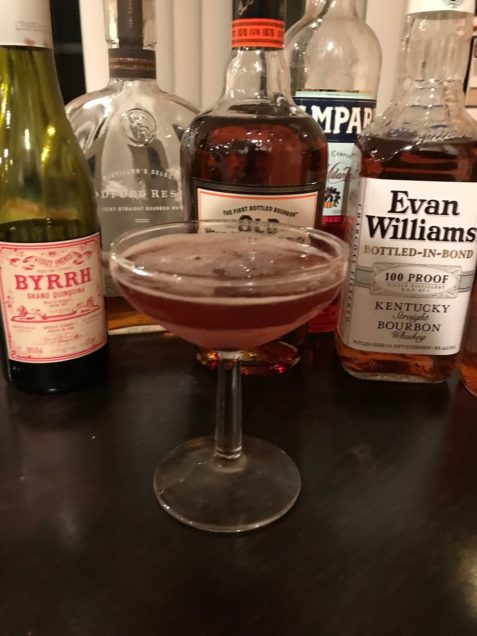 In about two and half days, 2017 will be, literally, history. Trust me when I say that I’m convinced it could have been much, much worse. (We Americans have no idea how bad things can get when make the worst person in the kingdom the king.)

Even so, it’s pretty clear that 2017 was not actually a good year or one many of us will be unhappy to see the back of. So, when I started looking for New Years-appropriate cocktails in which I could use my bottle of Byrrh Grand Quinquina, a revival of a long lost, quinine spiked, aromatized wine I had purchased almost by accident, Right to the Bitter End seemed an extremely apt choice.

Kindred Cocktails tells us this cocktail was created as part of a salute to the first 2012 presidential debate, the one that an off-his-game Barack Obama saw right through to the bitter end. It’s a drink that, on the first sip, might seem terrifyingly sweet as well as bitter. However, as your taste buds adjust, you start to acclimate and give in. Sometimes there’s no fighting the bitter sweetness.

Right to the Bitter End

Combine all the ingredients except the cherry in a cocktail shaker or mixing glass, and shake or stir as you prefer. (I lean mildly towards shaking.) Strain into a chilled cocktail glass and add the cherry. You can also shake/stir and pour over an ice-filled rocks glass. Contemplate what sweet things would taste like if there was no bitterness.

Especially if you’re making it with one of the many high proof bourbons out there, this is a very sturdy drink, and that’s what I did. My base spirits were Woodford (a paltry 90.4 proof), Old Forester Signature 100 proof, Evan Williams Bottled in Bond 100 Proof, and Fighting Cock (103 proof!). All were more than acceptable, but my favorite was the boldly sweet, extra boozy one named after the pugilistic male chicken…that extra 1.5 percent of alcohol plus some additional sweetness somehow just pushed it over the edge. Second prize goes to the Evan Williams iteration, possibly because, converselh, it’s relative dryness helped balance it out.

As for my byrrh, pretty much the only one you’re likely to find right now seems to be Byrrh Grand Quinquina. As a fan of the whole aromatized genre, I’m surprised to say that, on its own, this stuff doesn’t float my boat — but since Right to the Bitter End worked out okay, I’m willing to try something else with it.