Trending
You are at:Home»Vices»Drink of the Week: World Peace 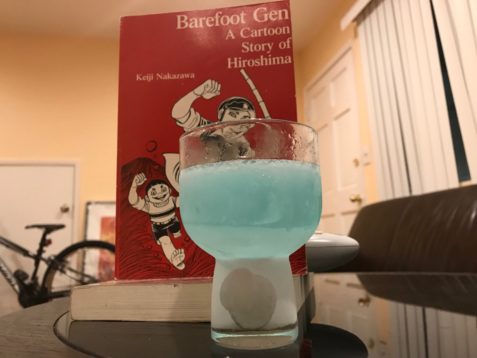 Last week this cocktaill blog took one of it’s not so unusual political turns, but harder than usual, which I know is weird. On the other hand, drinking is a part of life and so is politics. Indeed, it’s possible to stay out of drinking but politics will get you, whatever you do. And the most salient kind of politics are those of war and peace.

We who are lucky enough to live in peaceful surroundings where sudden death, hunger, and thirst, rarely enters the picture don’t really appreciate what we’ve got. When a certain non-entity asked us “What the hell do you have to lose?,” my immediate answer was “everything.” Life is hard but, if you’re reading this, you’ve likely got it pretty easy compared to much of the world’s population. It can always get worse. Just ask a Syrian.

So, we need to cherish peace, do whatever we can to protect it, and maybe even drink to it. Today we have my adaptation of a beverage concocted by New York bartender Jonathan Pogash of the World Bar, which is across the street from the United Nations.

The original version of the drink called World Peace sounds incredibly  tart — and it comes with a white chocolate dove, which I really think you should reserve for after finishing this drink. My version eschews the white chocolate and boosts the sweeter ingredients from mere drops to an entire fraction of a teaspoon. It’s still pretty restrained and, actually, kind of peaceful in a lemony sour/refreshing way. Mr. Pogash reportedly was giving 15% of the proceeds to fund UN peacekeeping. If you’re feeling charitable, I’ve always been a fan of UNICEF, which helps endangered children around the world, Isn’t that what world peace is largely about?

Combine the ingredients in a cocktail shaker with lots of ice. Shake vigorously, though peacefully, for a at least 10 seconds, maybe 15 or longer, and strain into a well chilled out cocktail glass. Sip and think about how wonderful and fragile is this thing we call civilization.

Jonathan Pogash’s original recipe calls specifically for Bombay Sapphire and only asks for drops and splashes of the sweeter ingredients. It also calls for elderflower syrup, not elderflower liqueur. However, since I had St. Germain around and was not even aware that elderflower syrup was something you could buy. Also, since I’m not super-duper into super-duper tart drinks, I decided to boost the liqueurs and syrups up to an entire quarter teaspoon.

The result was much easier sipping than I expected. Oddly enough, when I doubled up to an entire half teaspoon , I was repulsed. This drink really does rebel at too much sweetness. It’s possible, in fact, that the original version was better but, since I had several types of gin in the house, but no Bombay Sapphire, I might not ever find out. Instead, I tried this drink with Plymouth Gin, Tanqueray, Gordon’s and Genever. None were bad but my favorites were the ones with the less dry gins. Plymouth — which is far from being sweet but still, not quite as dry as the London style — worked very nicely. My favorite, however, was Bols Genever. Genever is a more malty, whiskey like ur-gin. For the record, my orgeat (just a fancy sounding foreign name for almond syrup) was Torani and my blue curacao, which is in the drink for color as much as flavor, was plain old Hiram Walker.

And, yes, maybe it’s the power of suggestion, but there is something peaceful about the beverage. The very mild sweet notes amidst the more dominant tart, floral, and boozy flavors makes for a drink that’s both severe and enjoyable. A disciplined tipple.

Anyhow, if you’re curious about that manga behind this week’s drink in our photo,it’s an old edition of the first volume of Barefoot Gen. Read it, and you might appreciate why that  musical question about peace, love, and understanding is still so very much worth asking.