Trending
You are at:Home»Vices»Drink of the Week: Mr. President 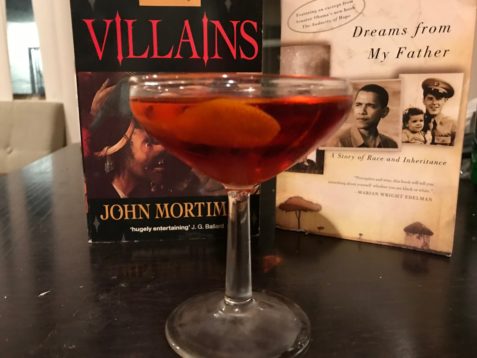 At this particular Friday the 13th, it might seem odd — distasteful or creepy even — to discuss a drink saluting an American president. Indeed, even though this is nothing  but a cocktail blog, I haven’t been super-shy about expressing my own liberal political convictions since I started doing this. However, since the election, it’s bled more into this column than I would have considered beforehand. It’s not because of who lost, but who won. Suffice it to say that we have a president who’s done more to drive decent and/or intelligent people to drink than any other  human being in my lifetime. I don’t hold the fact that he says he’s never had a drink against him. I do wonder, however, if we’d all be better off if he actually did. Maybe he’d be a mellow, friendly tippler like me. Probably not.

Which brings me to today’s cocktail, which I sincerely hope will be an unsobering reminder of how much better even presidents you might personally have strong disagreements with can be. It’s true that this recipe, which I found over at Difford’s guide, was, reportedly invented by famed UK mixologist Andy Pearson in honor of Barack Obama. I’m a fan and all, but I’m not sure what to say about that except that, even better than drinking, actually doing something to change the situation is the best solution to that sour feeling in the pit of your stomach. Or, as the former Mr. President put it…

When we write off the whole system as inevitably corrupt and when we sit back and blame the leaders we elect without examining our own role in electing them. It falls to each of us to be those anxious, jealous guardians of our democracy. To embrace the joyous task we’ve been given, to continually try to improve this great nation of ours. Because for all outward differences, we in fact all share the same proud title, the most important office in a democracy — citizen.

Being a citizen is an important responsibility you either ignore of you embrace. In either case, it’s can be stressful. And so we drink and hope — but more importantly work — for better days.

Combine the liquid ingredients in a shaker or mixing glass. Stir or shake and strain into a chilled cocktail glass, and then add the orange twist. Sip, and contemplate the bittersweet thoughts of better times behind us and, if we as a nation work hard enough, ahead as well.

*****
Okay, this is actually a mixed drink I’m writing about, and a very nice one at that. Mr. President was allegedly supposed to be a combination of a Negroni and an El Presidente. Actually, though, it’s closer to a Negroni with white rum substituted for gin, and it’s proportion increased.

As with a Negroni, this is a hard drink to mess up, though it can threaten to be a bit overly sweet. Even in a reduced amount, the Campari dominates and it’s not just the bitterest thing on the planet, it’s also the sweetest, which is why I love it. Mr. President really  saves itself, though by going light on the on the Campari and sweet vermouth, and goosing up the rum. That’s important, because — unlike the dry gin in a Negroni — the rum adds a little sweetness of it’s own,.

I tried this one with Noilly Pratt and Carpano Antica for vermouths and a long list of light rums that included Bacardi Maestro de Ron, Brugal Especial Extra Dry, Myer’s, Selveray and Shellback. Overall, I leaned almost imperceptibly in the direction of Noilly Pratt for the vermouths, the simpler flavor just seemed to blend in more nicely. As for the rums, none were bad and most were pretty dandy. Personally, I think my favorite was the Brugal Extra Dry, which helps to tamp down the sweetness, although it’s still got some nice vanilla notes. Speaking of vanilla notes, they kind of dominate Shellback, and I couldn’t decide quite how I felt about them in the context of Mr. President. My in-house guinea pig very much approved that iteration of the drink, however.

That brings us to the end of another DOTW. I’ll leave you with a musical plea from Mr. Randy Newman that actually refers to President Herbert Hoover. He was a decent person by most accounts and a very generous philanthropist as a private individual, but his tight fiscal policies were not exactly what the doctor ordered during the depression and a more imaginative and progressive president was needed. He was also an avid prohibitionist. So, an okay guy but maybe not the most fun person at parties.

Nevertheless, I believe this tune can definitely be applied to our current venomous albatross. However, as regarding who the president should take some pity on, along with working people, I’d throw in everyone who isn’t white (even NFL players) and, especially, I’d throw in some pity for the innocent people of both Koreas, Japan, Guam, and maybe even Hawaii [Update: I guess we have to throw in the highly cultured and generally cool people of Iran as well now; most of them don’t like the mullahs anymore than most of us approve of Trump. Do we deserve to be bombed?]. Pray with me and Randy now.