Trending
You are at:Home»Vices»Drink of the Week: The Orange Blossom 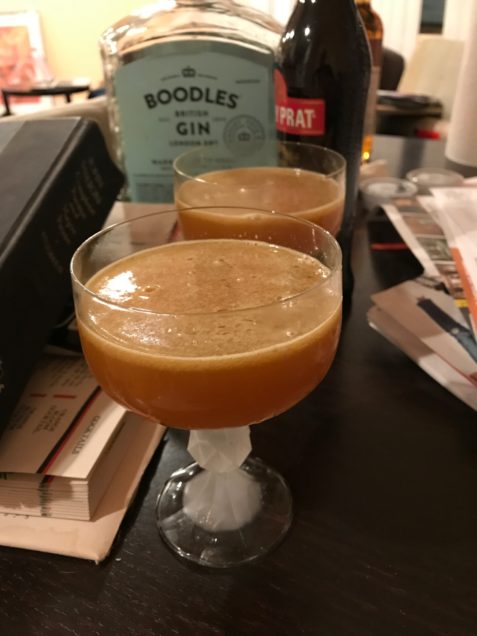 As I mentioned last week, the Orange Blossom Cocktail is something I stumbled upon while trying to research the much more obscure Orange Bloom Cocktail. Though both drinks have many things in common — being equal parts gin, sweet vermouth, and a sweet orange flavored liquid (Cointreau in the latter, the original orange beverage in the  former), and they’re both very good, today’s drink is lighter and probably more of a mass appeal beverage that’s likely to go down well with non-cocktail snobs, while in no way being offensive to cocktailians. At least, I have a hard imagining anyone dissing this completely. On the other hand, as a prohibition era drink presumably designed to mostly hide the flavor of doubtful gins, it’s never likely to be admitted to the pantheon of great drinks, but that adds to its appeal. This beverage isn’t trying to impress you with it’s boozy complexity, it’s just good.

Cocktailian god David Wondrich explored an alternate version of the Orange Blossom in depth a decade ago. Since he admits to not much caring for his ultra-simplified version of the drink, I”m not sure why he didn’t go for this reportedly older version instead. If you read his whole take, right down to the humorous conclusion, you’ll learn that Snoop Dogg, prophylactics, and bubonic chronic are somehow in the mix. Wondrich’s opinion notwithstanding, our drink of the week is very tasty and fair to middling refreshing on a hot summer day. It’s also legal in all 50 states.
The Orange Blossom

Combine the ingredients in a cocktail shaker; shake vigorously, and pour into a chilled cocktail glass of a rather large size. (If you’ve only got smaller ones, just use 3/4 ounce or one ounce of each instead.) Sip and contemplate the beauty of the citrus fruits: oranges, lemons, limes and even grapefruits; scourge of scurvy and savior of so many mixed beverages.

I tried the Orange Blossom in a number of permutations with several different brands, and all turned out good to super-tasty. Boodles proved to be the sturdy go-to London dry it’s supposed to be and held up nicely on a few different tries. Gordons and Prairie Organic gin made for just dandy results. I got a bit experimental with Hendrick’s Gin, a favorite of mine I’m reacquainting myself with, and it added a very, very slight edge that I thought was just fine.

My choices of sweet vermouth were, however, more consequential to the ultimate result. Again this week, I have to give the edge the less expensive and less complex Noilly Pratt sweet vermouth over the more bittersweet, and more bitterly expensive, Carpano Antica. This is a drink that just wants to be a sweet and refreshing treat.