Trending
You are at:Home»Vices»Drink of the Week: Baltimore Eggnog 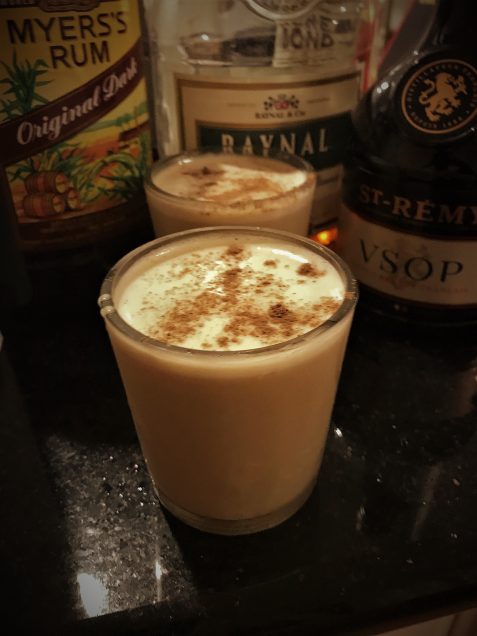 When I first started researching this here Merry Christmas DOTW edition, I found a recipe for something claiming to be Edgar Allen Poe’s eggnog. Sadly, I’ve found no evidence that the dark lord of American letters really had anything to do with the invention of today’s frosty delight. Indeed, while it’s clear that Baltimore Eggnog has over a century of history behind it, I’ve found little about its provenance or even whether people in Baltimore still drink this stuff. I hope they do as this is one of the better variations I’ve found on the deliciously simple eggnog template. The primary twist here is the presence of a dessert wine and, it turns out, a pretty particular one that isn’t always that easy to find.

Combine all of the liquid ingredients along with the whole egg in a cocktail shaker. Shake vigorously without ice for about 10 seconds to emulsify the egg. Next, add the ice and shake even more vigorously for as long as you can stand and strain the mixture into a chilled cocktail or old-fashioned/rocks glass. Sprinkle with nutmeg and/or cinnamon. Sip and be merry.

I started out using Savory & James Cream Sherry because, while most recipes specified Madeira, some also mentioned sherry and I was having a hard time finding the Portuguese dessert wine here in North Hollywood, CA. The results were disappointing. Eggnogs should always be sweet but this was a biting, gooey kind of sweetness I didn’t love and I was starting to wonder.

Fortunately, I was able to get hold of an inexpensive bottle of Vinho Full Rich Madeira and my Baltimore eggnog finally came together. I wish I could tell you why but I’m not very knowledgeable about wine, sweet or otherwise. All I can say is that it was substantially better. Maybe a little richer and more balanced…?

I can put my finger on the importance of your choice of dark or blackstrap rum – it’s all about how much molasses you want in your drink. Meyer’s Dark Rum is a cocktail standby that gets a lot of exercise at any tiki bar. Even so, its flavor is on the subtle side compared to Cruzan Black Strap Rum. Though it turns out that the use of the term “black strap” is a misnomer, it adds a notably richer, sweeter, spicier flavor to a Baltimore eggnog. Its darker hue also adds additional nut-brown, coffee-like coloring.

Using Reynal, my default French brandy, with Meyer’s Dark resulted in a pleasantly simple flavor which I think will delight many. I don’t know what it was in my 100 proof Sacred Bond brandy, however, that got in the way but both I and the in-house guinea pig agreed combining it with the standard dark rum made for far the flattest iteration of the Balto eggnog I tried. The very best beverage, however, used both the Cruzan Black Strap and my somewhat pricier/higher quality St. Remy VSOP. The edgy/fruity notes from the higher quality brandy and that strong molasses flavor made for an enjoyable spice-cookie flavor.

Finally, a word about high-fat dairy: use it.

Some Baltimore eggnog recipes allowed for a combination of homogenized milk and half-and-half in unusually large amounts. Those turned out like milk punch. Nothing wrong with that, but I’d rather taste the egg a little. Just an ounce of half-and-half will do you. It might work even better with heavy cream but you didn’t hear it from me.

I hope the Baltimore legend embedded below enjoyed his share of Baltimore eggnog. Be safe and merry out there.