Trending
You are at:Home»Vices»Drink of the Week: Tommy’s Margarita 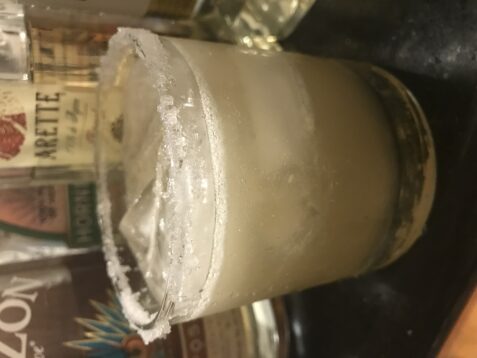 It’s a relative latecomer among classic cocktails but the standard margarita, as opposed to its insanely popular Slurpee-like variations, has as much clout these days as any respected member of the sour family of cocktails. If anything, it’s surpassed its cousin, the daiquiri, also a victim of slushization.

Tommy’s Margarita might be one of my favorite margarita variations yet for its clever sweet-and-sour simplicity. It comes to us from Tommy’s Mexican Restaurant in San Francisco – an institution I’ve somehow missed completely despite having spent a lot of time in the Bay Area.

Tommy’s Margarita drops the usual orange liqueur and replaces it with nothing more than agave – the stuff that tequila comes from. It also uses more mellow reposado tequila instead of the usual blanco.  I like it because it celebrates the piquant flavor of tequila instead of trying to hide it.

2 (or 2½ if you’re me) ounces reposado tequila
1 ounce fresh lime juice (lemon may be okay in a pinch)
½ ounce agave.
Salt (garnish, optional!)

Combine all of the non-garnish ingredients in a cocktail shaker with lots of ice. Shake very vigorously and strain into an old-fashioned glass with fresh ice. It might be better if the glass is pre-chilled and if it’s rimmed with salt – but that’s your choice. I find a salt rim nearly essential for most margaritas but I think Tommy’s Margarita works almost as well without.

This is a drink that doesn’t require a premium base spirit but that’s not the same thing as saying your selection of a reposado tequila has no impact. Good value brands like Hornitos and el Jimador have their edges very nicely sanded off by the lime and agave, and their slight roughness doesn’t hurt the drink. You can make the drink even better, however.

For just a few dollars more, Corazon’s reposado expression was a treat. It’s nearly as sweet as bourbon and I’ve been having fun using it for old fashioneds. Maybe because of the stronger agave flavor, Corazon is not cloying in Tommy’s Margarita, just delicious. The class of my reposado collection, Arrette, proved worth more than every penny of its almost-too-cheap price. It was a smoother but far from insipid kind of sweet — if that makes any sense at all.

Brands aside, the Tommy’s Margaritas I liked best were achieved by simply bumping up the booze by half-an-ounce, which won’t be everyone’s preference and which I admit isn’t essential. If you’re a long-timer in this cocktailian thing, though, I think you’ll prefer it that way.