Trending
You are at:Home»Vices»Drink of the Week: And to All a Good Night. 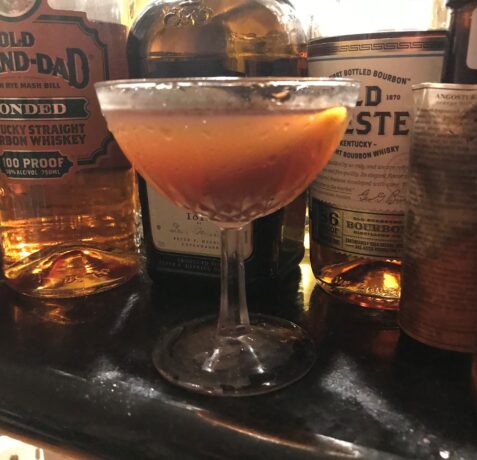 Merry Christmas – if you’re reading this on Xmas Day. Otherwise, still be happy! You’re alive and able to read this.

And to All a Good Night appeared in a 2009 edition of Imbibe. It is credited to San Francisco bartender and proprietor Tim Stookey, now of  Stookey’s Club Moderne, which looks like it will be a cool place to hang when hanging becomes safe again. Our drink this week is intended as a festive or possibly post-festive after-dinner drink for grownups. It’s sweet, rich, and boozy flavor seems to bolster that claim though I’ve been drinking it before dinner and it’s done me no harm.  It’s a member of the very small club of cocktails featuring two base spirits — and an unusual pairing of boozes at that. How you make that pairing will be important.

And to All a Good Night

Combine all liquid ingredients in a cocktail shaker or mixing glass with plenty of ice. Stir vigorously, or less so, to taste. (I stirred vigorously.)  Strain either into our usual chilled cocktail glass or, you can do as Tim Stookey suggested and strain it into two smaller chilled cordial glasses. It’s strong stuff so Stookey’s suggestion has merit. I nevertheless went whole hog.

When I started working on this drink I had almost no bourbon left in the house – a shocking state of affairs at DOTW Manor! After some searching, I also was under the mistaken impression that I didn’t have any reposado tequila bottles left. I had two – I’m not so good at searching! In my ignorance, I bought four , yes four, more bottles of tequila. Expect lots of tequila-based cocktails to come!

My new bourbon bottles that seemed to work the best were among the mellower but more complex variety. Very reasonably priced Evan Williams 1783 and premium standard Buffalo Trace were pretty awesome. Value-priced Old Forester 86 brought just a bit less fun to the party along with a slightly lower alcohol content but it’s fine stuff for the $. Old Grand-Dad Bonded, which is 100 proof by law, is a sweetly flavorful but rough product that demanded pairing with the smoothest reposado I could find.

That was Corazon Reposado, a mellow brew that a resident tequila snob at a local liquor store turned me onto somewhat grudgingly when I kept asking for lower prices. It did a nice job of taming Old Grand-Dad and I’m sure would play nicely with just about any bourbon. Arette, a brand from a small distiller the snob was fond of, had more fire to it but also, as I was promised, more flavor. It worked with everything but the Old Grand-Dad. There was one tequila I bought by mistake as it wasn’t called for in the recipe, which specifically requests reposado, and that was Espolon Anejo. Anejos in theory are smoother and more mellow since they’ve been aged longer than reposados but that wasn’t precisely the case here. It’s another flavorful but still pretty fiery brand. Especially when combined with the Old Grand-Dad, it was a combo that might be too feisty for many, and this is supposed to be more of a comforting sort of tipple.

We’ll be back next week, but this is the final DOTW posts= for 2020. Hindsight, as they say, is 20/20 but I think we’ll all be happy to put this year behind us. As for this Christmas and New Year’s, here’s wishing all of you a good night, safe at home.