Trending
You are at:Home»Vices»Drink of the Week: The Tom Collins 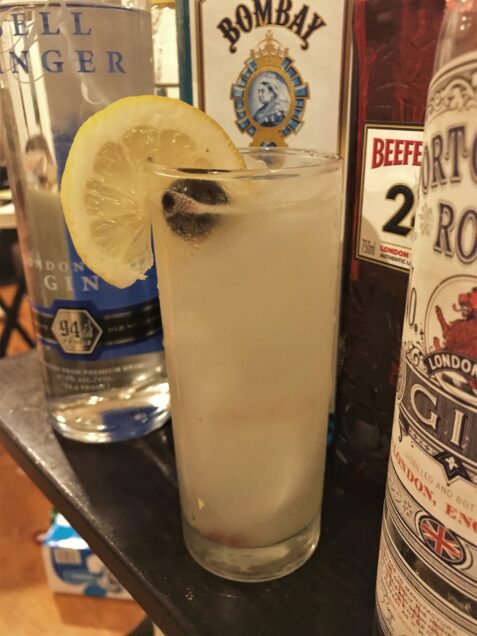 The weather forecast for this weekend has us here in the San Fernando Valley braving 100+ Fahrenheit daytime temperatures and lows above 70 (not usual in LA) — and the really hot part of Southern California global warming-era summer is only just starting. If things run true to classic LA weather form, high heat will likely stick around until just before a creepier than usual Halloween and the vastly scarier election a few days later. We’re all going to need to seriously chill and, for that purpose, the Tom Collins is hard to beat. Lemon or lime juice, sugar, carbonated water, and gin — what’s not to like?

But first, let’s talk about why many of you may never have had this super-reliable mixed drink classic.

Way back in the more innocent year of 2011, we kicked off these posts with a Bullz-Eye article I wrote covering five starter cocktails. While I was in the position of teacher, I was just a wee little unlearned cocktalian back then. The cocktail revolution that has greatly improved the drinks you’re not having in bars and restaurants right now seemed like it might be peaking. Happily, it was only just starting to kick in.

Since then, I’ve revisited the other drinks I covered in the kick-off piece — martinis, Manhattans, old fashioneds, and even bloody Marys — quite a few times. Very unfairly, I’ve ignored the venerable and simple Tom Collins for the better part of a decade.

Looking back at the recipe I featured in that article, I owe an apology to anyone who might have been trusting enough to pay attention.  It called for 1-2 ounces of fresh lemon or lime juice. No wonder it was a little sour for my taste! With the wisdom of booze age, I would now say that one ounce might be good for those who like a very sour drink but two ounces is sheer insanity.

Made with saner proportions, the Tom Collins – likely named for a 19th-century bartender whose name was actually John Collins — is a delightful, simple drink that should be on more menus than it is, though it’s far from unknown. It’s certainly easy enough to make at home if you have a juice squeezer, lemons or limes, plain sparkling water, and some simple syrup or superfine sugar on hand.

I’m sure part of the reason the Tom Collins family of drinks – we’ll be getting to some variations in a later post — are not as popular today as they should be is that, from some time in the 1950s to sometime between 1992 and last week, they were made either using sweet and sour mix <blech!> or a less offensive but now defunct style of citrus soda marketed as Collins mix. Today, we are in a more enlightened era where fresh juices are a cocktail must, and it makes all the difference.

Put the gin, juice, and sweetener in a cocktail shaker with plenty of ice and shake until you can shake the shaker no more. Strain over ice into a Collins/highball type glass (I’m still trying to figure out the exact difference). Top off with soda and garnishes. I think it tastes better if you don’t stir it after adding the sparkling water and just let it mix on its own.

I used the Tom Collins as an excuse to go on a minor gin-buying spree and already had a couple of bottles on hand. I got to try this week’s drink with Bombay Sapphire, Beefeater 24, Portobello Road,  Bellringer, and Gordon’s.

This is a very hard drink to screw up; it’s reliably ice cold and refreshing, not too sweet and not too tart with the proportions I suggest. At the same time, its pleasures are simple. The house guinea pig compared it to a hard lemonade. The cocktail snob in me shudders but it is, in fact, literally hard lemonade or lime-aid. Yes, the gin makes a difference but distinguishing between a Tom Collins made with Gordon’s, Bellringer, and the much more fancy Portobello Road (which is worth the extra $) would likely be beyond most people’s ability. I’m sure a super plain vodka Collins would be fine.

On the other hand, the slightly flowery botanicals of the Bombay Sapphire and the bracing tea-derived flavors in Beefeater 24 were a classy complement that made those iterations a discernable improvement on the others. So there’s that.

Your selection of lemon or lime juice will make a much more dramatic difference. Both are good but they are not the same. The lime juice tends to dominate more and the lemon juice is content to lay back just a bit. I think the lemon works slightly better but, if you’re a lime lover, go to it.