Trending
You are at:Home»Vices»Drink of the Week: Little Italy 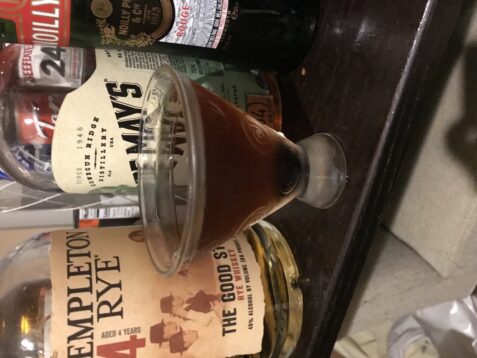 This week we’re keeping it deceptively simple with a drink that once again teaches us about the often fine line between delight and disgust.

Little Italy is the creation of Audrey Sanders, founder of Manhattan’s Pegu Club and all-around cocktalian heavy hitter. While today’s beverage might seem like a pretty basic spin on a Manhattan, it contains multitudes. Some of those multitudes are  nasty if you use the wrong brands but when you use the right ones, it’s kind of astonishing. I just wish I could explain why that is.

Combine all the liquid ingredients in mixing glass or cocktail shaker with lots of ice and stir vigorously for longer than you really feel like. Strain into a chilled cocktail glass. If you want to do it exactly like Ms. Sanders, you can garnish it with two of the very fancy maraschino cherries made with actual maraschino liqueur by Luxardo. If you don’t feel like blowing $25.00 on amazing ultra-high-end cocktail cherries, you can just use whatever you’ve got, or skip the garnish entirely. The cherry doesn’t make or break this drink; it’s the whiskey you’ve got to be careful about.

I decided to go with a rye-based drink this week largely because I had been gifted with a bottle of Clyde May’s Straight Rye Whiskey. It’s a new expression from a brand descended from a famed Alabama moonshiner. I’ll talk more about its outstanding flagship product whiskey next week but  the new rye is a very respectable entry in the ever-growing rye category. It’s getting some respectful but slightly mixed reviews out among the tasters but it works pretty great in a highball or on the rocks and the cocktails I’ve tried it with, including one of my orangey Don Draper style Old Fashioneds. It’s also beautiful in the Little Italy, to my tastebuds at least.

About Audrey Sanders’ drink. I’m a guy who enjoys the kind of bitter notes found in amaros — the bittersweet Italian disgestif’s that have brought us Campari and, with it, the Negroni and it’s countless variations. These flavors come from the more bittter than sweet artichoke-based Cynar (pronounced “chin-are,” I’m told). They predominate in the LIttle Italy in a way I found both delightful and not just deep, but profound.  My in-house guinea pig, however, found the bitterness of the first version, made with Clyde Mays, overpowering and medicinal and was not one-bit impressed. Well, nothing is for everyone and great things least of all. For me, it was maybe the best of the many Manhattan-type drinks I’ve made here.

I tried the Little Italy again with Templeton, a personal favorite and a bit smoother and simpler than the Clyde Mays. This version was less profound but delicious, sweet and user-friendly enough I contemplated making one for the guinea pig to see if it could win over a skeptic…but I’m running low on Templeton, so no way.

And then I tried it with Wild Turkey Rye, a bit harsh for my taste but a perfectly respectable brand. It just didn’t come together at all and this time the flavor tasted medicinal to me as well. Canadian Club is called rye in Canada but in the Little Italy I call it lousy. Then I tried it with bourbon — I’ll leave the name out to protect the perfectly innocent brand. Boozy Robitussin. Clearly, Ms. Sanders had reasons for specifying American rye. I would just like to know exactly what they are.