Trending
You are at:Home»Vices»Drink of the Week: The Robert Burns Cocktail 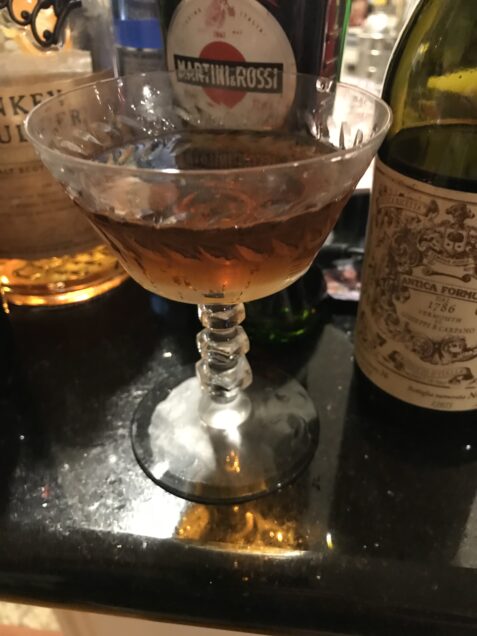 The etymology of cocktail  names is typically a murky business — often a  game of telephone spanning centuries, where the legend is often the only thing that gets printed. That being said, they typically break down into two very simple categories: 1. Named after/in honor of someone or something famous or 2. Named for the drink’s creator or a some heavy drinker who favored it.

In the case of today’s  Scotch-based cocktail, it would be only natural to assume it was named for the poet Robert Burns. Burns is a national hero and something of an avatar for Scotland, now on its way to becoming an independent nation as the UK leaves Europe and everyone leaves the UK. Burns was a rock star two hundred years before Elvis Presley. Both a lyric poet of the Romantic era and as a songwriter of sorts — “Auld Lang Syne” is one of his — and prolific in more ways than one, he died fairlly young at 37.

It might have been exhaustion. Since this post goes live on Valentine’s Day, it’s worth noting that he led a complicated and highly eventful personal life that might have exhausted Warren Beatty in his prime — especially with all the babies that resulted. Wikipedia claims that he has about 900 living descendents.

Burns was also admirable as an enlightment-era progressive who got into trouble advocating for both the American and French revolutions as well as for the end of slavery. He was also, not surprisingly, an influence on Bob Dylan. Burns also had an impact on the Bob writing this. I’m definitely more of a prose than poetry guy but I know of no short written work wiser or more campassionate than “To a Mouse.”

But, wait — it gets less interesting! No less a source than the late and very much lamented Gaz Regan found that the drink might have been named after a cigar salesman who frequented the Waldorf-Astoria bar in New York that claims credit for the Robert Burns Cocktail. It’s not clear whether the cigar guy was from Scotland but there must have been a reason why the drink is a clever variation on the Scotch-based Manhattan variant, the Rob Roy Cocktail, named for another hero of the highlands.  Personally, I wouldn’t be surprised if the canny bartender who created this drink might have had the name doing double duty to please the ego of cigar-peddling Robert Burns while also honoring the great poet.

In any event, it’s a blend of sweet, bitter and woody flavors that has a fairly broad appeal. It pleaseds the inhouse guinea pig but it’s probably not for complete cocktail newbies as there’s nothing wee about the Robert Burns It is definitely a beverage worthy of a great wordsmith, though the cigar salesman was probably okay, too.

Combine the ingredients in a mixing glass or cocktail shaker. Stir vigorously and strain into a chilled cocktail glass. Toast the land of Scotland, the poets of old, and the cigar salesmen, if you’re in the mood.

******
On a recent Scotch-centric Life Behind Bars podcast, cocktail historian David Wondrich and Daily Beast cocktail editor Noah Rothbaum made the point that, for all the attention given to single malt Scotches since the 1990s, blended Scotches can be just as good and — for cocktail purposes — usually preferable. That definitely applies here.

This version is the one promoted by Robert Hess but there are numerous recipes that mainly vary in terms of how much of the base spirit is included. I used Ballantine’s but I’m sure something like The Famous Grouse or your basic Dewar’s or Cutty Sark would be just as good. Wanting to try something a bit more upscale, I picked up a bottle of Monkey Shoulder. A newer brand which has very understandably been gaining in popularity. It’s very smooth and less astringent than most Scotches. I like it an awful lot but I’m not sure it’s used to its absolute best advantage on the Robert Burns.

As for sweet vermouth, Martini worked just fine and was definitely a good choice with the Monkey Shoulder, as it has a bit more spike in its flavor profile to compensate for the smoothness of the Scotch. Carpano Antica, very much the Cadillac of sweet vermouths, was overly dominant with the Monkey Shoulder, alas. However, combining the high-end Carpano with the mid-market Ballantine’s produced delightful results.

And, please, don’t forget the bitters and especially the absinthe or substitute liquer. I’m not a big fan of anise flavor on its own, but it’s completely crucial to the blending of the sweet, bitter, woody, and tangy flavors of what can be a really great cocktail, but not as great as Robert Burns’ To a Mouse. Read it and weep, because it’s beautiful. If your best laid plans have never gang aglaye, I don’t even want to talk you.

And here’s a song from one of my favorite movies, with lyrics by Burns. He definitely took the dictum “write what you know” to heart.