Trending
You are at:Home»Vices»Drink of the Week: The Rosita 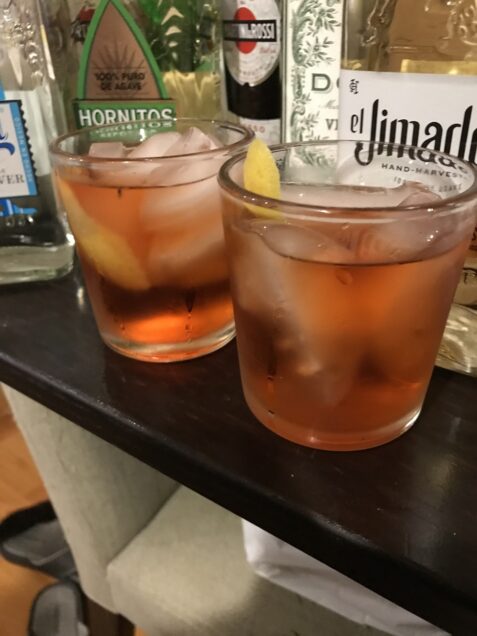 I’m not sure how I’ve missed the Rosita, a very cool spin on a Negroni all this time. I’ve been a fan of both negroni-type drinks and tequila based cocktails long before either was a craft bar staple, but here we are. I found it leafing through Robert Hess’s The Essential Bartender’s Guide and I was immediately taken by his description: “This is an excellent cocktail to celebrate, rather than mask, the flavor of tequila.” He’s right. If you like bittersweet flavors and the taste of agave, this drink is for you.

The Rosita is a drink with no stories behind it and it seems to have come out of nowhere. So, no history but so what? I

Combine al of the liquid ingredients in a mixing glass or cocktail shaker with lots of ice. Stir vigorously and strain into a rocks/old fashioned glass filled with fresh ice and add the twist.

Robert Hess says to go with silver tequila but many of the recipes online say reposada and some say mezcal, which I’d really like to try some time. I tried it with types of tequilas ways and it’s a bit of wash. High end blancos Casa Noble and Roca Patron wwere pretty damn marvelous with both Dolin and Martini vermouth, with the agave flavor emerging from the bitter and the sweet to nice effect. Not quite Venus emerging from the clam shell a la Botticelli but maybe closer to Ursula Andress emerging from the waters of the Carribean in Dr. No. No, not really, but it’s a lovely effect anyway.

Moving over to Hornitos Reposado — which is really very decent stuff — nevertheless only seemed to emphasis the less pleasant flavors of both the tequila and vermouths. Not satisfied to have that be the last word on reposados and the Rosita I went out and purchased el Jimador’s reposado which is about one step up in terms of quality on its own. In the Rosita, though, it was a definite improvement and made for a lovely blend of bitter and sweet.

At some point I started forgetting to include the bittes. After all, Campari is itself a bitter.  Still, when I went with Sauza — the brand Mr. Hess himself uses in his video version of the recipe from 2012 and failed to include the bitters, something was lacking. Sure enough, tried it again with bitter and it was delicious. Bitterly delicious.