Trending
You are at:Home»Vices»Drink of the Week: Harrington 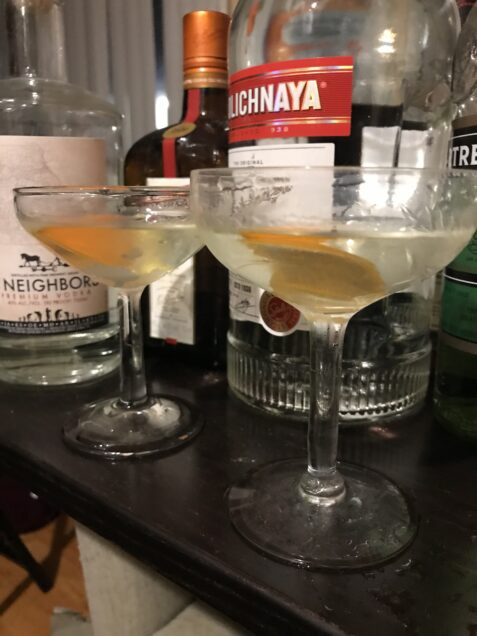 Cocktailians these days generally prefer beverages that are garnished with stories that go back to the boozy golden age that was pre-prohibition America. Today, however, we’re discussing a drink that touches on some real more recent, but no less important, cocktail history. We’re going back to the first dawning of cocktail revivalism — the magical era we call the 1990s!

Now an architect, in his not-so-misspent youth Paul Harrington was one of the original cocktail revivalists and, I gather, played a particularly important role in the Berkeley-adjacent town of Emeryville, California, best known as the home of Pixar. Indeed, just three years after the 1995 release of “Toy Story” Paul Harrington, then a bartender and a cocktail writer for Wired, released one of the first books that helped make your mixed drinks taste so much better. 1998’s “Cocktail: The Drinks Bible for the 21st Century.” (I just ordered my copy, so don’t feel bad.)

I actually found Harrington, the cocktail, in another important book in the post-millennial cocktail revolution, Robert Hess’s “The Essential Bartender’s Guide.” Hess notes that Paul Harrington referred to this week’s beverage as The Drink With No Name. While that may have some nice associations for fans of Sergio Leone and Clint Eastwood, Hess correctly determined that this was a drink worth naming, and so he chose to name it after its creator.

Harrington, the drink, is notable because it is pure cocktailian in construction with one unusual feature: it uses the base spirit that is both the most popular among the masses and the least respected by cocktail snobs — vodka.

Combine the liquid ingredients in a mixing glass or cocktail shaker with a lot of ice. Stir vigorously for a good while and strain into a chilled, not very large, cocktail glass. Add the twist of orange — the proverbial Lebowski rug that pulls the beverage together.

As David Wondrich is supposed to have correctly observed, “vodka is the boneless, skinless chicken breast of mixology; it’s all about the sauce.” The brilliance of Harrington is that it takes that idea and strips it down to its basics by adding super-interesting “sauces” in very small amounts so that their distinctive flavors can really go a long way.

Cointreau is a very adult liqueur. Indeed, I’ve only started really like it lately, and I’ve been over 21 for way too long. It is to triple sec as — yes, I’m going there — a Martin Scorsese flick is to a Marvel movie. More complex, nuanced, and bitter.  Even more depth of flavor comes from Green Chartreuse — a very sweet, very floral, very sharp, and very boozy liqueur at a shocking 110 proof. Put these things all together in the proportions above, and you’ve really got something.

I do think the drink worked slightly better with Russia’s least controversial export, Stolichnaya — which once upon a time was considered the best there was in the US market…it also appears that none of its proceeds go into Vlad Putin’s pocket or I’d be the first to boycott it. The American vodka I used, 8 Neighbors, was slightly less good — but maybe that was in my head because it’s not from Austin like Tito’s. Hard to say but how different, really, is one boneless, skinless chicken breast from another?

I decided, however, to try Marvel…I mean Bols triple sec — instead of Cointreau. Good but less memorable. Like…oh, never mind.