Trending
You are at:Home»Vices»Drink of the Week: The Angel’s Share 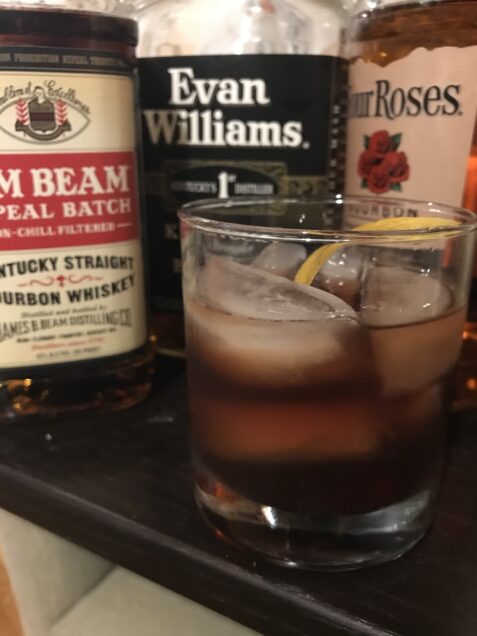 It’s not surprising that there’s more than one mixed drink called the Angel’s Share. The phrase refers to the small amount of liquor lost to evaporation during the aging process of spirits.  Cocktails aside, it’s the name of a very good premium bourbon which the PR gods sent me and I  wrote about years ago — that post seems to be lost to time and Google. It’s also the title of a pretty good comedy-drama quasi caper film about the Scotch business from 2013 by Ken Loach.

In any case, I think today’s easy to make concoction, with the inclusion of the alleged digestive assistance of an amaro, will be a highly satisfactory way to ease your post-Thanksgiving recovery.  On the other hand, it’s easy for us cocktailians to forget that not everyone keeps the liquor cabinet stocked with amaros and French liqueur. Maybe there’s a holiday blow-out at your local liquor booze big-box.

Combine the liquid ingredients in a mixing glass or cocktail shaker with lots of ice. Stir vigorously and strain into a rocks glass with fresh ice. Add your orange or lemon twist and sip. I’ll leave it to you whether or not to thank any mystical beings.

Easy to make, potent, fruity-sweet and bitter in just the right way — and somewhat refreshing to boot — today’s drink kind of rules. Even my occasionally bitter-averse in-house guinea pig very much approved. It may be slightly overstating the case to say that the Angel’s Share is heavenly, but not really by all that much. Highly recommended for people like me who live a good balance of bitter and sweet.

I should add that, not only is there more than one drink called the Angel’s Share’s, there’s also more than one version of this particular drink. In most cases, I tend to prefer the up version of a drink to the on-the-rocks version but I thought this particular combination likes a bit more ice, no bitters beyond the amaro, and a bit more booze to open itself up and that was the recipe I stole. If you like your flavors a bit more concentrated, Imbibe has the recipe I tried first. It’s also good though more challenging.

Most of the bourbon brands I tried are pictured above, but not all. Evan Williams is my usual downmarket default, and it was just fine. More interesting was the Jim Beam Repeal Batch, which celebrates an apparently lost style of pre-prohibition brewing with some pretty interesting results. It’s also danged inexpensive. Four Roses (which has been selling at pretty unbelievable prices in California stores as of late) was it’s usual reliable self for a high quality beverage. Nevertheless, the award has to go to Knob Creek, a great old premium brand with a famously big flavor that gave itself a very interesting plug on the last episode of the Life Behind Bars podcast.

Moving on from the bourbon, I stuck with two current amaro favorites that I have on hand, Razotti and Amaro Nonino. Though I quite like the coffee-esque flavor of the Nonino, I consistently enjoyed the results more with the fruitier Ramazotti. Still, I encouage you to try this with whatever you have on hand. Would Montenegro be too sweet or even more delightful? Only one way to find out.

Finally, we move on to our creme de cassis, a liqueur made with black currants. I started out with Mathilde, which was delightfully sweet and rich — sort of like a really excellent preserve. When that bottle became deceased, I moved on to Lejay, a brand dating from the mid-19th century with an intriguingly astringent edge and maybe a hair less sweetness. Even at just a tablespoon, together with Knob Creek and Ramazotti, I reallly think it completed my finest itation of the Angel’s Share. Just a perfect balance of the bitter, the sweet, the fruity, the floral and, of course, da booze.