Trending
You are at:Home»Vices»Drink of the Week: Rosemary’s Baby 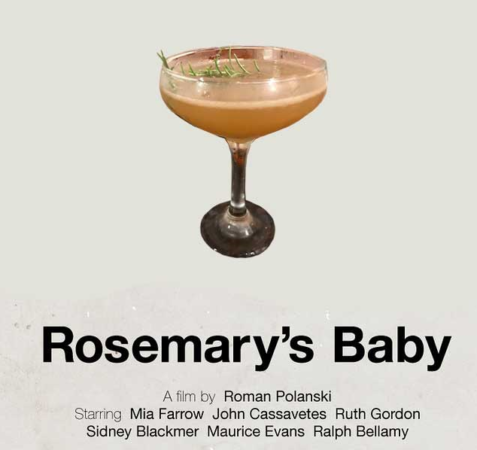 It’s probably not entirely coincidental that Roman Polanski’s film version of “Rosemary’s Baby” and George Romero’s “Night of the Living Dead” were both released in 1968. Just as the Summer of Love in Haight Ashbury was becoming the autumn of ODs, Martin Luther King and Bobby Kennedy were assassinated, and as the nation’s collective stomach was beginning to turn as the bloodshed in the Vietnam War seemed neverending, the collective unconscious was veering towards the morbid and the apocalyptic — something both movies provided in their own madcap ways. It was also just prior to the rating system so more than a few youngsters saw horrifying masterpieces that, each in their own way, creeped the hell out of grownups. Many, not me, were happily warped for eternity. I couldn’t work up the guts to even see “Rosemary’s Baby” on TV until I was the ripe old age of 10 or 11. Romero’s film had to wait until college…and I haven’t seen it since though I remember it so well I hardly need to.

Since it’s less visceral — both figutatively and semi-literally — “Rosemary’s Baby” is more my speed and I’ve probably seen it at least 10 times. It’s disturbing in a fun way, but it’s also ultimately a movie about mother-love conquering all. All darkness but with a sweet edge. Such is our compassion for its titular heroine (Mia Farrow) that we are basically willing to accept any Faustian bargain that ensures her safety. As for the baby…well, most newborns aren’t all that cute anyway.

As you might guess, there are a number of cocktails online named after the movie and they all seem to have rosemary in them. I like this one quite a lot and it’s posted on Liquor.com; other than that, it’s source is unknown to me. Could it be….Satan? I’m not sure where the Evil One tends bar, but this is a drink that will help you face the darkness that occasionally threatens to devour us all. And, hey, at least you’re probably not married to someone who sells you out to an evil deity for a few career breaks. Right? Stop worrying about a demonic apocalypse and a dead Jehovah and have a nice, sweet drink

To make the syrup, just heat up equal parts water and brown sugar with 1 sprig of rosemary for every half cup. Bring it to a boil, remove it from heat and refrigerate it. You can probably use it within a couple of hours and use whatever is left over to make yourself a lovely Old Fashioned or two.

Next, combine the syrup and all of the other liquids in a cocktail shaker with lots of ice and shake very vigorously. In addition to your regular cocktail strainer, put an additional kitchen strainer to double strain the drink into your chilled cocktail glass. This will make the drink a touch less sour by filtering out the pulp. Garnish with a sprig of Rosemary and sip. Remember not to accept questionable herbal beverages from Ruth Gordon.

The original recipe for this drink calls for the equivalent of 1/2 ounce of syrup. I liked the drink that way, but when I made it with 3/4 of an ounce, the balance of sweet and sour reached a diabolical zenith.

My bourbons were the last of my bottle of Maker’s Mark, Four Roses, and 100 proof Knob Creek. They were all pretty marvelous but those who like to be reminded of the alcohol they’re drinking, even in a refreshing sweet and sour treat may prefer something with an extra demonic kick.