Trending
You are at:Home»Uncategorized»Drink of the Week: The Royal Fizz 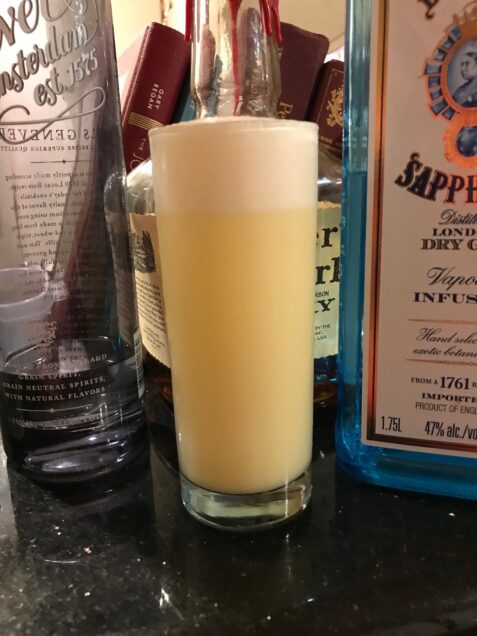 It looks like Monday’s autumnal equinox is kicking in a bit quicker than usual here in LA, where summer usuallly tends to linger well into October. Fortunately for my heat-averse self and my electic bills, LA autumn weather (highs in the 70s, lows in the 50s chilly!) should be upon us by the time you read this. So, it’s probably time for me to wrap up my recent experiments in high boozy refreshmentwith one last fizz.

For me, the defining ingredients of a fizz are chilled soda water and egg white, though the original gin fizz — sometimes called the silver fizz — is also a sour in that it contains lemon and sometimes lime juice combined with sweetener.I wanted to go in a slightly different direction, egg-wise.

One variation contains egg yolk instead of egg white. However, somewhat to my surprise, I found that  a little too sour and, without the white, harsh. Perhaps it’s just as well because I don’t really feel like promoting a drink called the Golden Fizz.

The Royal Fizz, on the other hand, contains the whole darn egg. As a fizz with a lot of lemon, it’s pretty different taste experience than flips, another favorite category of drink featuring a whole egg in a much more desert/noggy context.

Combine all of the ingredients except for the soda water in a cocktail shaker with no ice. Give it the old ice-less dry shake for enough time to fully emulsify the egg  white and yolk, maybe 10 seconds. Next, add lots of ice and shake some more for as long as you can stand, say 15-30 seconds. Strain into a chilled highball glass. Top it off with cold soda water. You can drink it right away, but it will look prettier if you take a moment for the foam cap to separate from the balance of the drink.

The main thing you’ll notice is that leaving the yolk indeed adds some richness, but it also emphasizes the sour flavor of the lemon somewhat. I tried to fight this by turning this into a bourbon beverage, but using nicely sweet Maker’s Mark was surprisingly similar to Bombay Saphhire. Rather than overemphasizing the sour notes, the citrus-heavy Tanqueray Rangpur was the smoothest of the bunch and a real delight. Even better, however, was Bol’s Genever, the sweeter, maltier ur-gin. For some reason, genever’s sweetness contributed more to the flavor of the drink than a good bourbon’s sweetness. There’s some malt there and fruity, cherry like flavors linger, as will the memory of my last very last fizz of this shortened 2019 L.A. summer.