Trending
You are at:Home»Entertainment»Movies»Movie Review: “Stuber” 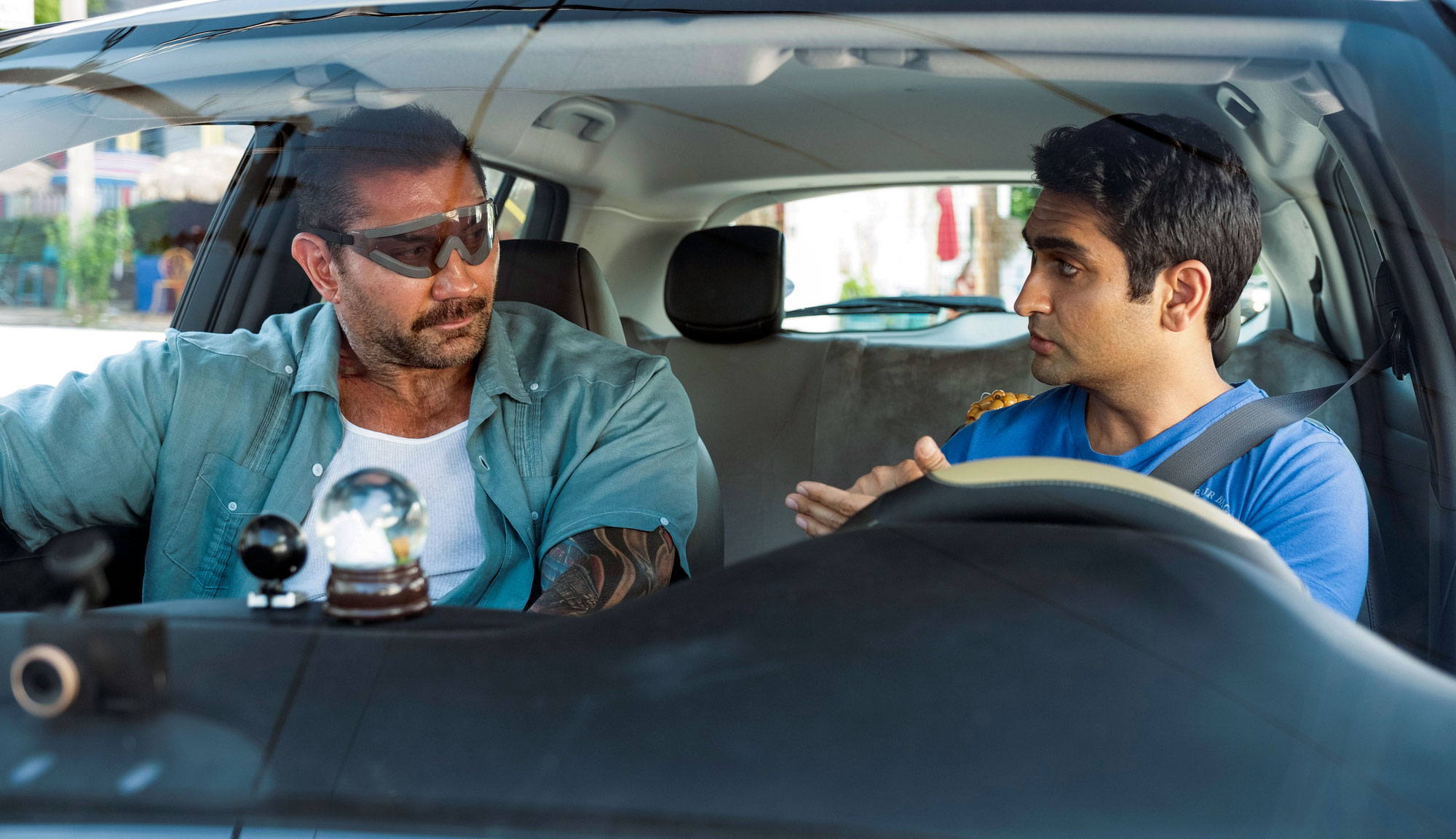 A movie like “Stuber” would have been just about impossible a decade ago. The new comedy starring Kumail Nanjiani and Dave Bautista can only exist in a world where the ubiquity of cabs has been replaced by a new era of ride-sharing apps and regular people driving total strangers from destination to destination in an attempt to make ends meet. Plenty of movies have been made about cab drivers over the years, and while Ubers and Lyfts offer the same basic level of service for those who take them, the drivers are often not nearly as seasoned as cabbies tend to be. That gulf of experience can make for plenty of interesting stories, both real and imagined. It was only a matter of time until someone mounted a major studio film revolving around the ride-share driver concept, and “Stuber” is just that movie.

The driver in question here is Stu (Nanjiani), who works at a sporting goods store by day and drives for Uber by night in order to generate enough cash for a down payment on a spinning studio with his friend and secret love Becca (Betty Gilpin). When Vic (Bautista), a grizzled and gigantic cop, orders a ride to replace his incapacitated vehicle, Stu has no idea what he’s gleefully walking into. Vic is looking to avenge the death of his partner (Karen Gillan) at the hands of an infamous drug dealer (Iko Uwais), who went underground six months earlier. Unfortunately, his reappearance coincides with Vic undergoing Lasik surgery, robbing him of his sight for 24 hours while he recovers. That won’t stop him, though, and his desire for revenge causes all sorts of problems for his police captain (Mira Sorvino) and daughter (Natalie Morales), not to mention the havoc he’s intent on wreaking on a guy who’s just trying to make a living and keep his driver rating above four stars.

The best way to think of “Stuber” is as a comedic take on Michael Mann’s “Collateral,” built around the odd couple experience of an innocent driver forced to become chauffeur against his will for an increasingly dangerous and unpredictable client. Vic is a good guy, which changes the dynamic quite a bit, though his methods might convince you otherwise at times. From a story perspective, “Stuber” could not possibly be more generic if it tried. The script, from relative unknown Tripper Clancy, hits all the beats anyone would expect this movie to hit, slowly establishing a rapport between Stu and Vic as they get into increasingly outlandish circumstances well beyond the comfort level of a mild-mannered guy just trying to make ends meet in the sort of world where people invite strangers into their cars with a smile. Vic isn’t one job away from retirement or anything, but the movie sure treats him that way, couching this as his one final chance to get some closure on a traumatic event.

Given the complete lack of oomph in the plot, director Michael Dowse relies on the quality of his casting to make “Stuber” worth watching, and generally, he succeeds. Nanjiani is still a bit removed from the mainstream even after receiving an Oscar nomination for “The Big Sick,” but it’s roles like this that could help get him there. Dowse gives him plenty of leeway for improvisation, which helps punch up the limp scripting. Bautista handles himself well both as the overly serious straight man and as an action star; he’s continuing to build a resume as the most interesting actor to make the jump from the wrestling ring to Hollywood. The two stars get the vast majority of the screen time, which is good because the support is a little thin. Iko Uwais, who is best known for the “Raid” movies, is a complete blank slate of a villain, with no shade of personality or mystery beyond some solid martial arts, while Mira Sorvino might have three scenes total. One of the few highlights is Jimmy Tatro as Stu’s idiot bully boss. He was among the best parts of the first season of “American Vandal,” and that empty-headed shtick translates well to the sort of guy who inherits a management position from his father but is still mentally a high schooler at best.

There’s a workmanlike approach to “Stuber” that seems to match the rather straightforward script. The various shootouts, fistfights and car chases are technically fine but unremarkable, and yet despite its shortcomings, “Stuber” is surprisingly effective as an easy, breezy buddy cop comedy. Maybe I’m giving it more credit than it deserves, and maybe that has something to do with how dire this summer has been for entertaining movies, so it gets the benefit of being graded on a generous curve. All of that is thanks to Bautista and Nanjiani, who consistently punch above the cliché-ridden script. “Stuber” is honestly not the sort of movie anyone’s going to remember six months from now. Even with its charismatic leads, there’s just nothing of substance to hang onto. But in the middle of an increasingly staid cineplex filled with sequels and prequels and reboots and remakes, something like “Stuber” at least manages to feel different.