Trending
You are at:Home»Vices»Drink of the Week: Old Hat 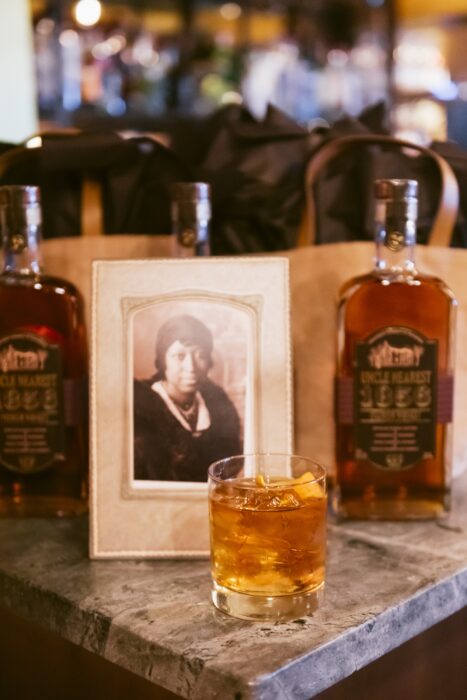 I’m not always the best about hitting all the most widely celebrated holidays with fitting cocktails, but fate and an outstanding new brand of whiskey has given me a reason to promote a holiday two few of us know about.

Juneteenth, which is this Wednesday, July 19th, is now a general celebration of the end of slavery in the United States, but it began as the day in 1865 when a Union Army general declared the end of slavery in Texas. A decade prior to that, an 8-year-old white boy named Jack Daniel began an apprenticeship on a Tennessee farm under the tutelage of Nathan “Nearest” Green, a slave and a master distiller.

As Wikipedia tells it, shortly after the end of the Civil War and the coming of emancipation, Jack Daniel, Nearest, and three of his sons started producing the first version of what is still America’s most popular whiskey brand. You know the one. What distinguished it from standard bourbon was a charcoal filtration technique now called the Lincoln County Process. An extended commercial/short film featuring the super-thespian Jeffrey Wright (“Westworld,” etc.) suggests the process was derived from African techniques for purifying water.

While the precise facts of these things are somewhat murky, it really does seem as if Nearest and Jack pretty much invented Tennessee whiskey, along with America’s most ubiquitous whiskey. Yet another distinctly American work of genius blending African and European influences.

I’m feeling pretty lucky to be able to honor what I hope eventually becomes a fully-fledged national holiday with Uncle Nearest 1856, quite likely the most readily sippable 100 proof whiskey I’ve tasted — the free bottle only means I got to taste it; it’s not cheap and I am. It’s an outstanding basis for an Old Fashioned and a multiple award winner for very good reason. And, naturally, we have a cocktail developed by some talented mixologist associated with the brand. It’s a very good one, but you have to know how to follow instructions!

Combine all the ingredients except the orange peel in a mixing glass or cocktail shaker without adding ice. Stir a second just to make sure the salt is fully dissolved. Add lots of ice and stir vigorously. Strain and pour into an old fashioned glass over fresh ice. If you want, stir it some more. Add the orange twist. Sip and think about what freedom really means. If you’re having trouble, imagine what it would feel like to not be free. You can do it, and it sucks.

Considering the significance of Uncle Nearest and Juneteenth, I wish I had something more profound to say about the actual making of this week’s drink than to underline the importance of following a good recipe, but there you go. I actually made a number of interesting mistakes that pulled the rug out from under the Old Hat, a mixed metaphor that explains why you’re not supposed to use mixed metaphors.

First time around, I decided to go extra fancy and instead of using regular old table salt, I ground some sea salt into the drink, figuring that the room temperature whiskey would dissolve the salt well enough. The version of the drink proved to be rich, probably too rich. I thought it was a decent after-dinner beverage, but it was definitely more like a booze-heavy tiramisu than a great cocktail. I don’t think the salt was very present in that one.

Realizing my mistake, I used standard table salt on my next attempt. Somewhat unwisely, I tried to cheat on the whole “pinch” business by using 1/8 of a teaspoon, figuring that would be close enough to an actual finger pinch. More importantly, I forgot all about the maple syrup. Now, the St. Elizabeth Allspice Dram I was using is quite rich and sweet on its own and I actually liked this version more than my first try, since it wasn’t excessively sweet at all. However, my in-house guinea pig suggested that it was kind of on the salty side and seemed like it could accompany a meat sandwich of some sort. I couldn’t refute that, especially once I realized I’d left out the primary sweetener.

Chastened, my next try was by the book. I felt wasteful, but I put some salt in my right hand and literally pinched a fingerful of salt for each of the two drinks I was making, tossing the excess salt away. I carefully used the required teaspoon of maple syrup and followed the rest of the instructions to a T.

As your teachers no doubt informed you, carefully following instructions pays off. It was the kind of drink I’m always hoping for, almost perfectly balanced. The properly dissolved table salt and the hefty helping of bitters rounded out the drink perfectly, hitting all four tastebud quadrants while also allowing the complex and just slightly fiery sweetness of  100 proof Uncle Nearest to come through. Now it was a drink that you could justify either before dinner as a kind of augmented Old Fashioned, or after dinner as a dessert drink for grownups.

Then I made my final mistake. Curiosity got the better of me and I tried another premium Tennessee whiskey in the Old Hat. No disrespect to Brand X, it was not so great. Really. Don’t be a fool like I was. If you want to make this drink, you’ll have to spring for a bottle of Uncle Nearest. At about $55-60 for 750 ml bottle here in California, it’s worth spending that kind of money on if it doesn’t mean the cat will go hungry.

And now, a word from this week’s unjustly ignored holiday.