Trending
You are at:Home»Vices»Drink of the Week: The Gimlet (redux) 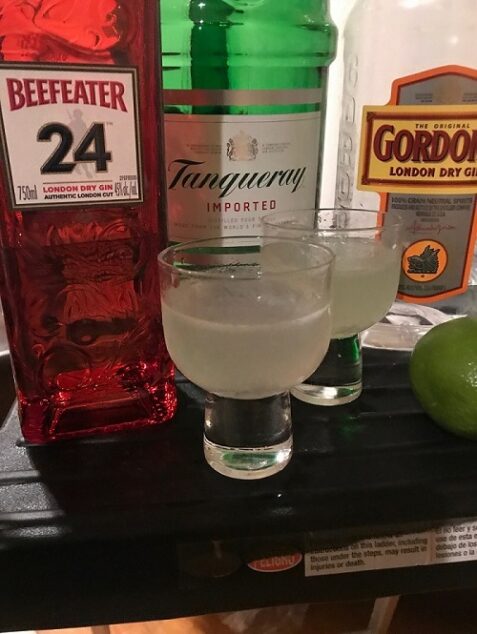 In the very, very early days of this blog series, when I was still using the annoying “royal ‘we,'” or, as I sometimes think it should be called, “the second person precious,” I took on the Gimlet. The accompanying picture at that post has long since disappeared from the platform, and the writing isn’t my best. As for the drink itself, that version consisted of gin and Rose’s Lime Juice, a heavily sweetened product.

Now, one of the prime directives of modern-day quality cocktail making — you might call it Dale DeGroff’s first commandment — is “thou shalt use fresh juices.” The Gimlet, of course, is not modern but classic and it’s kind of been great grandfathered in as an exception. Rose’s has been a companion to gin since it was famously used to repel scurvy and improve the mood on 19th-century English warships.

As far as I can tell, the current cocktailian dogma regarding the Gimlet is that, while the original 50/50 proportion is to be avoided, a true Gimlet is to be made simply from gin and Rose’s with proportions to taste. When I wrote the original post, I was inclined towards the traditional approach and suspicious of other methods.

I now think I was wrong. You see, earlier this week it struck me that I hadn’t really given making the drink with fresh lime a fair shot. It’s basically just a very simple gin sour made with lime juice, but it’s pretty darn good when you get it right.

Combine the ingredients in a cocktail shaker filled with ice and shake very vigorously — you want this one to be cold and icy. Strain into a well-chilled cocktail glass and be thankful that Rose’s isn’t our only limey choice.

Considering what a simple drink this is, it shouldn’t be surprising that your choice of gin is going to make a big difference. I used Gordon’s, Tanqueray, and Beefeater 24, which I think will become one of go-tos from now on. Wth all due respect to the venerable regular Beefeater. I like the gentleness and a hint of something that could almost pass for sweetness; interestingly, some of the more bitter flavors come from Asian teas.  It pretty delightful here, kind of light and tingly on the tongue.

Going back down the scale a bit, Gordon’s, which is a bit less herbal forward than more expensive brands, was delightfully mixable in the drink, especially when I used simple syrup. When I tried superfine sugar instead of syrup, I found I could dial the sweetener back slightly to just two teaspoons. My household guinea pig thought that last version actually tasted sweeter than earlier iterations. I thought it also let the lighter botanical flavors of Gordon’s carry through a bit more, though I wasn’t 100% sure that was an improvement. Tanqueray is definitely the most robust of the three gins. It had a sharper flavor that seems to require the full force of sugar or syrup.

Now, it must be said that Vodka Gimlets are extremely popular. Though we cocktail snobs tend to look down our noses at the plainest of all spirits, it’s an alternative I’m supposed to tell you is simply not for the serious drinker. Maybe so but it’s gosh damn delicious. Who wouldn’t love alcoholic limeade?