Trending
You are at:Home»Vices»Drink of the Week: The Irresolute Cocktail 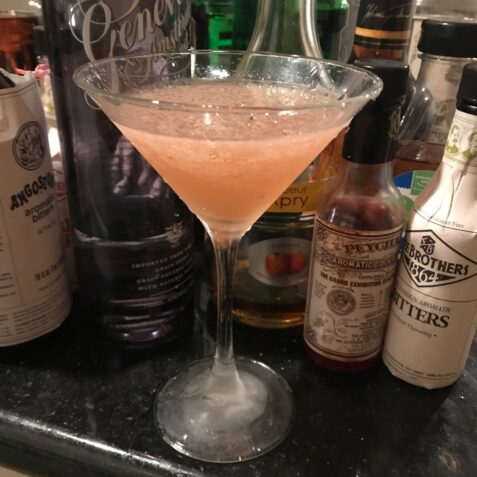 If you read last week’s post, you probably gathered that I wasn’t all that resolute about the Resolute Cocktail. My misgivings were largely dispelled this week, however when I made a simple change. Substituting standard London dry gin for it’s malty, sweeter ancestor, genever, made for a drink that was not only sweeter but richer. I then tried dialing back the rather large amount of lemon juice and super-sweet apricot liqueur in the drink, and adding some agave syrup and bitters. Even better. Sweet, but not tiki sweet and definitely not insipidly sweet.

I feel strongly that my Irresolute Cocktail is the superior beverage to the Resolutes. Besides, we indecisive Hamlets of the world need a cocktail, too.

Combine the ingredients in a cocktail shaker with lots of ice. Shake very vigorously and strain into a chilled cocktail glass. Sip and contemplate the benefits of not always being so goddamned sure about things.

****
I primarily stuck with Bol’s Genever, which borders on being the default genever at most watering holes, at least here in Southern California. I tried two different brands of apricot liqueur. Marie Brizzard Apry is only a few bucks more than De Kuyper Apricot Flavored Brandy (which isn’t really brandy in any meaningful sense). On its own, the latter is nasty, I’m sorry to say, and it did the Irresolute no favors. I might as well have added Robittusin. MB is harder to find but definitely worth looking for.

I did the lion’s share of my experimenting with the bitters and I think this is a drink where they may matter more than usual.  I started with the definite default aromatic bitters, Angostura, and it was a very nice drink indeed, with sweet and sour flavors coming together in a light embrace. Even so, I slightly preferred the more spice-heavy Fee Brothers Old Fashioned bitters in the Irresolute. The cinnamon notes made for a rounder flavor.

The gentler Peychaud’s, which has peppermint and anise notes (cardamon, too?), results in a taste that I would compare to grandma’s hard candy, if it were actually good. It was definitely my favorite, but then my sweet tooth is stronger than many cocktailians. If you fear too much sweetness, go with the Angostura, Fee Brothers, or something similar. If you want some delicious adult  candy, I can say with some resolve Peychaud’s is the better choice, probably.