Trending
You are at:Home»Vices»Drink of the Week: The Suffering Bastard 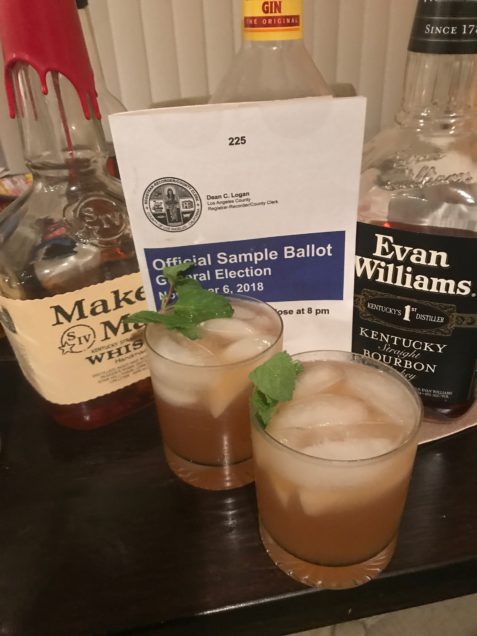 Who is the suffering bastard? Well, right now, it’s not me. My parents were long married when I was born and I’m quite okay at the moment. The drink was likely named for bastards who are more on the inglourious side. According to legend anyhow, the Suffering Bastard helped English soldiers in Egypt defeat both their hangovers and Rommel’s forces during World War II. That’s the war during and after which it was generally assumed that being a Nazi or a fascist was a bad thing. That wasn’t necessarily the case before the war in all places, but a couple of years back who would realize that we would have to re-litigate the question of whether or not some Nazis…I mean white nationalists…can actually be good people.

I’m in a funny mood. I spent the majority of the last couple of weeks obsessing over, and doing a little work on, the elections in which democracy might just have been saved. I can’t say that the Suffering Bastard helped me participate in my own personal battle for freedom and liberty, but it did help me unwind afterward. Right now, it tastes a little bit like sweet revenge.

Build in a large glass over ice. Stir, top with ginger. If you like, stir again and add more ice.

My gins were Ford’s, Beefeater, and Gordons. My bourbons were Maker’s Mark, Evan Williams, Old Forester Bonded, and Wild Turkey 101. My ginger brews were Vernors, Canada Dry and a ginger beer that I can’t remember the name off because I recycled the bottle already. My limes were green and from trees.

Since this was a drink that was developed largely to overcome the effects and/or flavors of inferior alcohol, it’s not surprising that the booze — and odd combo of base spirits, there’s no denying — is really more of a supporting player in the flavor profile. The ginger brew and the the lime juice predominate with a sort of boozy sweet undercurrent that changed in ways so subtle I can’t really describe them. Or maybe I’m just too tired too describe them. In any case, using Gordons, which is less strong and less strongly flavored than more premium London dry brands, made for a mellower bastard. Similarly the less spicy, more sweet Canada Dry played nicer than the more gingery sodas.

And now, a funky benediction to two controversial ideas: freedom and justice.